My daughter was taking herself and Fifi for a pampering session today, haircut, nails done, spot of lunch, must be nice, better life than I have got, but the plus side was I got Bob all to myself, don't get much alone time with them as have them overnight one day a week and they usually get picked up in time for them to go off to school. But as its the holidays they don't need picking up early and I have time to do something with them.

So I decided as Fifi was going to have some fun that Bob and I would have some too. Whilst I appreciate that to a 4 yr old it is playing Monkey roll ball on the wii, its not quite my idea of fun, so I decided we would do some baking.

As you will know if you have read my introduction this is easier said than done with a child like Bob and his multiple allergies, but not impossible and certainly cheaper than buying this sort of thing with him, as the very limited range suitable for him is offensively expensive, I mean how can you take out all the wheat, gluten, dairy, egg and nuts but still change an arm and a leg?

Have been using a bog standard recipe for a while but it doesn't keep well, doesn't look to appetising, and you need 2 sets of teeth to chew it once it has gone cold. So I have been doing some research and some experimentation and have come up with a few differing recipes that fulfil all the criteria required, and are not too tedious for Bob to join in making. He doesn't mind helping with some bits of it but has limited concentration and tends to get bored easily.

So I headed off to the supermarket at 7.30 am this morning to buy bits and pieces after deciding what we were going to make today. I picked up some Doves Farm SR flour and Doves Farm Rice Flour
as my starting point. I also bought Natco Corn Meal  to compliment the other two.

The Dove Farm packets (like many other)have recipes on the back, and there is a brilliant sponge cake recipe that makes a nice moist cake that works well as small cakes as well as the large sponge. In comparison to the older recipe that I used this is a vast improvement, and as it has oil in stays moist and edible for 4 or 5 days after you make them ( ha ha funny I know), the banana and vanilla essence compliment each other nicely and if you use lemon essence instead then they have a nice tang to them. It is a quick easy recipe that just needs a very quick simple stir and pop it into the oven.

Next we made Shortbread, and again have done this with just ordinary gluten free flour and found them a bit dry, so found a recipe that mixes Corn meal and rice flour  together to (hopefully) give a lighter biscuits that doesn't fall apart as easily. So found a recipe on http://allrecipes.co.uk/, which has a great search box to eliminate what you want or don't want in your recipe. The biscuits did indeed turn out just like normal shortbread, Bob cut varying shapes with biscuit cutters and once cooked they had a very pleasant flavour, and would even be nice with icing on. 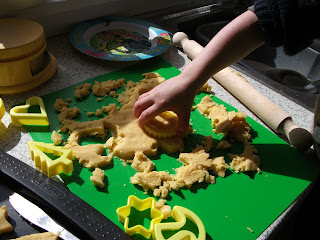 lastly we made Bobs Blobs as we are calling them, an adapted recipe from an age old one we used to make many years ago when my own children were young.
mix half a cup of corn flour and half a cup of rice flour with 1 teaspoon of gluten free baking powder,  half a teaspoon salt and 1/4 cup drinking chocolate powder ( milk free in our case), add 125g soya margarine and mix in with  a fork to a crumbly but very dry mixture, then add approx 1/4 cup of rice milk to mix together to a soft consistency that sits on a spoon in a blob. Spoon blobs onto a baking tray, flatten slightly with a fork and cook at 200 C for approx 20 mins. 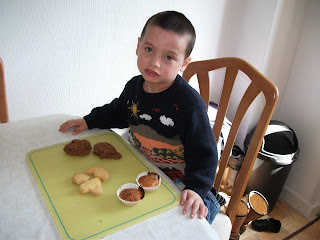 and here is Bob with the finished results, and very yummy they were too. 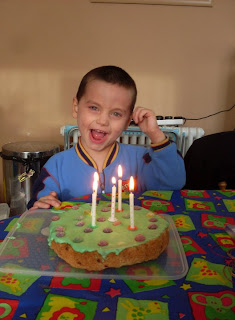 I also used the sponge cake recipe to make his birthday cake, nice enough to be eaten by everybody not just him, and here's the birthday boy blowing the candles out.
Posted by fun as a gran at 16:34