I was sent a Ben and Holly's Little Kingdom Magic Mirror wand by Entertainment One to do a review on. This item is from the television series on Nick Jr, cant say as I have seen it but the women at work say their young daughters like the program. 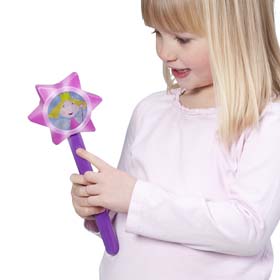 This product is designed to be used from 3 yrs old, and sells for RRP of £15.99. It requires 3 AAA batteries which are included. Ben and Holly's Little Kingdom products are available at all good retailers.


Budding fairies can now practice  their spells with Princess Holly by waving their very own wand with its  magical sounds. The wand replicates Holly’s wand from the programme and when  you wave the wand it makes magical sounds. If  you need Princess Holly’s help to cast spells press the button and she will  appear as a moving picture and she says five different  phrases.


The phrases are said very clearly, easy to understand and I love the way the picture moves on the screen.

They have a brilliant interactive website  here that has a lot of activities for your little ones to join in with, and they are currently running a competition to win a visit from Ben and Holly at your party, plus party goody bags.  .

Or you can go and join their Facebook Page where you can enter competitions and join in with fun activities. Face book tell you

Holly, a young Fairy Princess, is still learning how to fly and her magic doesn’t always go quite according to plan.

Her best friend, Ben the Elf, doesn’t have wings and he doesn’t do magic. But elves are very good at making things – especially toys.

They live in the Little Kingdom – a tiny land where flowers and grass rise above the tallest towers.

Now I am going to give you a chance to win this wand:

For a second entry please tweet "Come join in @pooohbears Ben and Holly competition over athttp://fun-as-a-gran.blogspot.com/2011/11/ben-hollys-magic-mirror-wand.html"

This is a review post, I was given the wand to review but my findings are honest and not influenced by this.

ThePrizeFinder - UK Competitions
Posted by fun as a gran at 19:56

Email ThisBlogThis!Share to TwitterShare to FacebookShare to Pinterest
Labels: Ben and Holly's, competition