It was a very pleasant evening so when OH said he was going fishing along the river I decided I would go with him, and stroll along taking pictures as I did not have one for today. We really do not appreciate fully just what a beautiful part of the country we live in. The river is half a mile away, we have large parks, country estates and the beach all within a three mile radius, but it is just there on our doorstep, and we tend to take it for granted. I tend to walk around pretty much blinkered and none admiring most of the time. Its when you come across fabulously written blog posts like this one here from my friend Kay that you stop and take stock of the world around you.


Normally when we go for a walk we take the dog but she is not up to any more than a hundred yards at the moment due to a combination of her age and the fact she has a spine infection and she is in pain.


So I decided that I would leave her at home and cover more ground and see more interesting things if it was just me and my camera. So we parked up at the river, and hubby decided instead of fishing he would come for a romantic stroll along the river with me. Im not going to attempt to do a Kay and tell you about the bramble bushes, the cows in the field, the rubbish on the riverbanks or the graffiti on the underpass in any great details cos I can't. 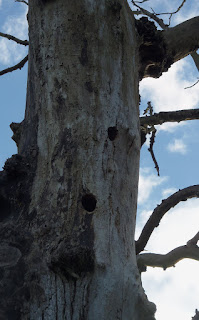 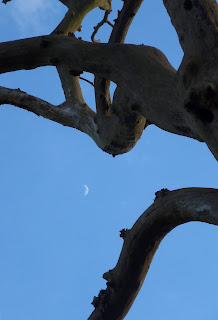 We heard a woodpecker, didnt see him, but I did open my eyes and see some holes he had been making in the tree, and then as I looked around I saw the moon peeking through the branches and it was nicely framed so I took a picture of that as well. 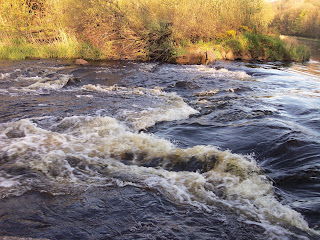 Further up the river, at the waterfall, I saw my first set of ducklings of the year, not a very good picture but this was on full zoom and then cropped. 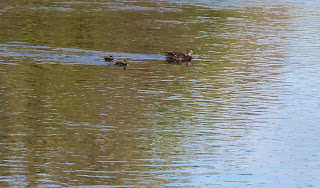 Where we walk along the river is, as the plane flies, less than a mile from the airport, and there was this most annoying plane who I guess was practising taking off and landing at the airport and kept buzzing round over head, and I was fortunate enough to manage to line him up with 2 trees on his final fly round.

We walked on past the waterfall and I couldn't help but notice how blue the river looked, but it really was just due to the reflection of the sky, the water in really life was quite brown due to the rain we had yesterday.

But as my picture of the day I give you a reflective shot. 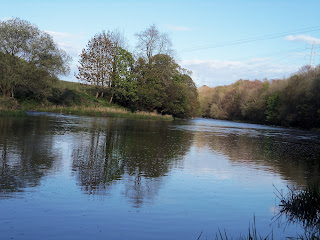