For the last few months Bob has only been attending school three morning a week on the advise of his paediatrician. The school feel he has coped with this fine and so as from this week he is going to try for four mornings and see how he manages. He is hoping soon to be back five mornings a week. as he loves being at school.

So today being a Tuesday he now goes to school, so here he is dressed ready for school this morning. 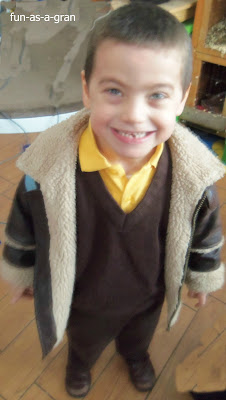 I have picked this as my link picture this week as it is a momentous occasion for a six year old boy who should if he was well enough be at school five full days a week. Here's hoping  that by August  he will be well enough to do just that. (For those of you who don't know Bob had glandular fever in October last year and this has floored him, as it does everybody)

Email ThisBlogThis!Share to TwitterShare to FacebookShare to Pinterest
Labels: 122/366, Project 366