I had seen a Bastille Bonanza advertised locally that was on this afternoon from 1-5pm, I finish work at 2pm, and as it was dry we decided to pop along and have a look.

To say I was disappointed was an understatement. I expected to see lots of photo opportunities with French and Scottish flags flying, people in national costumes, and a lot of other interesting photographic opportunities.

Well didn't see a flag or a national costume, and not much else to appeal at all. Were plenty of children walking round with their faces painted, and a few hooking ducks out of a paddling pool. The cafe was in a stuffy hall that seriously needed vented with some fresh air, and I for one did not fancy sitting in the stuffy heat to have a cuppa and a cake. The busiest bits seemed to be the fire engine that was there for the children to climb on and some owls from Owl Magic were also proving very popular.


Your children could hold these for a fee, but we donated instead just for having been allowed to photograph them. It all helps to support their upkeep.

Thought I would share some of the others with you as well, 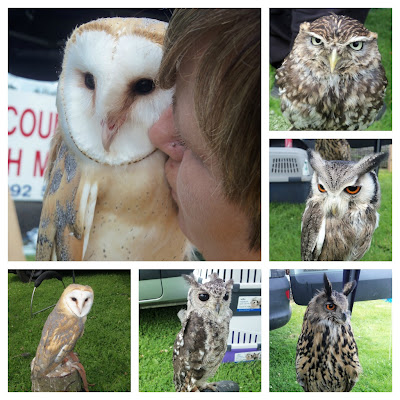