The first night we made on our own arrangements and booked a room at The Castle Hotel in Coldstream. This is the sort of place we normally stay, reasonably priced, clean and with enough room to walk past each other without one having to sit on the bed to allow the other past. It was en-suite, the staff were friendly and the room were far enough away from the pub side of it not to be an issue. It also had a car park which a lot of them in Coldstream did not have. It had wi-fi which I could access from the dining room, and a tv in the room. 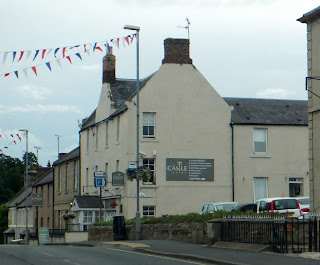 The breakfast was run the standard cereal, yoghurt, fruit juice, tea, herbal tea, coffee, toast, fresh fruit and a cooked breakfast. They did not cater for my food needs, I had contacted them before and asked, but it was not a major issue as I did not go hungry. By choice I would not eat a cooked breakfast but it is nice to have when somebody cooks it for you and brings it to your table.

Liz, the breakfast cook and check out person was friendly, gave us directions to where we were going and gave us local info on points of interest we had seen the night before. Apart from the fact the shower base could have done with a squirt of bleach and a good scrub with a nail brush then I could not fault the place, the room or the service.

Our next stop for the last two nights of the holiday was the much more upmarket Collingwood Arms Hotel a few miles away, just across the border into England, in Cornhill-On-Tweed.

I did worry slightly  about going here, it is not the sort of place we would normally stay, thought it might be snobby,  I was worried as they knew we had won the holiday they might be a bit stand offish. I could not have been more wrong.

When we went in, with the slip of paper saying we were the winners Kevin was on as duty Manager. He gave us a handshake and said well done on the win and welcome. Made it quite plain anything we wanted we just had to ask.
The entrance hall had a stone floor, it also had couches and a log fire that is lit in the colder weather, there is a library off to your right with shelves of books, daily papers in and board games for playing.

We signed in and were shown to our room, We were informed that all the rooms were named after ships at the Battle Of Trafalgar.  Our room was upstairs at the front, overlooking the main road, we had a great view of the church across the road and the surrounding countryside.

I have to say I could not believe the size of the room, must have been as big as the downstairs of my house. A huge big bed that was as wide as it was long. A couch at the end facing the tv, some beautiful pieces of wood furniture. A triple wardrobe was at one end of the room with bedroom slippers and towelling dressing gowns in and a hair dryer to use also. Lots and lots of room to move about. Again the hotel provided wifi for the residents to use.

The bathroom had a double headed shower, sink, bidet, toilet and a roll topped claw footed bath there was a full compliment of bottles of shampoo, shower gel etc. as well as a shower cap and a mending kit. Strangely enough it also had a see through window, you could watch the world go by as you sat next to the window while you pee!! Have to say I was not keen on this personally and we tended to keep the curtains closed while we were using the bathroom, a blind may have been easier.

We chose to eat our meals in the brasserie rather than the formal dining room, they had a different menu and it suited my dietary needs better.

Had to laugh as when we came down for our meal on the first night Kevin asked was everything ok, and I had to tell him no there were two spiders on the bedroom ceiling, my husband could not reach them as the ceiling was too high, so he took the key off of me and went and removed them, thank goodness for that as I had visions of sleeping in the car, they just freak me out totally.


There was a great selection of meals with a full three courses for approx £25 a head, and there food was beautiful. Freshly cooked to order and well presented. I had e-mailed them before I went about my dietary needs and they adapted their menu to suit allowing me to pick a bit of that meal with a bit of this meal, leaving that out and adding this in instead. We never eat more than one course at home. But Kevin informed us that the three courses had been paid for we may as well have it.


The meals also changed slightly I guess depending on what they had received in fresh in a morning, the first night I had the sausage and mash, except I changed it for new potatoes, and mine came with mange-tout and green beans, but on the second night my husband had the sausages and his came with carrots and red onions.

At breakfast time they had brought in natural and flavoured soya yoghurt for me and coconut milk. Breakfast consisted of cereals, fresh fruit, yoghurt, fruit juice, tea, coffee, herbal teas, you could have kippers, and then to round off a full cooked breakfast and toast. Again breakfast for me at home is cereal with fresh fruit and yoghurt on, but I have to say both mornings I also had poached egg on toast as well.

They also print off the fishing reports for all the local fishing beats for the week with a day by day breakdown of the catches  and this was made available to everybody who wanted it.

The staff were marvellous, the girls who served the tables for the evening meals, Leanne and Joanne  worked very hard, were very obliging and nothing was too much trouble for them. If there was anything they were not sure about for me they went and asked.

The whole experience was amazing, from the staff , to the hotel, to the room and the food.  It was nice to see where people with a disposable income stay when on holiday. The other residents were chatty and it had a nice atmosphere about it.

It for us was a chance of a lifetime, we will never be able to afford to go and stay there again, shame really as there was a lot of the area we did not get chance to see.

The only thing I could moan about was an environmental issue not a hotel issue, that  was the church clock across the way, it bongs on the hour every hour day and night. The hotel have provided secondary double glazing in the rooms to the front to cut out the noise, but it was far to warm to close the windows the nights we were there. The locals say they don't notice it, and you probably would get use to it.

Have made up a google+ album with more pictures of the hotel if you want a look.
Posted by fun as a gran at 22:44