The snow we had had on Friday and Saturday had started to thaw a little, just enough to freeze over night and make the pavements and roads an ice rink. We live at the top of a hill so was not much fun making my way to the roads that they have gritted a few miles away.  So I went to get some salt as DH had used the last or ours making a safe pathway to feed the chickens. Every body else locally had obviously had the same idea cos it took me three shops to find this - the last tub of salt in shop three.

Went for a walk along the beach front ( yes yet again) as I just love walking along a beach, peaceful and therapeutic. Was very pretty not a breath of wind to cause a ripple on the water and there was snow on the out lying hills.

But I spotted this when I took a slight diversion off the beach, can not say I have ever noticed it before. The picture in the middle is of the SS Waverley, the last sea going paddle steamer in the world and it sails from the dock here in Ayr. I keep saying I will take a trip on it but have never got round to it.

My baking cupboard is a disaster, everything muddled up and stuff in all the wrong places. Its a silly shape of a cupboard, its a corner cupboard that is much wider at the back than the front and hidey holes round both edges. So I went and bought some tubs to tidy it up. Yes I do have other tubs but you try finding a box and lid that go together.

Today dawned dry bright and wind free, this was good news as we were getting our living room window and both our doors changed over. Luckily it stayed that way but the temperature never rose above freezing all day, so to say the least it was freezing. Have to say the window and doors look very nice, sadly due to what I can only assume was an error on the part of the surveyor we had to end up with the  large fitted cupboard at the side of the back door being taken out to get the new door in as it was a different size than the original. It had to be emptied, unscrewed from the wall and moved. At the moment it is temporarily back but in the wrong place.  This should have been avoided had the surveyor listened to our concerns over this cupboard in the first place and acted accordingly.

The living room window was replaced but due to the thickness of the wood they used the internal gap was made marginally smaller than it had been previously, and now our vertical blind does not fit. At the moment my lovely new window is pinked out with windolene to save us feeling like fish in a large goldfish bowl as people walk by. They have not heard the end of this but decided it best to calm down before I ranted at them.

Normally DD No1 use to come round with the gruesome twosome on a Wednesday evening but now they have a bedtime routine this is not practical. So she brought them round to play for a while this afternoon. Bob was not here till much later as he was away to the other grandparents for the day and likes to stay for his tea. Fifi came up after school, Love how both the twins dote on the older siblings.

Today was the first rain we have had since the snow. But I did not let this put me off and went for a walk regardless. That is why I have waterproof jacket and trousers  Not a lot of pretty scenery along this section of the cycle path, but Greenan Castle was visible with a dull sky behind it.Walked 3.36 miles and actually enjoyed it despite the rain. 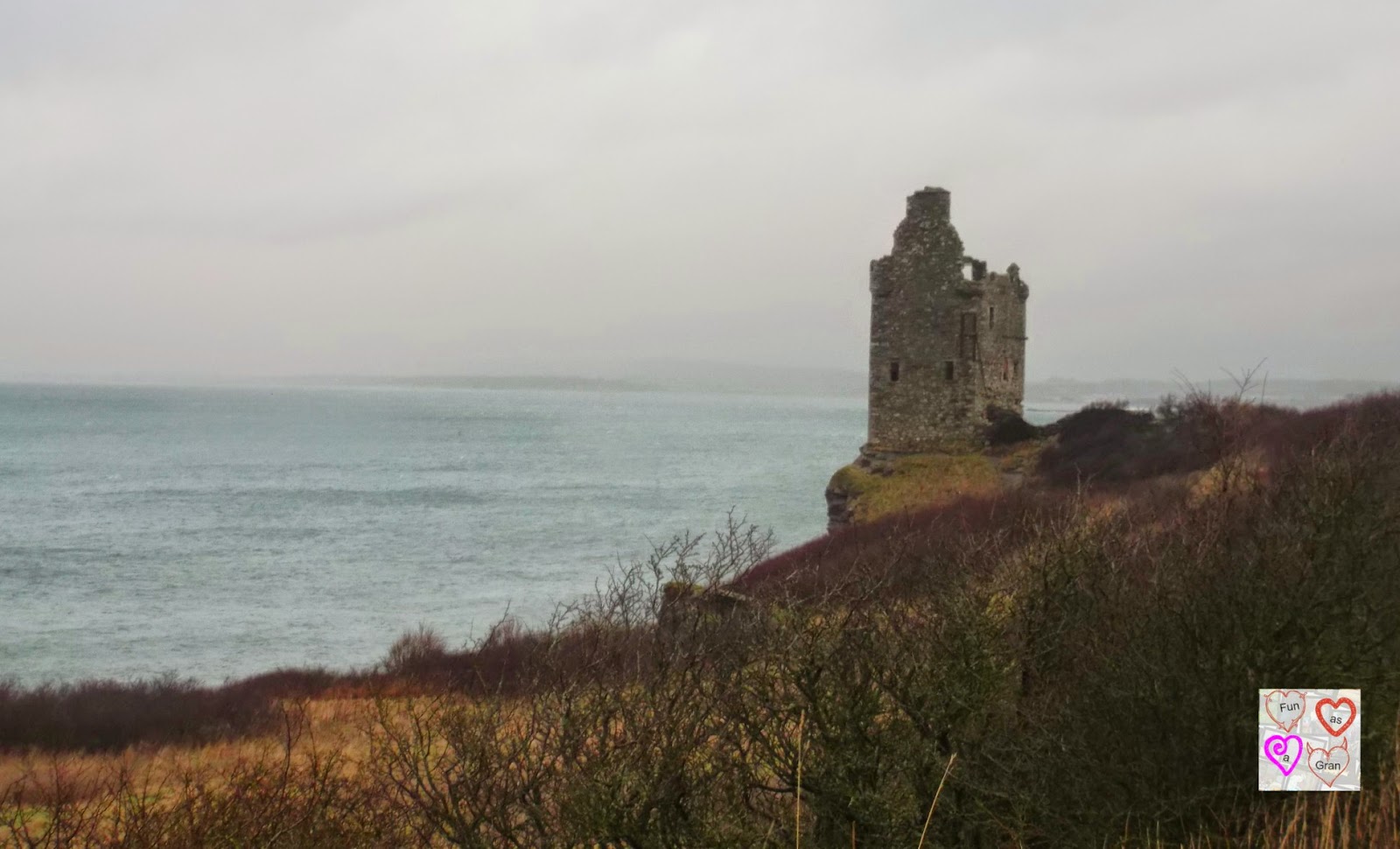 DH had a diabetic check appointment at the surgery the other day so we popped into the town to do a few things while we were there. Love a nosey round a charity shop and spotted these when I was in. Just my size, look unworn but have great big thick treads and a lovely thick padded lining. Just got to wait on some snow now to try them out. 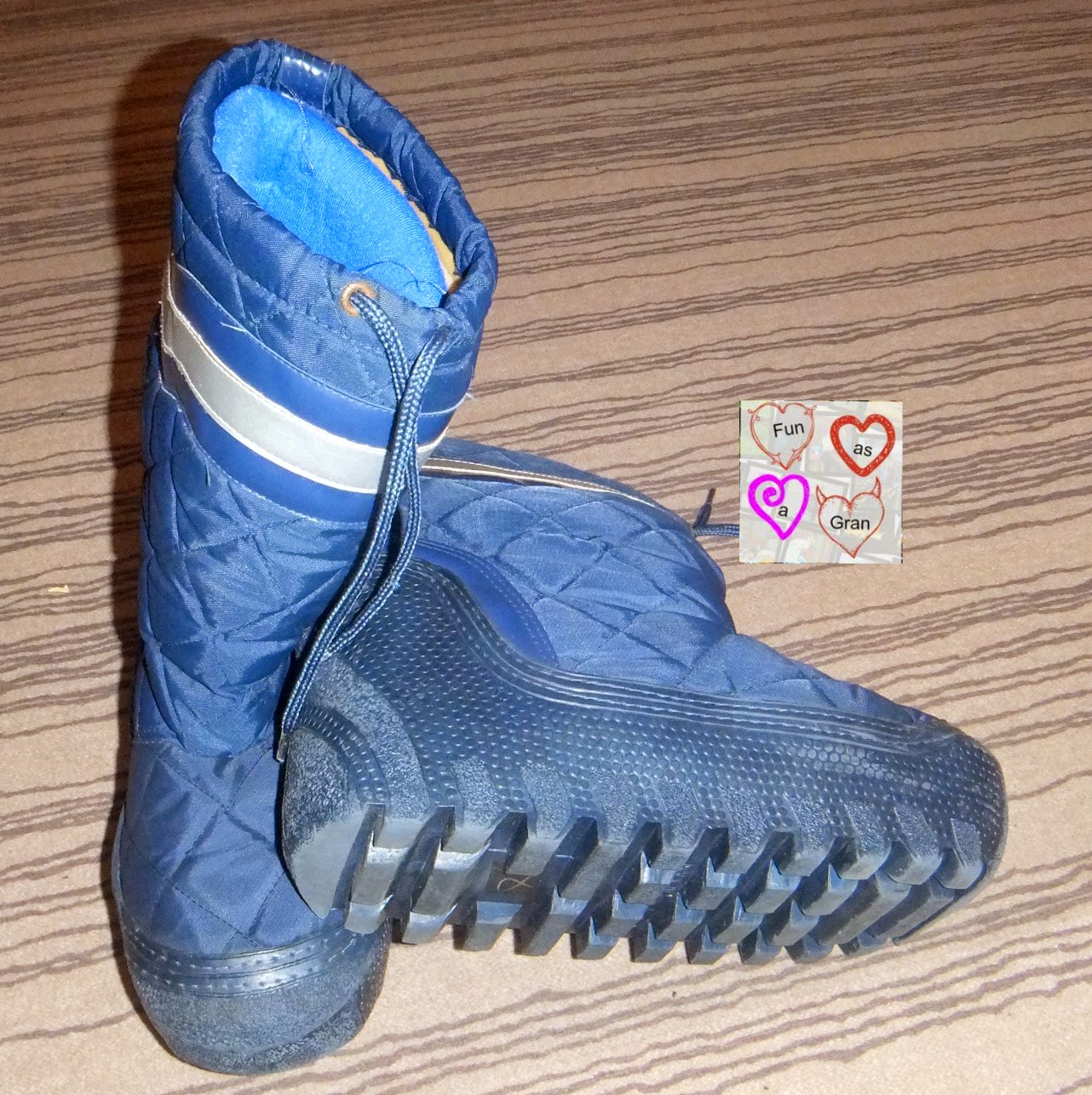