Well D Day or should that be W day is getting nearer. Not long now, the excitement is building and just a few small things left to do. Yesterday we left home to travel up. It is the first really nice day we have had in so long, probably too nice to be honest with you for being stuck in the car without air con. But we took our time in coming up and enjoyed ourselves along the way.

As all my regular readers know I am a keen geocacher and so we decided to add to our total finds on the way up. We were not wanting to stray far from the actual road up, and so I planned a route along the main roads north. The programme I use has a great search facility and so I made use of that and only planned the caches within a mile of our route. We did not stop for all the ones I planned on, some of them we had passed before we could find somewhere safe to stop and the roads up here in the highlands are not the best to walk along safely, or for that matter to just go stopping on, most of them are barely two lorries wide.

So we started off our journey with a run up the easy bit to Balloch predominately motor way, by far the quickest part of our journey. So our first stop was for a cache to see The Maid of the Loch. She is the last paddle steamer built in Britain and sits at Balloch Pier. She is now a historic visitor attraction that you can look round for free, but sadly she is only open at the weekends.

We then moved on to do pick up a few caches along a trail, we cheated with hubby driving and me getting out to get the caches and him moving onto the next. We sat in the shade of the trees and ate a packed lunch before moving on to Loch Lomond. The scenery going north is simply stunning, but again few places to stop and take pictures.

We stopped at Loch Lomond where DH had an ice cream and I had a cold drink. We admired the scenery and picked up a cache before moving on again. 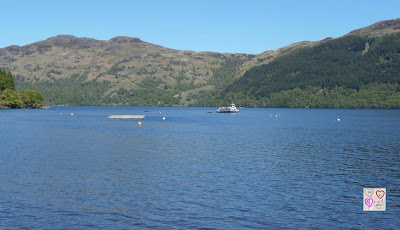 From here we drove on, but had to stop at The Rest And Be Thankful.


REST & BE THANKFUL are the words inscribed on a stone near the junction of the A83 and the B828, placed there by soldiers who built the original military road in 1753. (wiki)

The views were stunning, along an old road, a cycle track and the main road as well as a loch that is there.

Have to say the simple things in nature like the sparkle on the water make for stunning views. 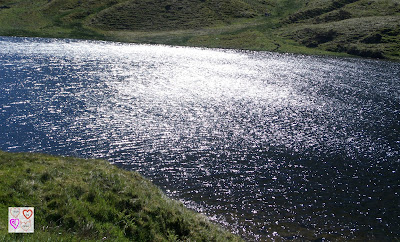 I was hoping to get a cache at Loch Awe as there is one out at the castle, but we ony managed to get this view of it, did not manage to work out exactly how to get to it.

Fraoch Eilean is a small island situated at the northern end of Loch Awe, a freshwater lake in Argyll and Bute, Scotland. It is notable for being the site of a medieval royal castle, now ruined, which was given into the keeping of Clan Macnaghten by Alexander III in 1267 (wiki)


As you head north the scenery and the lochs just continue and just get more beautiful, if that is possible.

So eventually twenty caches and one hundred and forty miles later we arrived at Oban. We arrived in time for a barbecue with other members of the wedding party who had flown up on Tuesday.


While we were eating our food we heard a brass band, apparently the local high school practice in he town square on a Wednesday evening.


We went up to McCaigs Tower  to admire the beautiful evening sun. 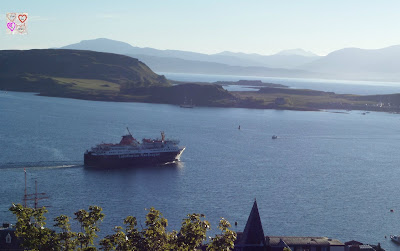 This makes me laugh, if the tide ever gets this high the rest of the UK is in serious trouble. 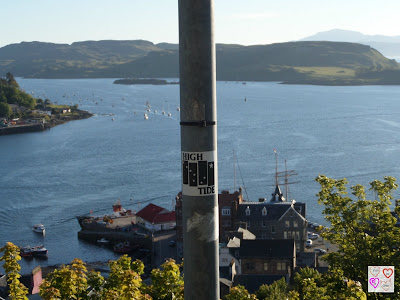 You get a view of the hills across the other side of Oban from inside the tower.


Then of course there was a random flower, just because I could. 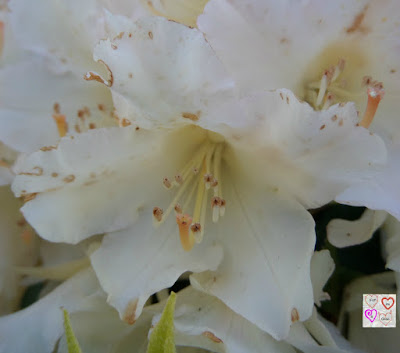 Before we headed north we had to sort out a few issues with the car. It is thirteen years old and was due MOT'd the first week in July. We know it had a number of issues, some of them cosmetic and some of them possibly safety issues. We were not sure if it was going to be economically viable to spend money on it, so we popped it into the garage to let them have a look. The roads that we travelled on are not the best, twisty, narrow and a some points a bit hair raising. DH reckons they should have signs that say straight for two hundred yards rather than bends for half a mile, followed by another that sends double bends for half a mile.
So we really wanted to make sure our car was as safe as possible. One of the issues was our tyres, while they were not down to the legal minimum of 1.6 mm we prefer ours to be no lower than 3mm especially if it is raining on these type of roads.
One of the sites we could have looked to price up tyres and to arrange to have them fitted is Point S. They allow for ease of finding tyres in your area. You simply click your size. and type required, or pop in your registration number, and your postcode and then select your fitting centre that suits you, smooth and easy. Right now if you go to the website and buy two or more Avon tyres you also have the chance to win a brand new car - my dream win right now.

This is a collaborative post but is all my own idea and photographs.