Today Bob turns 10, my second grandchild in double figures. I had an upper respiratory tract infection, and so just popped round quickly to drop off his card before everybody else got there to save the risk of passing it on. Took a pic of him with his cake, I know the candles are not lit but that bit will be saved until everybody else is round. 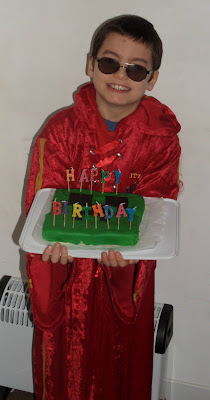 Bob's gymnastics day so hubby and I took him along and then went for a short stroll round Auchincruive Estate.Had no energy for much more. Spotted this run down very old greenhouse with big trees growing right up though it. Must be a number of years since it was used.

A big decision was made today.

Yesterday we made a decision that will change our lives, we decided to take on another dog. I have been moaning at hubby for months now to get out and get some exercise. He has been attending the GP every week for a number of weeks now as his blood pressure is too high, his cholesterol is going up and his blood sugars are off again as well. So we knew if we had a dog he would go out and he would walk. Have been saving money for a number of months now to buy something I want for the house, but decided to blow most of it on a dog. I can start saving again but can't put a price on hubby's health.

Met Lilly, the newest member of the family.

We bought a bed for in the car and a car harness for her as well. We were told she was use to a car and travels well, but when we were bringing her home we get the impression she was use to the parcel shelf, something I will not allow. So safe travelling it is and she did settle down after squeaking for a while. Hubby took her to the beach while I did a bit of overtime.

Had a fright with DD2 who went to the local maternity unit to get Ziggy checked as she had not felt him/her move for  twenty four hours, but all was fine.

Babysat for DD1 while she went shopping. The twins were in bed so I got some one on one time with Bob which was nice.

Spot a recurring theme? Yes Lilly again. This time we took her to a local country estate with a large open field. We let her off her lead for a minute or two and shouted her from me to hubby and both gave her a treat when she came. She was on the lead here but hubby took the lead out with the computer.

Hubby had dug over the tattie patch last week, but we had not had time to plant the tatties. So Lily was going on and digging it up and rolling in the muck. So we planted  the tatties and netted it to stop her getting on it.