Lots and lots of walks this week with Dixie dog.

Well last night did not go well. DD2 brought Ziggy back from the party just after 11. Dixie went nutty and yapped. Ziggy screamed, so dog yapped some more.....then DD2 went back out to the party and her and SIL2 rolled in just after one. Ziggy started crying not long after and cried for ages despite daughter trying to cuddle her in, so dog was doing low growls. So not much sleep was had by any of us. I had an eleven hour shift to do and DD2 and co had to drive all the way to Oban.
While I was at work Ziggy played with the pile of teddies again, just need to teach her to tidy them up when she is finished with them.They object to being left stood on their heads. 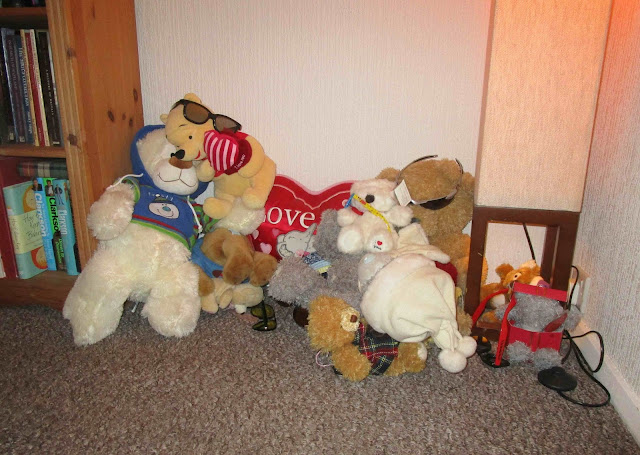 No gymnastics, poor Bob is still so tired and unable to do much but sleep half the day and all night. Not sure what is going on with him but he is not fairing well. Daughter has done an update on him here if you want a read.

A walk with Dixie dog and I really liked the raindrops on the snowdrops. 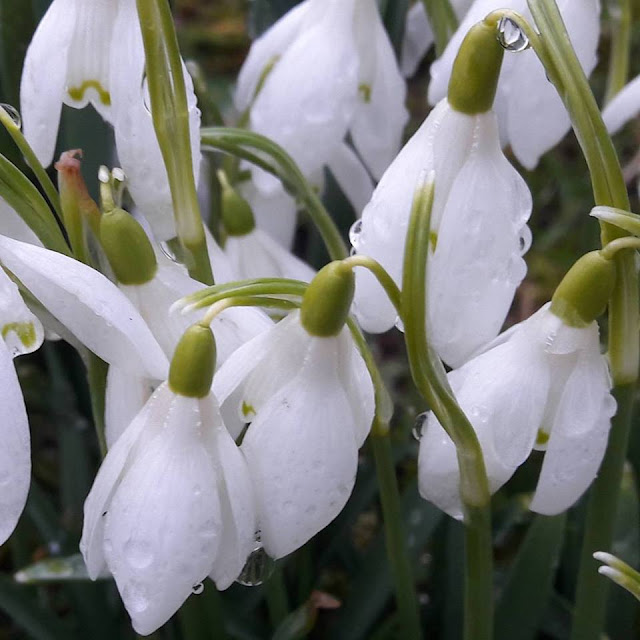 Bob had an appointment in Glasgow. Daughter cannot get her mini bus into the car park at the hospital. But as nobody was available to run her there I said I would watch Spud and the gruesome twosome  to make it easier for her. Hubby was on standby in case I was running late getting back to the village. Spud was in her bed a lot of the time I was there so we could not get out to the park. The twins and I sat and played games and played silly. Fifi took them off to their dancing class, and I got home when SIL came back.

Dixie was down with us and she was there nearly two hours without any problems.

Minky is going through a phase where he will not go anywhere on his own, up stairs for a jumper, the loo, or the utility room for his shoes as he thinks there is a bogey man waiting to get him., Kids imaginations can be a pain at times.

Took the dog out for a walk to Dumfries House.

Dumfries House Set in 2,000 acres, this stunning estate and 18th-Century house with its unrivalled collection of Chippendale furniture has something for everyone.


Nice dry sunny weather and did just over 4 miles and walked some of the paths we had not walked on in the past. The place will be more lovely in a few weeks once all the daffodils and crocuses flower.

Needed to go and do some shopping so paired that up with walking the dog. We did 2 miles round the Kay Park in Kilmarnock.


This much-loved green space has been a favourite with families, dog walkers and visitors for many years and is a prime venue for events and activities.
Works will concentrate on the pond, which will be drained and repairs will be carried out to restore the banks which have eroded over time. Harmful algae will be treated and a wide range of native plants and flowers, which reduce algae formation, will be planted, all enhancing the natural look of the area. The pond will be refilled with water from natural sources and restored to its current level.
A new bird viewing and feeding platform will be built by the old boat jetty and information displays will be put up at various locations to help identify bird species and advise on suitable feeding. New nesting and shelter zones will be created to encourage more bird species to the pond and surrounding areas.


Dinky asked if we could go down as she wanted to feed Dixie dog, or bixie bog as Spud calls her. So we popped in on the way back from a walk round the fishery.  She did actually feed her and stroke her, the other three fed her as well. Very brave of Dinky and Spud as they are both scared of dogs, but knowing Dixie is so small and was scared of them is helping to make them brave.

Wee Dixie tends to feel the cold, not sure if this is just cos she is very short coated, whether it is because she is use to living with a pack of dogs and had others to snuggle to or whether it is because she seems to be on hunger strike but regardless I made her a fleece jumper from a fleece blanket that was added to my collection. It is only for in the house and over night so does not need to look 100%  Can't do much about the first two but working on the third one.

Went for a walk up to Failford where we have our caches to look at them and see if they were all right. One of them was not so disabled it and hope to replace it during the week if it is dry. Did nearly three miles and then popped in to a local pub for a drink. Ended up with hubby having a bowl of soup and I had a plate of chips.

The Failford Inn is a dog friendly pub with doggie bowls inside and out, dog beds in the bar and doggie biscuits in a tub on the bar.

Home in time to go to work for an overtime shift. I had a diet coke as I was doing the driving.