A day out at the Free From Show in Glasgow.

I booked the day off work as I fancied going to see the Free From Show in Glasgow. It advertises itself as


The world’s largest freefrom celebration, where you will find brand new choices for food and drink, plus ground-breaking home products and health solutions. Whether you live with coeliac disease, allergies or intolerances, or simply cut out gluten, wheat, eggs, nuts or dairy (and more!), this event will help you live a better freefrom life.

Thousands of freefrom products, from household names to exciting start-up brands; all looking to show you what they're made of!


We missed it last year as it was cancelled due to snow but had heard so many people rave about it the year before we really wanted to go. The tickets are all free which is a bonus.

As well as the various stalls doing free samples of products to taste there were various information sessions going on in the learning theatre.

We arrived for the start time of 10am but it was already very busy by then. So we started to wander, we had not gone for anything specific but was to hoping to find some new ideas for snacks. We did end up rather muddled up as the rows did not run particularly evenly and we had to double back a couple of times to take in everything. There was also a vegan show on in the same hall so we did have a wander around that as well. The blue side was for the Free From show the green for vegan. 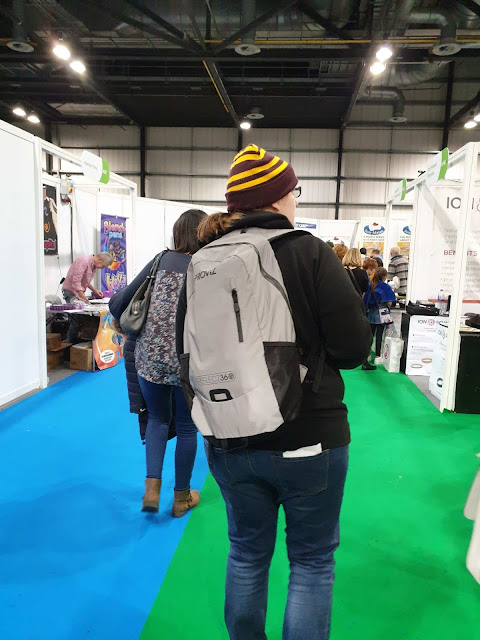 If you are gluten intolerant there were a lot of the big name companies there with samples of their breads, rolls, crumpets, wraps and the like for you to sample, sadly ( for me) all the companies had put dairy free spread on them and I do not like spread I mush prefer to eat mine dry. Have to say the ones that sounded the tastiest I did ask for a piece without spread on and both stalls obliged. These products have come on massively in the last five years not only in their taste and texture but also with the amount of products available, this is my opinion is a good thing - so much more choice and hopefully the items will become more comparable in price to normal gluten products.

We stood for a while at the Doves Farm kitchen area where they had people cooking and baking and explaining the science behind gluten free. This was informative and enjoyable. 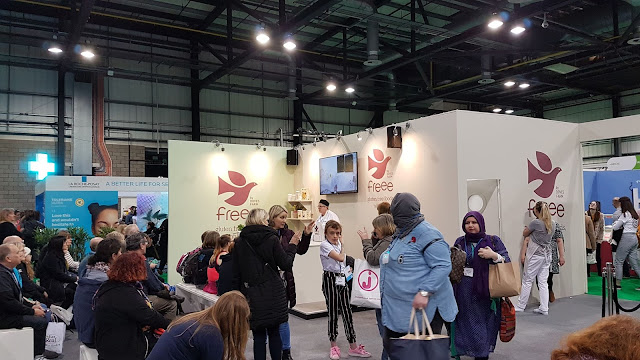 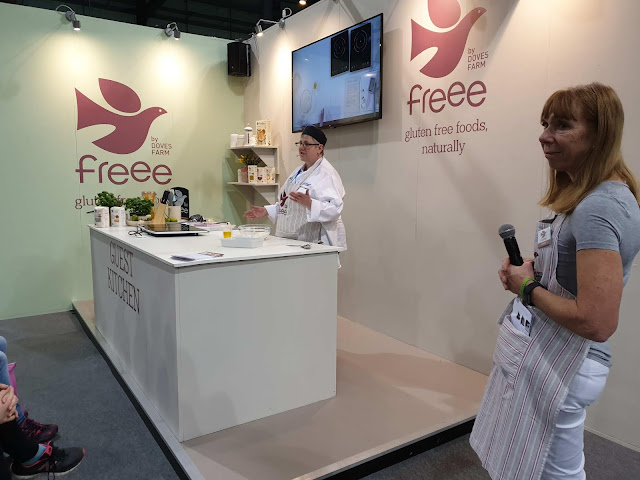 We found a stall selling Koko products and you could sample their yoghurts and the different milks. Auntie H spotted a flavour we have not seen before, raspberry ones, and they were selling them cheaper than the shops do and putting them into a free insulated bag. So five packs were bought to take home to Bob. I sampled this flavour and found them to be very fruity with a nice aftertaste as well. I personally do not eat fruit yoghurts due to my issues with fruit but was nice to have a small taste. They were smooth yoghurts so the fruit was well pureed down, the ingredients list 10% raspberries. 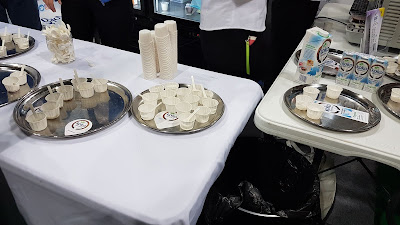 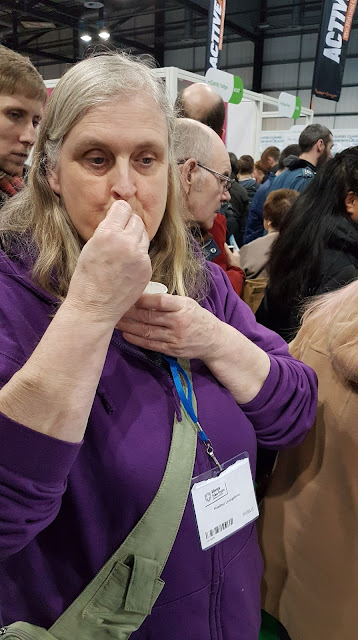 We also visited the La Roche-Posay stand for some free samples of various creams. I am always so reluctant to buy new products like these as even hyper-allergenic products have been known to cause me massive issues. These were also doing a talk in the learning zone at 3pm but we left just after that so did not go. 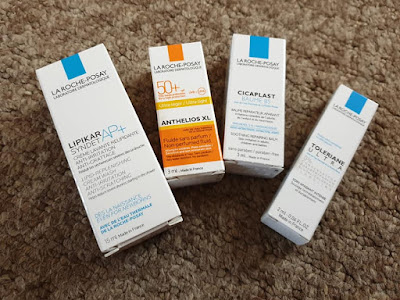 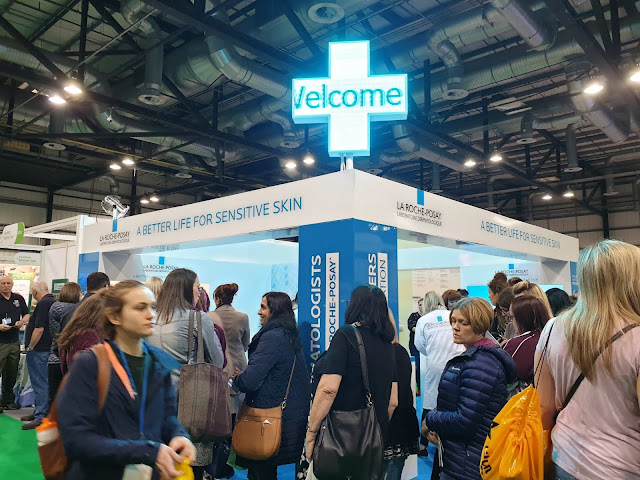 We went at stood at the back of the Learning Theatre for the 2 pm talk,(the seats were all full)  "Considerations for Food allergy Management in children and young people" . Auntie H took notes on this and spoke to the lecturer afterwards who said it was ok to write a blog post as long as we did not use pictures of the slides, so that will be written up shortly. 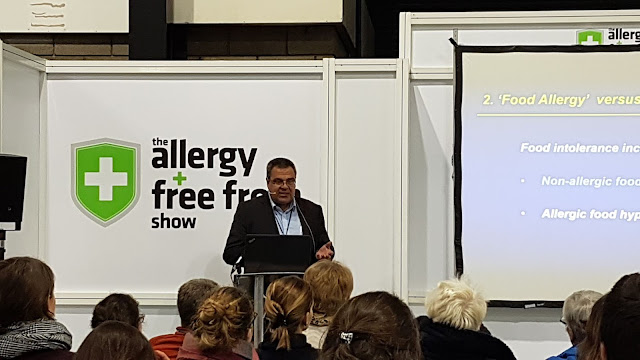 We did mange to find a few new snacks, the Real Foods were there with some of their range, a few I had not seen before - Cheezie straws or the Quinoa white cheddar puffs but both had an after taste I did not like. We went looking for their veggie straws as I think they are amazing and Auntie H wanted to try them but they did not have any of these. The price they were selling them for at the show was more expensive than they sell for in the shops so we did not buy any. 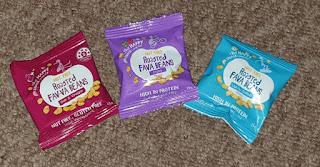 Next up we found roasted fava beans and roasted chickpeas by the Happy Snack Company. Again we have never seen these and they were free from all Bob's allergens so Auntie H bought him a box of each of the flavours, salt and vinegar, pizza and ready salted. There are six small packs in each box and she paid £5 for the three boxes, they are £2.50 a box in the shops so that was a good buy. I asked for one bag of each to try to do a blog review on so that will come later. 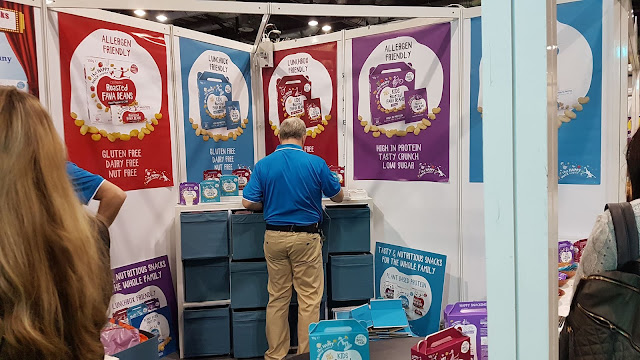 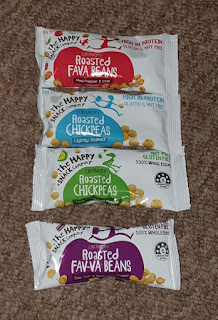 I also spotted somebody selling a Smart Peakflow meter. You connect it through the audio jack point on your smart phone and it takes and logs your peak flow. I felt this would be a good idea, as my regular readers will know I had a problem a few weeks back when mine bottomed out and I ended up with an emergency appointment to get oral steroids. When I get a cold i tend to monitor mine and double my inhaled steroids but I really should take and record my peak flow twice a day every day to try and pick up sooner on any potential drops. So the agent was nice enough to let me have one in return for a blog post, this will follow in a few weeks when I have been using it regularly. 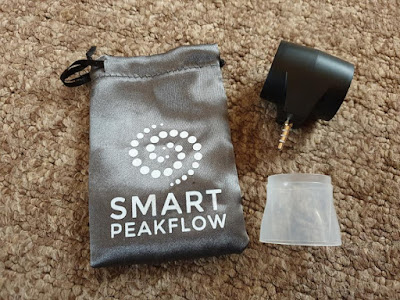 We found a couple of support groups aimed at children, an eczema one called Eczema Outreach

Eczema Outreach Support offer support services for families of children affected by eczema in the UK.


The best find of the day though has to be CYANS - Children and young people's allergy network Scotland - despite our family history none of us have ever heard of them. So we picked up some of their leaflets for Bob and DD1, The Children and Young’s People Allergy Network Scotland – CYANS – was established in 2011 to locally improve allergy care for all children across the country, and develop a dedicated service for young people to encourage an easy transition to adult services.
In order to reach these goals, CYANS works through a partnership of patients from 0 to 19 years, their families and friends, health care professionals and the voluntary sector.

The biggest disappointment with the show was both DD3 and I both bought a Nova Multi whisk. The salesman showed us using skimmed milk how to whisk it into peaks like whipped cream. He assured us it would work in the same with any of the dairy free milks, well take it from us it doesn't.

Reviews on the products will appear in the near future.
Posted by fun as a gran at 21:59