Making what I hope will become a family heirloom #Wotw

Linking this up to Word of the week #Wotw - Heirloom


The latest grandchild was born in January. So for months before she was born I started work on a project that I am hoping will be loved and treasured for many years to come. It was made with love and every stitch made the bigger picture of what is the finished project.

The whole thing was put together only after a lot of thought went into it. What blanket to choose? What verse do I add? Which squares do I want pictures in? What pictures do I want to use? Does less really add up to more or does less look unfinished?

I have to say it would be an awful lot easier to walk into a shop and buy a generic blanket/outfit/ornament/toy for the new baby but I always believe that hand made is so much nicer.

There are others in my son in laws family who knit and crochet more beautifully than I do so I am keeping with my tradition of making a unique one of a kind piece of work that nobody else could replicate.

So having chosen the baby afghan, I begin by making the edges into tassels. Pulling out just enough strands on the warp and weft to make good size tassels with. I then spent hours trawling Pinterest for pictures that I liked that I thought were suitable but not overly babyish as I am hoping these blankets will be loved by the grandchildren into their teens,. Fifi at sixteen still has hers on her bed and likes to snuggle into it when not feeling well. Hers has a blood stain on from when she damaged her two front teeth at two years old and it went to hospital with her when she had an operation to have them removed as they were not repairable. You can look at the making of this one here.

Once the pictures are decided on I then spend time pondering what colours of threads to use and where about to place them on the blanket. I did not want to make it too similar to the one I had made for Ziggy, which you can see here. Funnily enough Ziggy loves twinkle twinkle little star, very apt with the verse that was placed on hers. I decide for this blanket to put the pictures across the diagonal. Again we did not know if this baby was a boy or a girl so the pictures reflect that as well.

Some of the pictures were chosen to tie in others were just because I liked them. 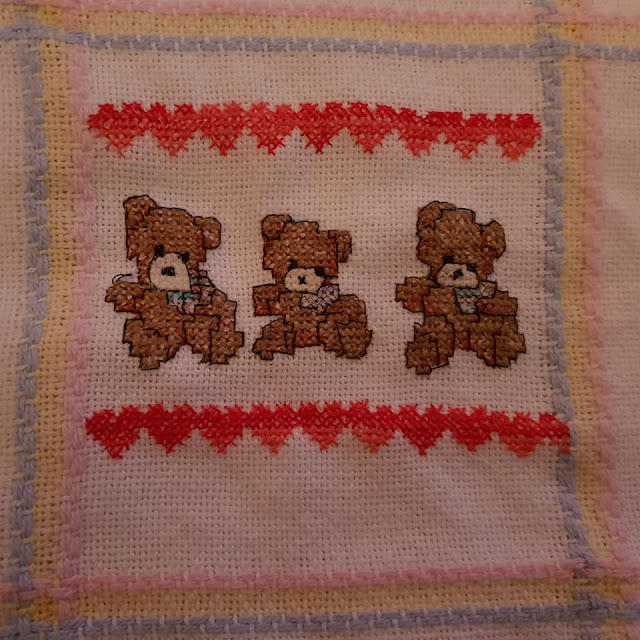 I just liked these bears, I added the hearts to save them looking lost on the squares. 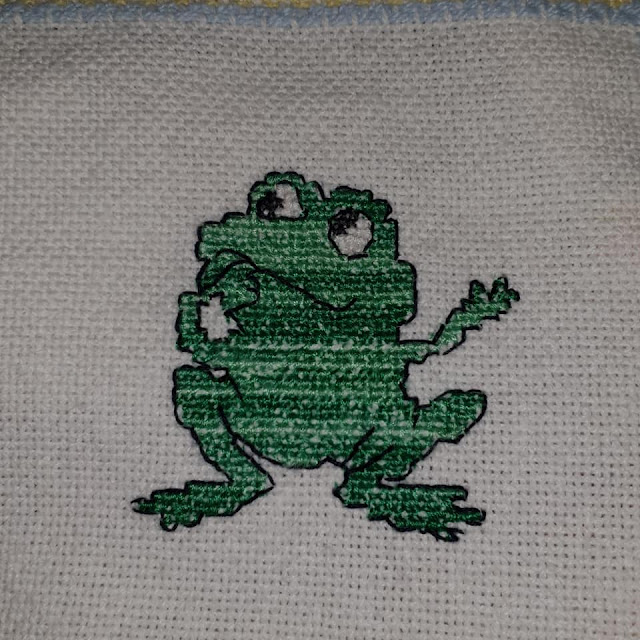 The frog ties in with SIL, his Auntie Mary has given him something frog related every birthday since he was a young boy.This ties in nicely with a family tradition 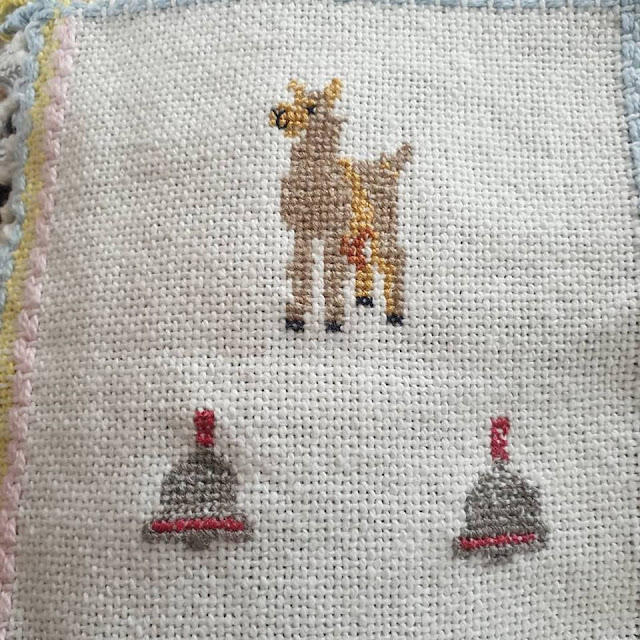 This will make you laugh. Ziggy gets called Drama LLama ding dong, so we have a drama llama and two bells for ding dong, it balanced better than one bell. 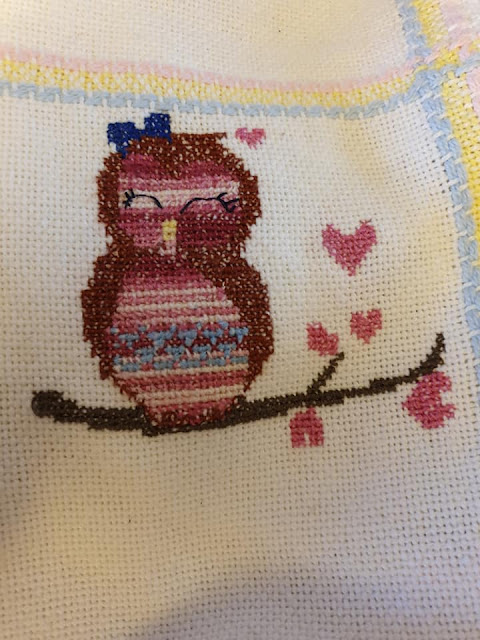 An owl because Ziggy loves owls. I toyed with a few different owls but could not make up my mind so I did a Facebook poll and asked people to choose, and this one came out the winner. In hindsight it should have been lower down the square. 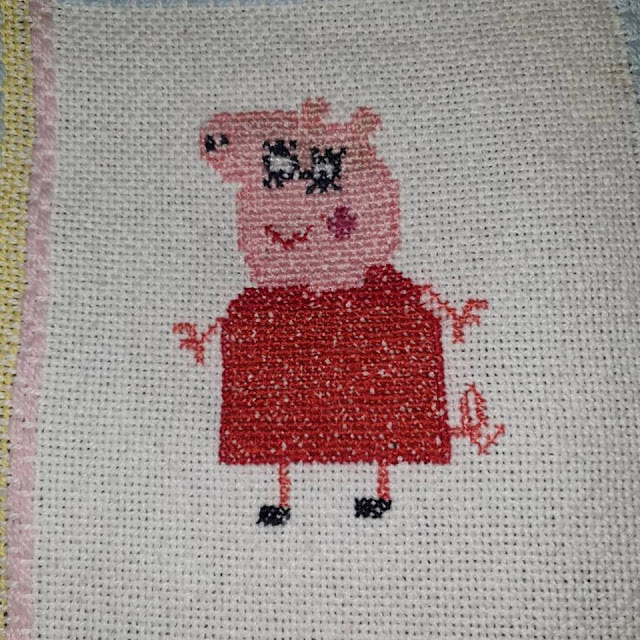 Again Roo has her big sister to blame for this one, Ziggy loves her Peppa Pig so Mrs Peppa it is. Love the curly tail and her eyelashes. 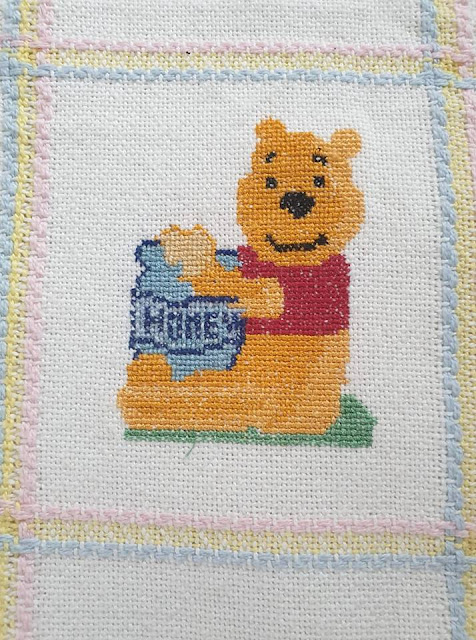 This one is because I like Pooh Bear, I know DD2 does not but this adds part of me to the blanket. 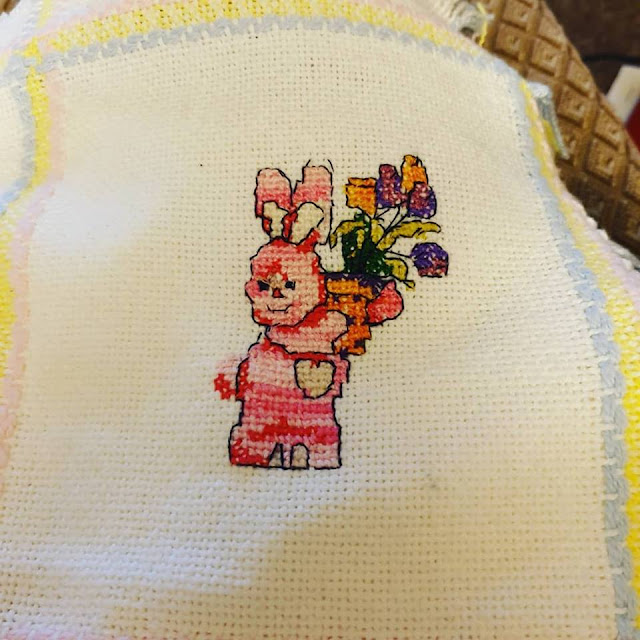 The pink rabbit ties in with DD2's pink rabbit we got her for her second Christmas and has been loved and loved. Cost a small fortune at the time but that was all she got as we had enough toys in the house. She still has this rabbit and it still plays Brahms Lullaby when you pull the string. This pink rabbit sits on a chair in Ziggy's room. 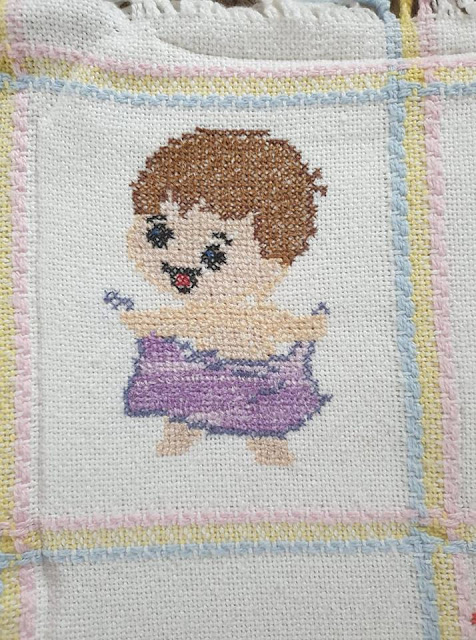 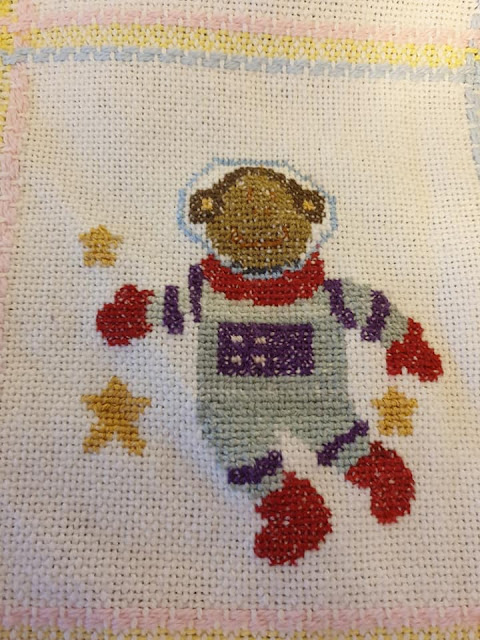 This one again just appealed. This had the face unpicked and restitched as it kept going wrong. It does have features but they don't show to well in the photos.


So having finished with pictures I then added her details.

and finally after thinking long and hard and scouring the internet for a verse I liked, I decided to go with this quote from Pooh Bear. Re stitched this more than once as the spacing is off but this was the best I could get it across the coloured borders on the squares. I regretted at this stage buying this type of baby afghan but the rest looks amazing so maybe I should not be so picky.

At this point I debated adding pictures to the two outside middle squares but I think that would have spoiled it. 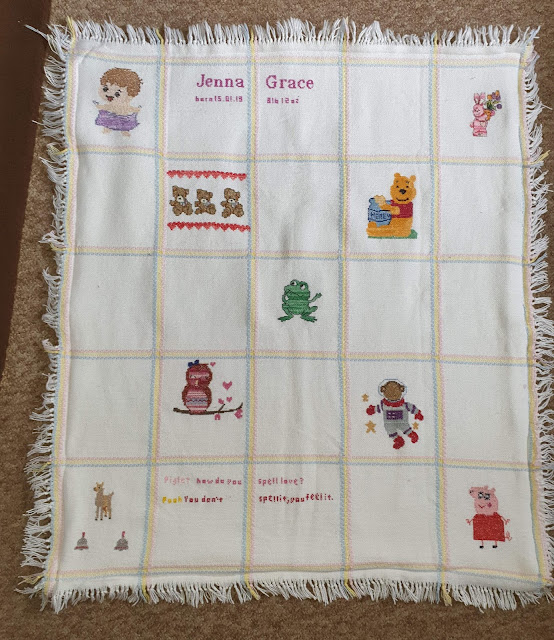 Lastly to finish it off I added a white fleece blanket onto the back to give it a bit of weight and cover the back of the threads. 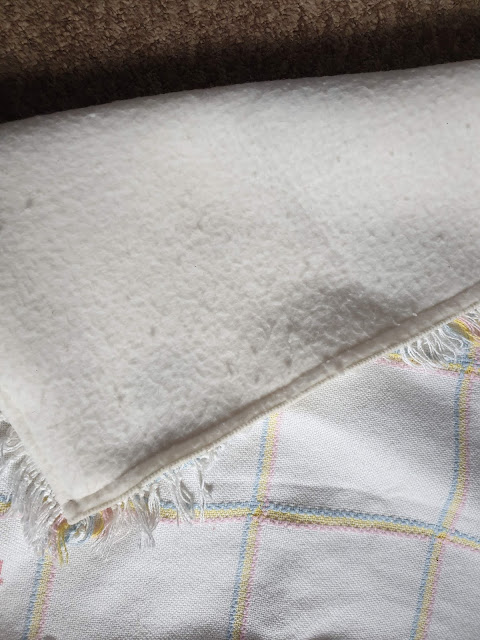 I am very pleased with the finished item and hope it will be cherished for many years to come. 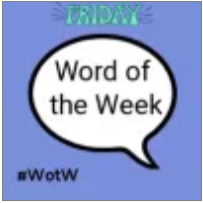