I had husband bring down a box out the loft as I was looking for my BA certificate in case I need it if and when I start serious job hunting.

Lots of other items in the box, and so I will share them with you, might not be in total date order but hope you like them as much as I did when looking through them all again.

Some of them date back to my school days. back in the time I use to love swimming, netball, athletics and such like 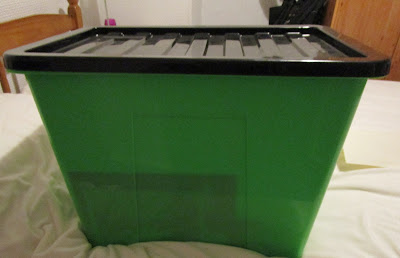 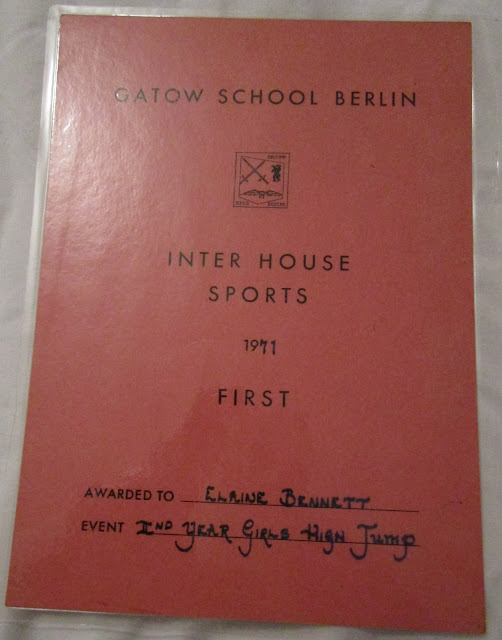 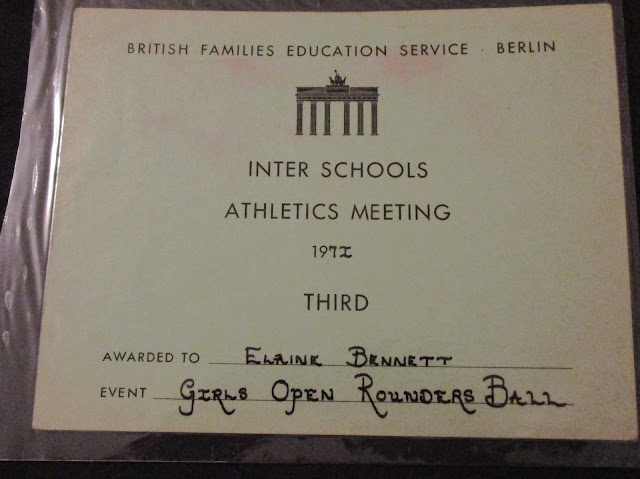 We use to spend hours in the swimming pool, it was free and was a great way to pass the holidays. Diving off 5 a meter board was a skill I learnt at 10 yrs old - no fear at that age. Use to get a lot of the young squadies in the pool, a lot of them this was their  first posting and they were home sick, but back in the days fun was innocent we would spend a lot of time with them throwing us around and swimming races etc. 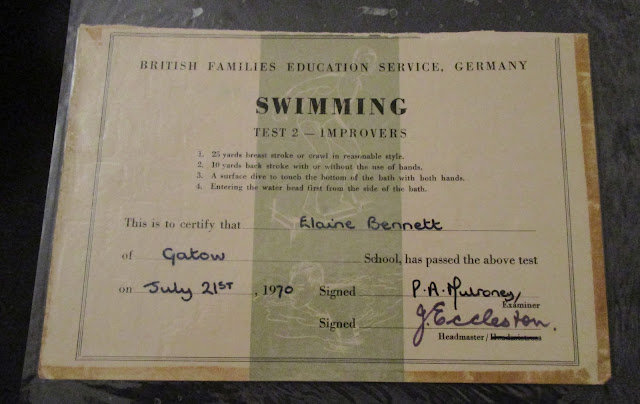 I still have DD1's weight card 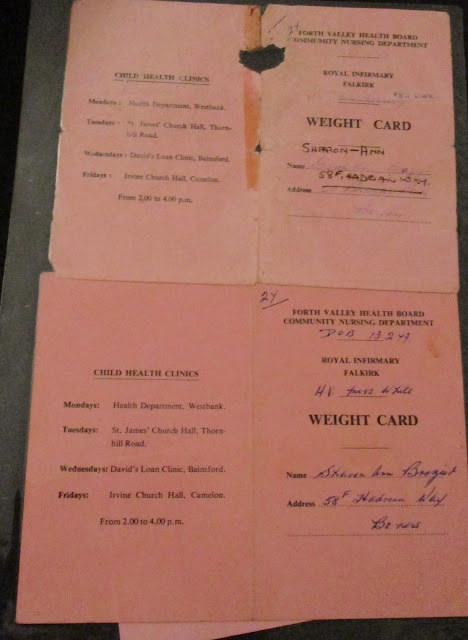 DD2's Primary 1 report card. She had a "group" all to herself as she would not read in front of the other children as she was left handed and read and wrote backwards at this time. 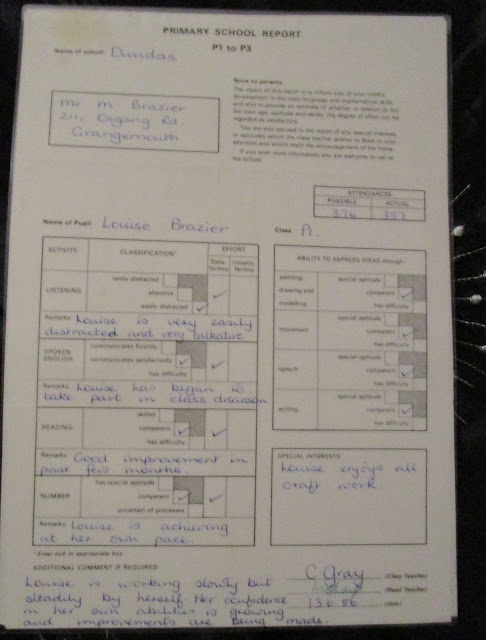 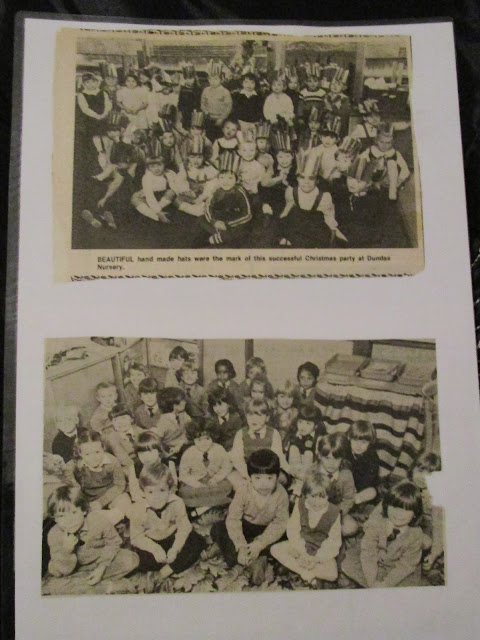 DD2 when she won a bike through a school competition, she is front left at a ceremony they did for all the winners. 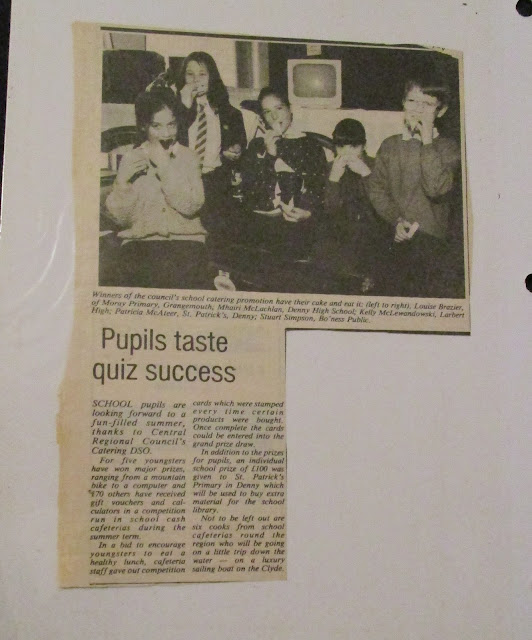 When we lived in Grangemouth my three children and I spent a lot of time at a community project, the area we lived in was a designated area of deprivation, that offered all sorts of fun.
Had two paid workers the rest of us were volunteers. I started in there as a creche worker, saved them vetting any one as I was a registered child minder at the time. This gave the parents time to do the classes that were on three afternoons a week.

Mine all had no choice but to do the school holiday clubs as I volunteered for this as well. Sometimes we would have 150 kids some sessions and they did arts and crafts, dancing with a show at the end of the holidays, lots of outdoor activities as well from hill walking, abseiling, gorge walking, canoeing etc. Handy thing was the volunteers got fed their lunch free and so did our kids, great money saving when hard up.

Tony O'Donnell, was a comic illustrator and drew Ghostbusters back in the day use to run art work shops with the children, Did some fab caricatures of the volunteers children, not sure what happened to ours. 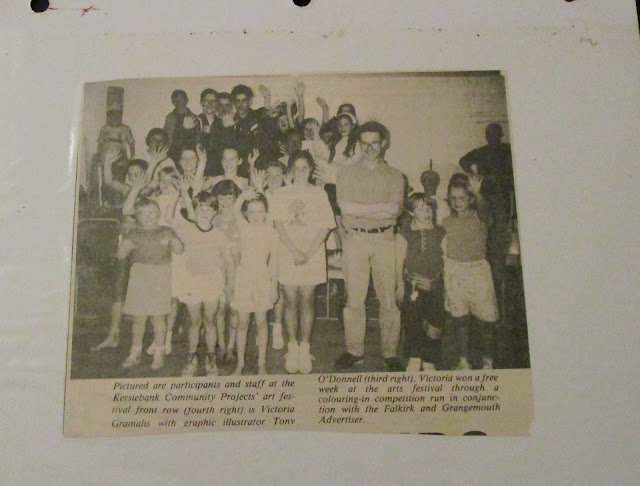 The community policeman did a lot with and for the children (top) and we organised ladies self defence run by two qualified trainers. 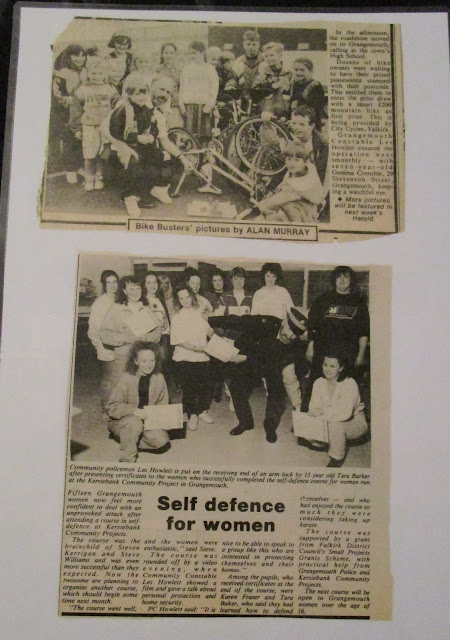 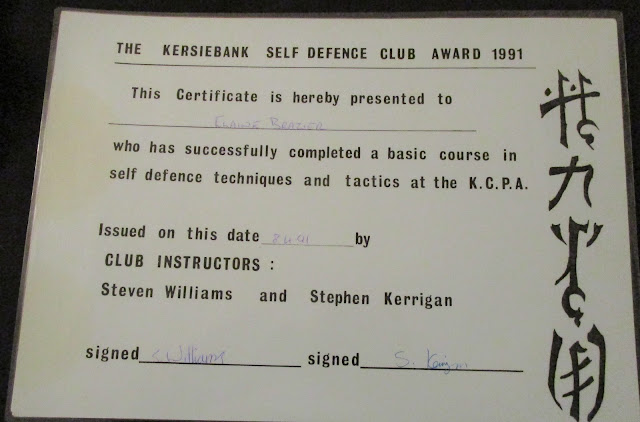 A different year with music workshops in the recording studio and another master class of comic drawing. 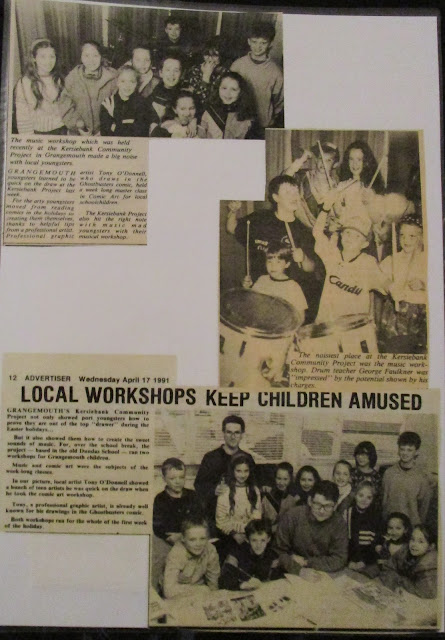 When we moved away from Grangemouth I got a reminder, an engraved clock, which I still have 26 yrs later,  as well as a party. 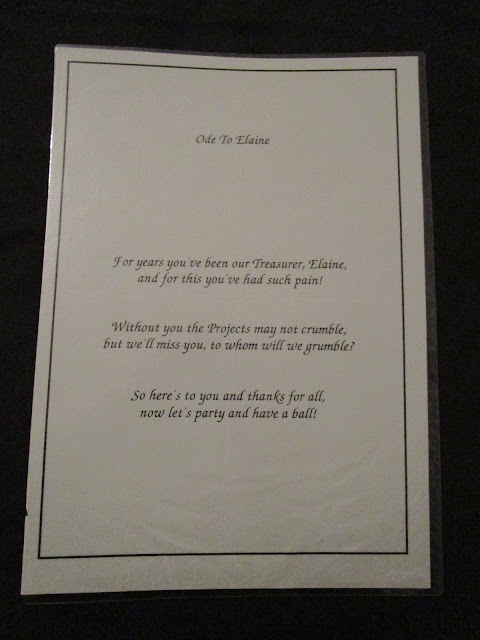 I did a bungee jump one year with good sponsorship from the parents and children that used the project. Not sure about the "sound mind" bit. 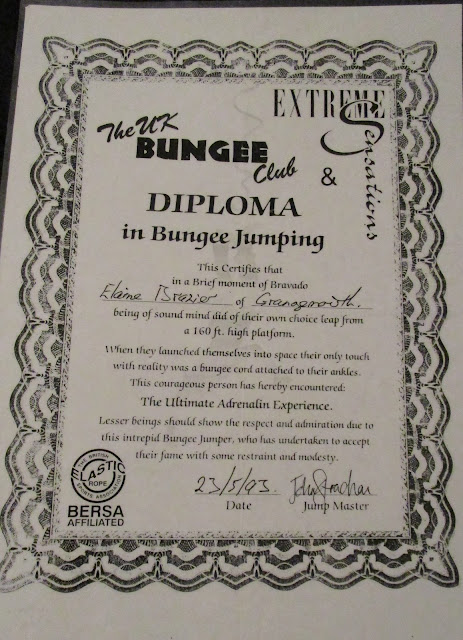 Also had a run in with the housing association after my daughter had an accident. 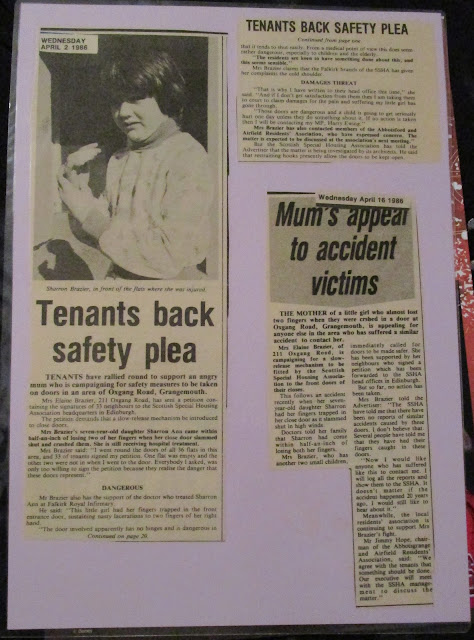 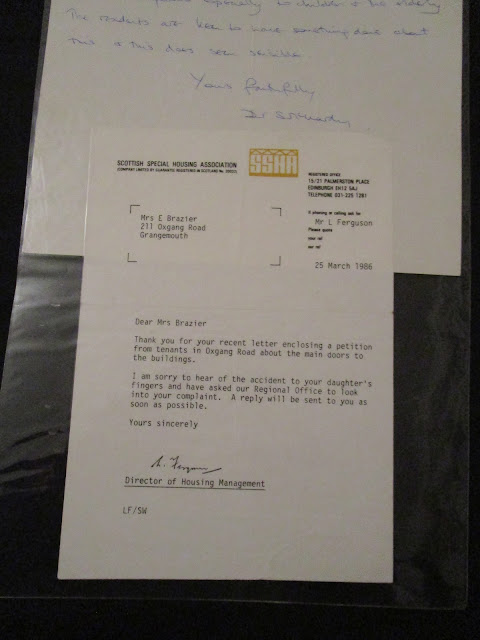 Not to mention a campaign that we kept up for a number of years, both before and after my son ( DS2) was knocked down by a car. 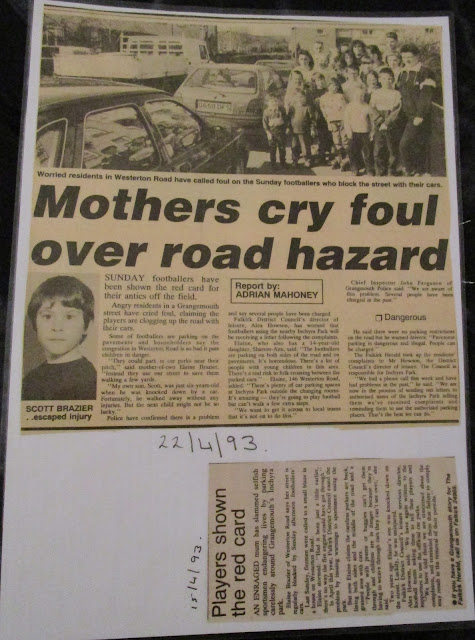 I was awarded this certificate from the other daft volunteers as a laugh. We won in the end!! 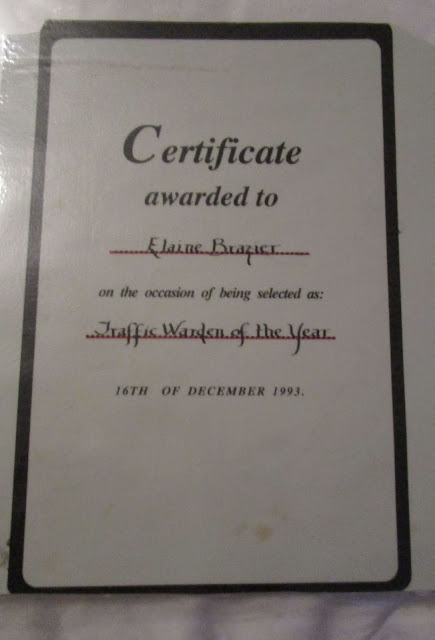 This was made into a calendar when DS2 was in playgroup. 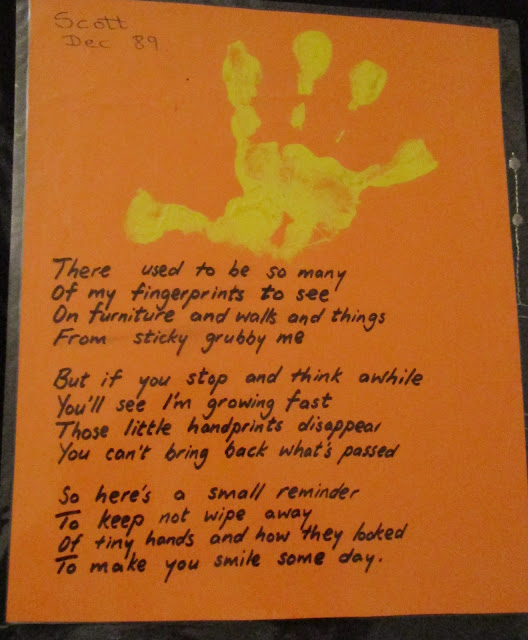 Here she is when on P2 representing her class (2nd from left)  when a minibus was presented to the school by BP Chemicals, they were just across a field from the school playground. They donated a lot to local charities at the time. I also remember them gifting a lot of computers to the project when they bought new ones for the offices, and paying for night classes for anybody who wanted to learn how to use one. 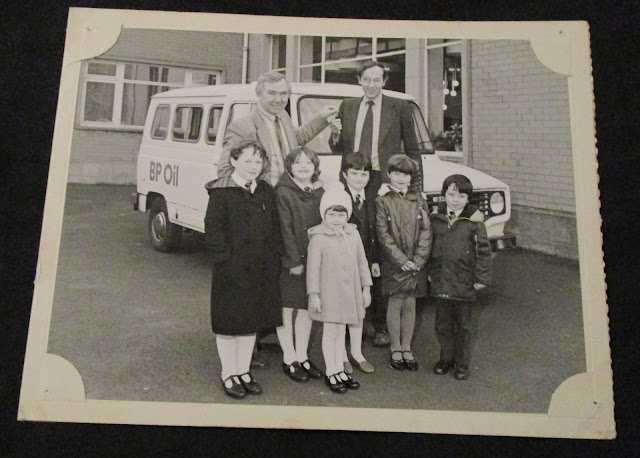 One of the things DD1 excelled in, like me, was maths and represented the school on more than one occasion. 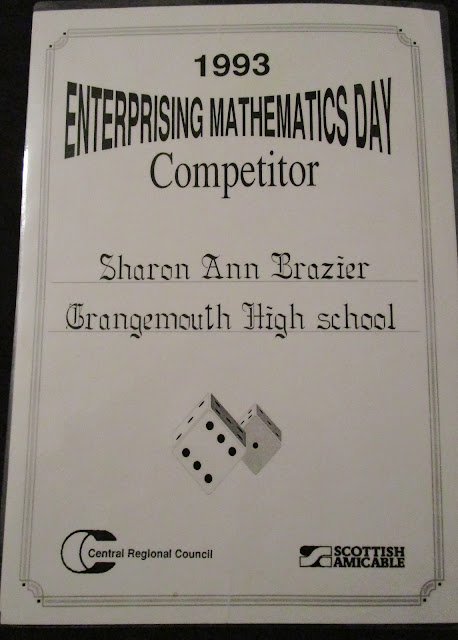 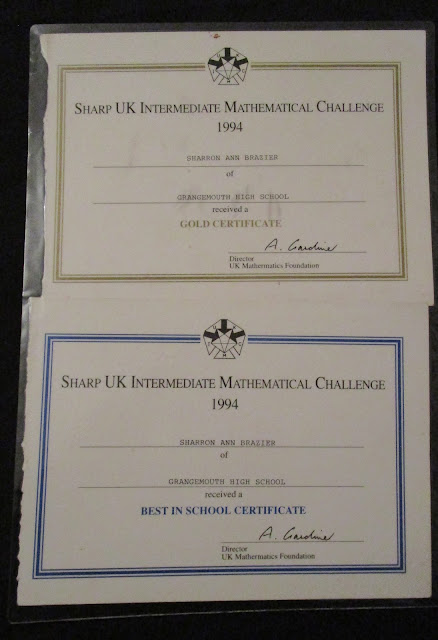 This is one of the things that brings a smile to my face. DD2 spent years being trailed to the Glasgow Dental school,  one bus into town, walk to the train station, on a train to Glasgow and approx a mile walk to the school. Even at 16 she would not go by herself. Then she left school and was not old enough to go to Uni so she decided to do some voluntary work  until she was. So the horror who would not go to Glasgow and back by herself but jumped on a train and made her own way to
Worcestershire for an interview and then moved down there to work. She had a great time. 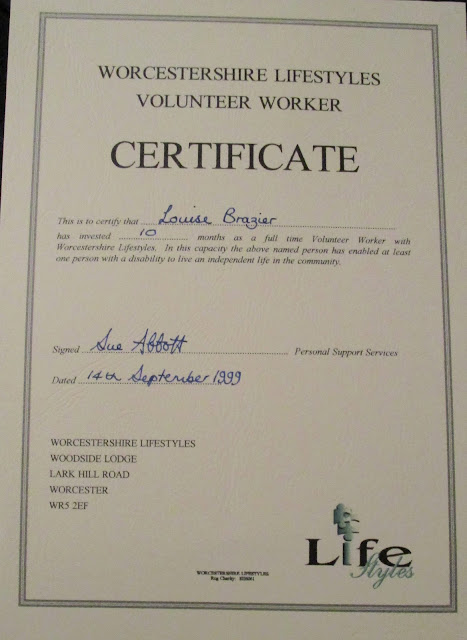 She also enjoyed playing the recorder. 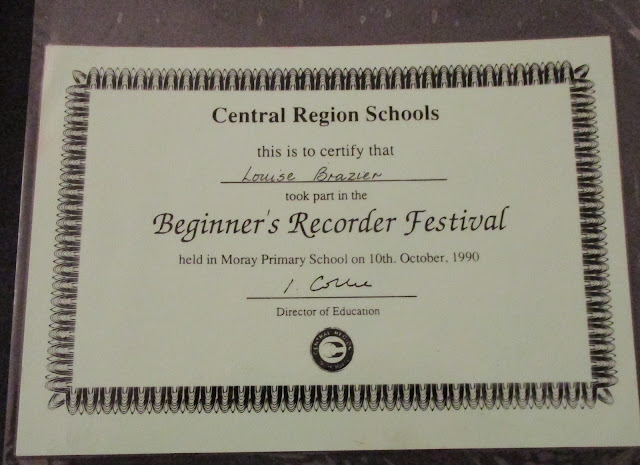 Both of the boys wrote about their dad. 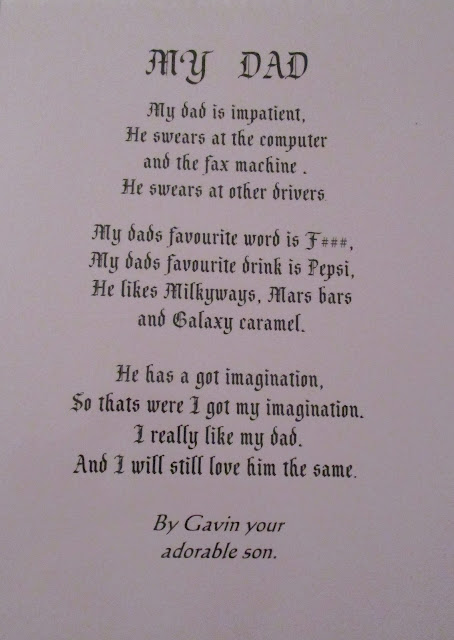 and DS2 did a news item on his dad 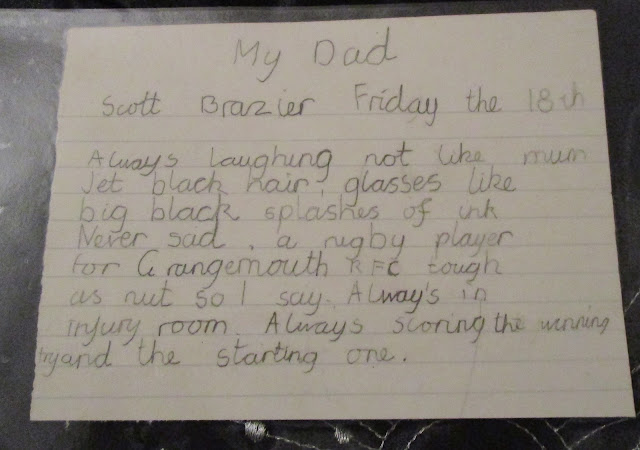 This is DD3 with the rest of the children from her school who entered for a Rabbie Burns poetry competition, where they stood up on stage one by one in front of a massive audience of parents and recited a poem.  Each child from every school of the same age read the same poem. 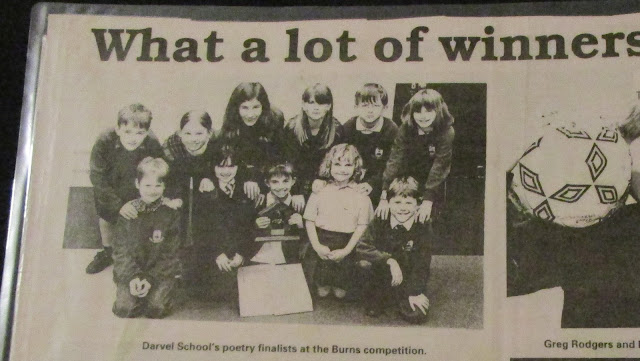 I don't remember this but not bad for a nine year old on a beach. 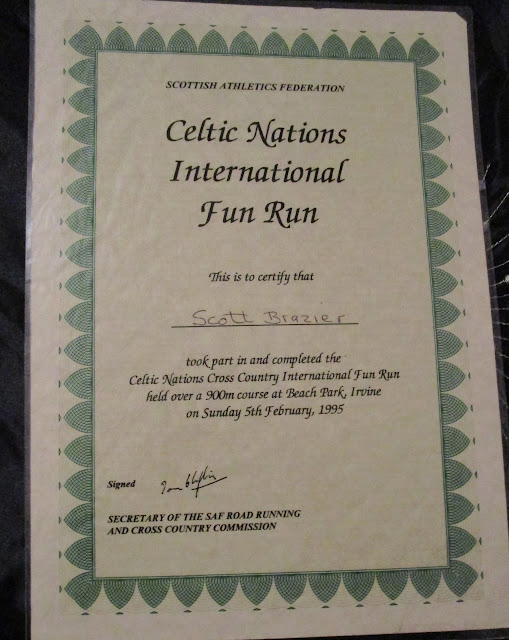 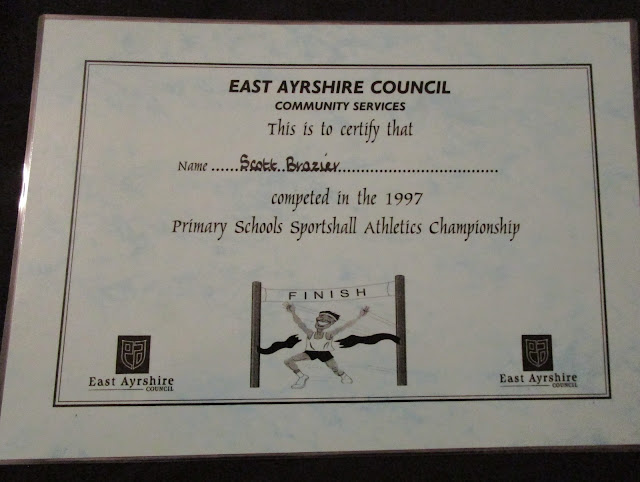 I am sure there are many more memories in the loft, but was fun looking through this lot.

I am aware there are personal details on some of these, but the girls have changed their names. we no longer live at any of the addresses and neither of the organisations exist any more.