Dulux Bedroom in a box - a review

We were offered the chance to get sent out a bedroom in a box by Dulux. We decided this would be great for Bob's room at home. The room was last decorated before my daughter moved in there nearly five years ago. So it was time for a makeover. We also wanted to get Bobs Playmobil and Lego up the stairs now Minky is mobile in the living room, so this was a great opportunity.

Dulux have teamed up with Walltastic to bring you the Bedroom-in-a-box. Containing an exciting colourful mural (and adhesive) and perfectly coordinating Dulux paints, it's the easy way to create the bedroom your child's always dreamed of.

So our starting point was preparing the room. I got Bob involved in helping me tidy his room and  pull off the stickers he currently has on his wall as well as take down his posters and such like. They left marks on the wall and peeled off some of the paint that was under them.

We knew Bob and Fifi were going to Oban to have a week of fun staying with Auntie T, so when they went of Sunday we cleared Bob's room into Fifi's, ready for the serious work to start. Now as Bob's room is 16 ft by 11 ft we knew one tin of paint would not be enough so my daughter went and bought another tin of the willow colour for the walls.

The first stage was rubbing down and filling, Granddad and Grandpa Tom set to work. Grandpa Tom was happier doing the work from the ground so Granddad started by doing the edges. Then they painted the blue wall. As you can see this was quite a dark blue that was needing covered. The paint was easy to apply a great consistency and covered really well. The paint was fume free which made using it very pleasant. It dried remarkably quickly. The wall was given a second coat of paint as you could still see where a few of the stickers had been, but the rest of the blue had covered in the one coat. The edges were done with the perfect finish brushes that were provided. These made painting along the top and bottom much easier as due to their design there was no need to mask the ceiling or skirting boards to get  right to the edge, well impressed with them.


Bob's cabin bed was moved across to this wall once the paint was dry, and the two end walls which were white were then painted and these also covered easily with the one coat.

OH and I were responsible for putting up the mural so the next day we made a start. The mural comes in twelve sections, six along the top and the other six along the bottom. The wall in Bobs room that it was going on to was nearly sixteen feet, so three feet at each end of the wall was painted in a coordinating colour ready for the mural to go up.

We followed the instructions that came with the mural, you have the option of double sided tape  or wallpaper paste. The paste is supplied, and we decided that that was our preferred method. As the mural needed lining up at least with the paste on you have room to side it and line it up, we were not sure we could get it spot on first time if we used tape.  The mural is put up starting from the top left hand side piece, working cross and the the bottom from left to right as well.  It tells you that you have a six mm overlap as this allows for shrinkage. Each piece is marked with small squares in the corners and a few small lines running down the length of the pictures as a guide to lining up. The instructions say to expect  two to three hours to get the mural up. We got the top done in just over an hour, and carried straight on with the bottom, this took slightly longer to line up as it needed to be lined up in two different directions, so their two to three hours was spot on.

The finished effect is amazing, its big, bright, colourful and has a real "wow factor" as you walk in the room. It has a real fee about it with the 3D effect it creates, you feel you could walk into this and play in the waterfall.


Bob absolutely LOVES IT, he is spending his days in his room talking to the animals. Those of us that did the decorating found it a pleasure to work with and would happily recommend them to anybody that is thinking of decorating a child's room. 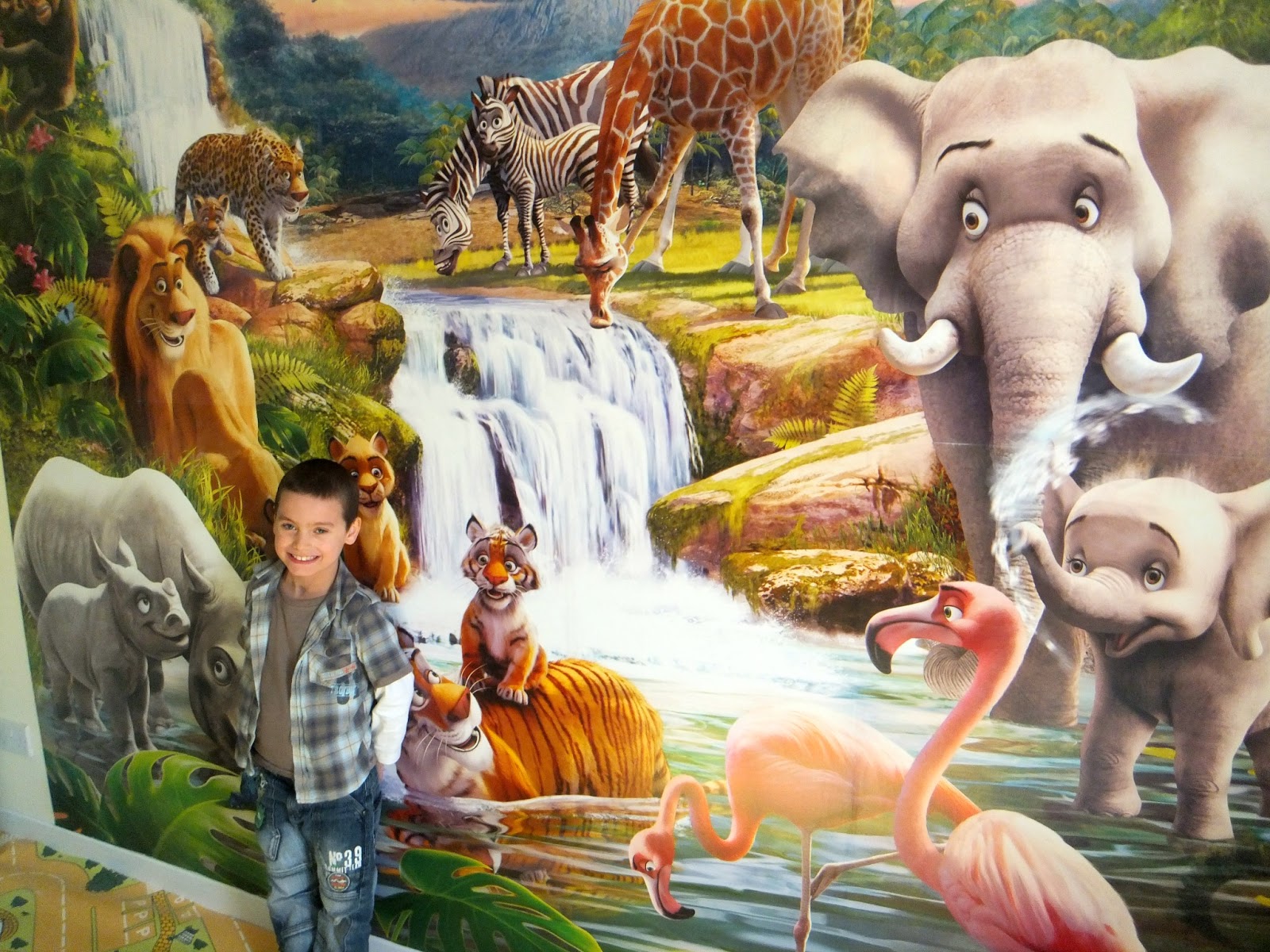 We had a few thoughts on this product, and theses are our thoughts from having used the product. We cannot understand why the six mm overlap, ours did not shrink and if it was to shrink you would surely be left with the lines visible that are marked on the paper to allow for the lining up. We also felt that allowing for the fact you do have the overlap we should have put the bottom ones on the wall  first so that the visible line was facing down the way rather than up the way thereby being less visible.
The instructions also say to trim the mural once it is dry, but OH decided to trim it as we went along as he thought it would be easier.

We had a quality control issue with our mural.  We noticed there were slight difference in the colour between the top and bottom sections. But having discussed this with our contact at tots100 and Dulux they kindly sent us out a second product to use, and this one is spot on.

In regards to this Dulux tell me

the reason there was a colour mismatch on your paper was because the papers you were from a special print run just for this campaign, and the first ever to be printed in those designs. This took place several weeks before the retail product was printed. The error you had was because of this short, one-off print run and wouldn’t be replicated for consumers

So you can purchase yours will full confidence that this will not be an issue for you, and I would not let it put me off buying another one.

Lastly we have the unveiling of the room. Remember Bob has had no sneaky peaks as he has not been here all week.

We were provided with a Bedroom in a Box for the purposes of this review by Dulux and Tots100. You can find out more about the Bedroom in a Box range on Facebook, Twitter, YouTube and Pinterest

( and a jar of honey and a potted plant off Bob for doing it while he was away. )

Email ThisBlogThis!Share to TwitterShare to FacebookShare to Pinterest
Labels: a review, bedrrom in a box, Dulux, jungle adventure