Been rather a yucky week mentally as I am losing the will  to live as they say, finding I am letting the frustration and lack of sleep get to me. Approach with caution should be advised as I am snapping, short tempered and prone to tears. Not done anything this week that I don't have to do, happily sitting in the dust and looking at the hoovering that needs doing and finding it hard to muster up the energy and enthusiasm to get off my bum and do anything. Sleeping at nights have been broken by pain all week, up and down, sleeping for an hour, walking round till the pain eases off and back to bed. This week if I have not managed to drop off again I have got up and watched rubbish on the tv and done jigsaw puzzles but even that proves sore after ten or fifteen minutes. Making for long days when up most of the night but as I am not working have gone back to bed and got an hour a few times every day, not ideal but currently my way of coping.

When he had dropped off our old table and chairs to a local woman who wanted them after we got a replacement last week, hubby had mentioned friend was looking a freezer to help him budget a bit better. She just so happened to have one available from a house she was clearing. so hubby picked it up and took it to friend. He took dog and walk her while there.

Had Bob for a couple of hours while mum and dad took the three wee ones to do some dancing. It was part of the local light switch on ceremony. Got them to pick me up a hot water bottle while in the town, anything that might help with the pain.

I slept on and off and did some rubbish tv watching.

DD3 came to visit to pick up her birthday cake from yesterday as she was at the hospital until late. 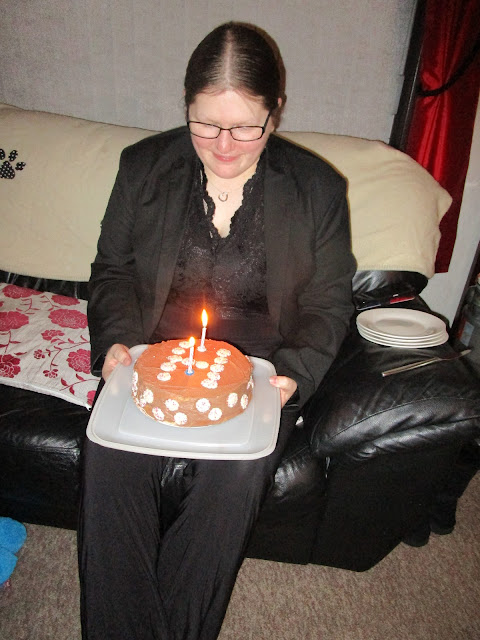 Fifi turned 17 today. She has decided for her birthday that she wanted us to fund raise for a charitable organisation called over the wall that provides a week away for children like her who have disabled family members  and have more responsibility than many children their own age. She has been away for a week with them every Summer for a number of years now and gets so much out of it she decided to pay back.


Hubby was in visiting friend and walking the dog. 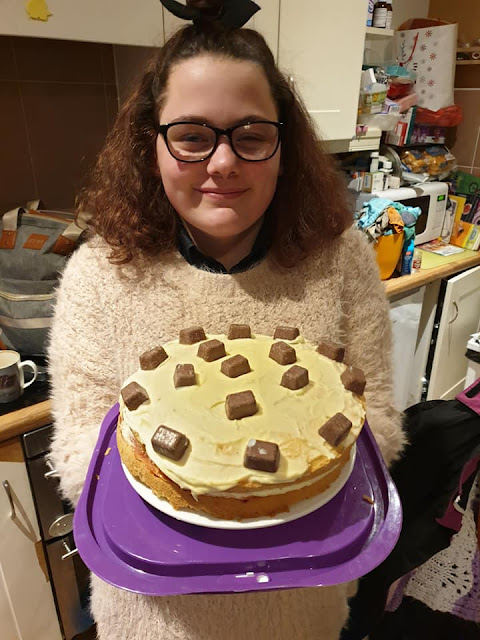 Up half the night, well 1.15 am and slept a bit from 5 to 5.30, as the night seems shorter if I get up and do something rather than lying annoying myself by tossing and turning.

Managed to finish the jigsaw puzzle. 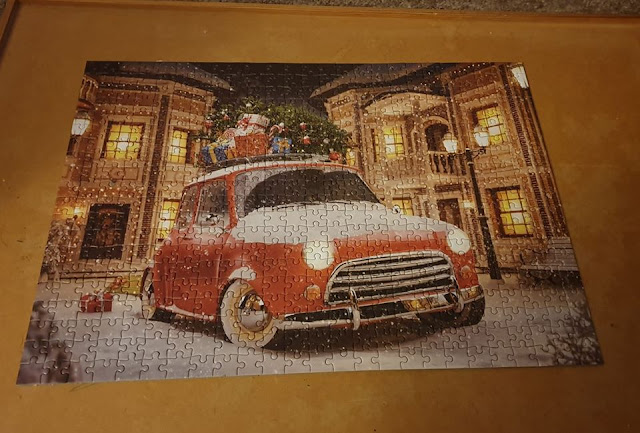 Phoned back to GP to change anti inflammatory tablets and picked the prescription up. Hubby walked the dog and visited friend.

Started the next jigsaw and got the edges done in my night stint.

A dietitian appointment that GP booked me in for months ago. He decided my cholesterol was to high at 6.2 and I should do something about it. So dietitian was to give me some advise on what I could healthily eat and what to avoid with my allergies - already know that. She ran through what I normally eat/cook etc and was happy enough. She suggested adding oily fish or even white fish once a week and a few handfuls of nuts a week. Will take her comments on board next time I go shopping.  The last few weeks have been rubbish diet wise as cant be bothered to cook/shop/eat so snacked a lot more than normal.

DD1 phoned to sat she had won tickets for the panto from one of the competitions I had passed across. So Cinderella shall go to the ball after all.

Hubby stayed at home today and sorted out the sheds as he keeps moaning they are messy. 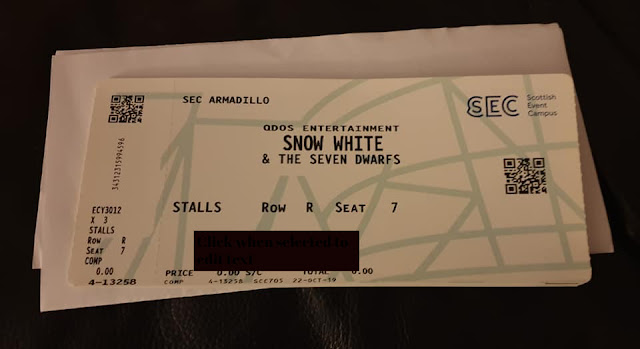 Hubby finished off working in the shed and then we went in for my occ health appointment.
He has given me some exercises to do and back next Thursday to discuss how I get on at my neurology appointment. Hubby walked the dog while I was in and then we went to friends house. Hubby went in and I wandered round the shops first for a few bits for the twins birthdays. Then went into friends for half an hour before home to write cards and wrap presents.

Took their cakes round that I made yesterday. They were as high as kites and buzzing from thing to thing. Dinky wanted a chocolate cake and Minky decided he wanted a blueberry cake, so that is what they got.

Minky got the Pokemon hat as part of his birthday and it has not been off his head since he opened it, even kept it on all day in school. 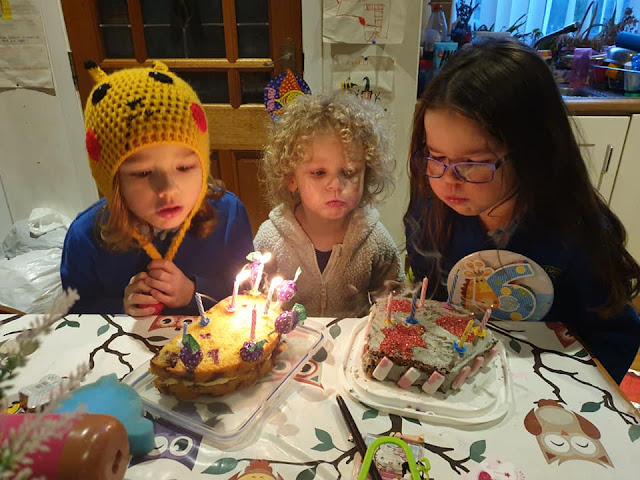 For some reason had a good nights sleep. Did wake in pain once or twice but luckily enough managed to get back to sleep and did not get up till nearly 9am....unheard of for me.

A day in the house playing catch up with the kitchen. cleaned the halogen oven, cleared out the cutlery drawer, did the microwave, toaster, kettle and tiles. Watched a couple of crappy films on the kindle while doing a jigsaw, the tv is to difficult to see from the table.

Hubby went into town to pick friend up and take him shopping.

Phoned for my x ray result and it shows some osteoarthritis in my shoulder. This would explain why the Prednisolone worked and nothing else is.

A very nice friend gave these to me, every little helps. Never been in a farmfoods for long enough as most of them are difficult to access by car but if I tie these in with the vouchers that came through the door then I can get £25 worth of shopping for £7, well worth dragging hubby to to carry the bags back to the car. 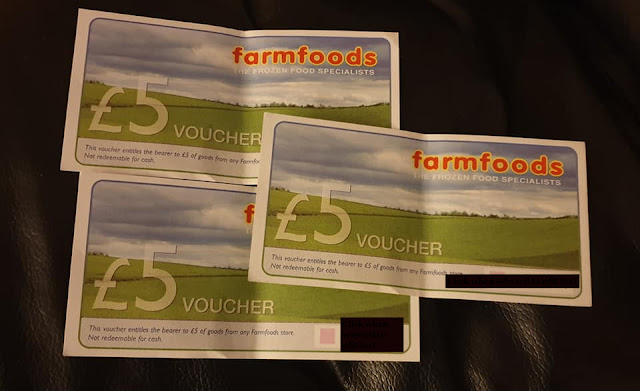 Hubby had an optician appointment at 9am. While he was in I wandered the charity shops and bought a few bits for Ziggy's Christmas.

Went into friends to kill some time and hubby walked the dog while I was away to the hospital.

I had my neurology appointment but he could not really come up with anything. Decided to do more blood tests, must be two weeks since they were last done.........referring me for an MRI scan and nerve conduction tests.

Got hubby to dig the Hama beads out the loft, on the theory if I can do jigsaws I should be able to do these but will depend on how much feeling I have in my finger ends. If I can't knit for the grandchildren will try making the something with Hama beads instead. 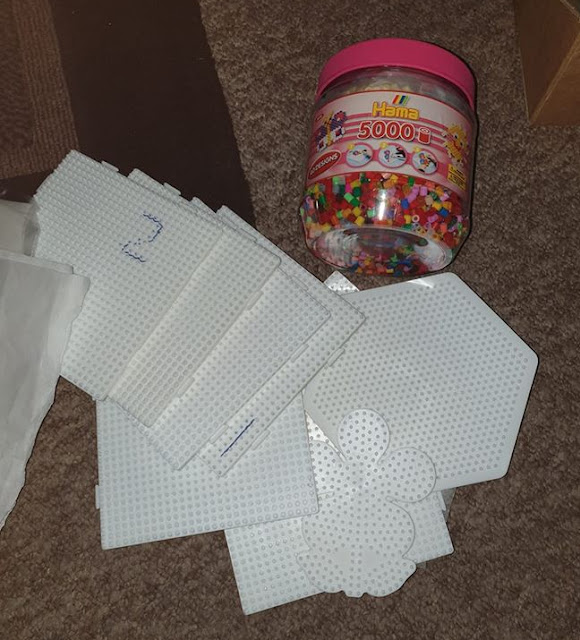 You are invited to the Inlinkz link party!
Click here to enter
Posted by fun as a gran at 18:26