Like the rest of the country we have been sweltering in the heat this week. The kids are crabby and argumentative. Fifi is grounded to the back door and has had her phone taken off of her for her "attitude". So I thought I would take them out give mum a break from them. So we headed off to Eglinton Park in Irvine. Never been before, passed it often enough over the years, and as there are some geocaching events on there this week I thought we would go and check it out.

There have been quite a few new caches placed round the local area due to the Mega event that is being held locally so we decided to do some of the drive by ones on our way up. They have all been placed in lay bys along the bypass, so with due care and attention and being very vigilant of the children we managed the ones on the way up.
We arrived at the park and had a look at the layout before we wandered off. 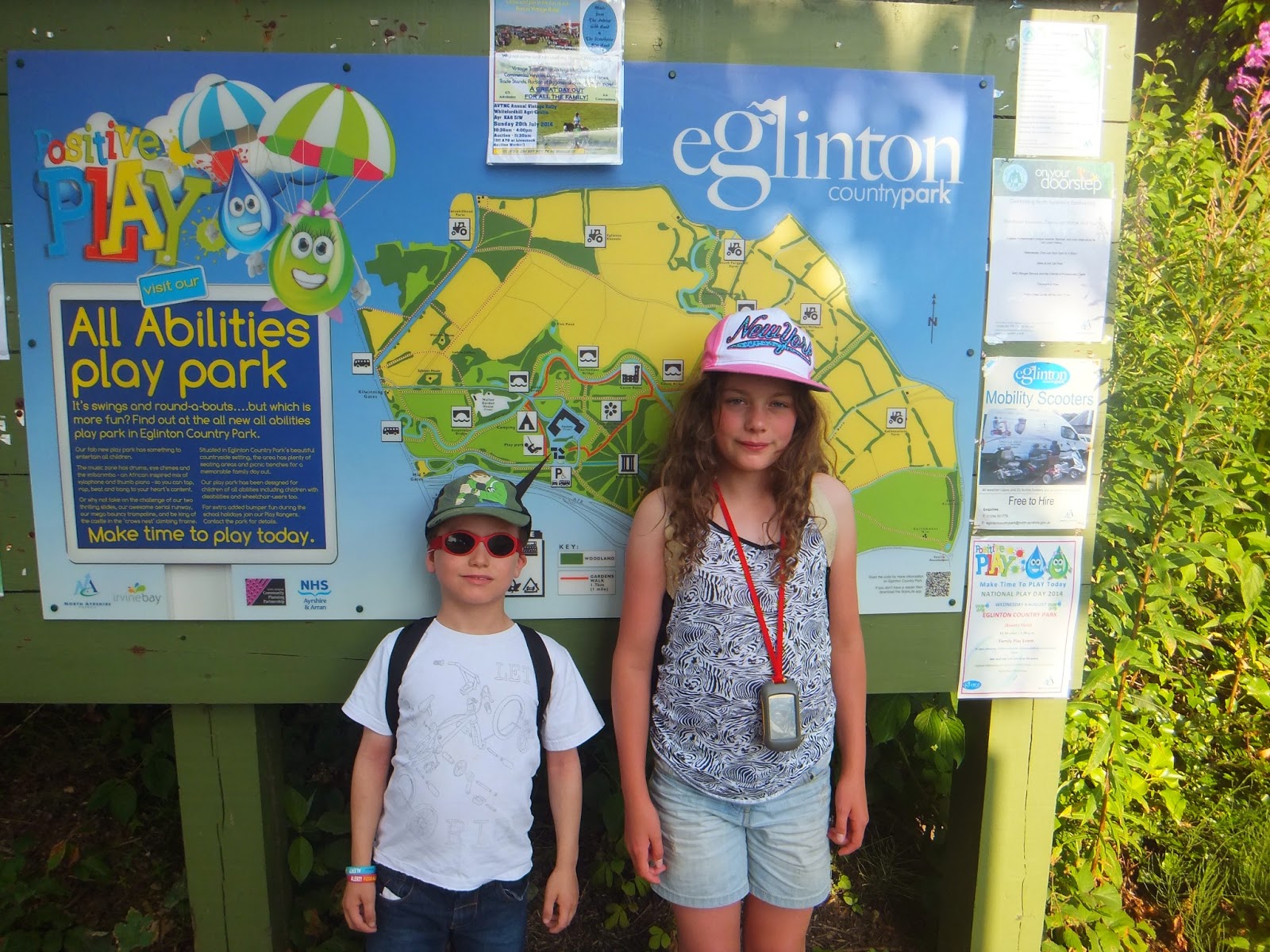 First off we wandered round the park doing some caching. The children took it in turns with the GPS to track them down. We managed to pick up ten in total.

Some of them were easy to get at, other involved getting wet - so we gave that one a miss. But this bridge looks beautiful.


We wandered round past the castle

Once we had finished picking up some of the caches we headed to the play park. It  has equipment suitable for all age groups. Fifi likes the trampoline best. We wiled away nearly three hours in the park in total, and I drop them back off just before 9pm, both hot and exhausted.


As Thursday is my day to have the children I asked them earlier in the day where they wanted to go. Offered them the river, the beach,a park, and so Fifi decided they would go to Dumfries House, a local property owned by Prince Charles who rescued it and paid to renovate it a few years back.

There is quite a bit to see up there but to be honest it was too hot to do much walking round and as daughter and the twins came with us we decided to stay in the shade of the trees and play in the play area. There is a seat there carved out of a log and I got them to sit in it and have their picture taken, Bob was not amused and put a scowl  on his face. 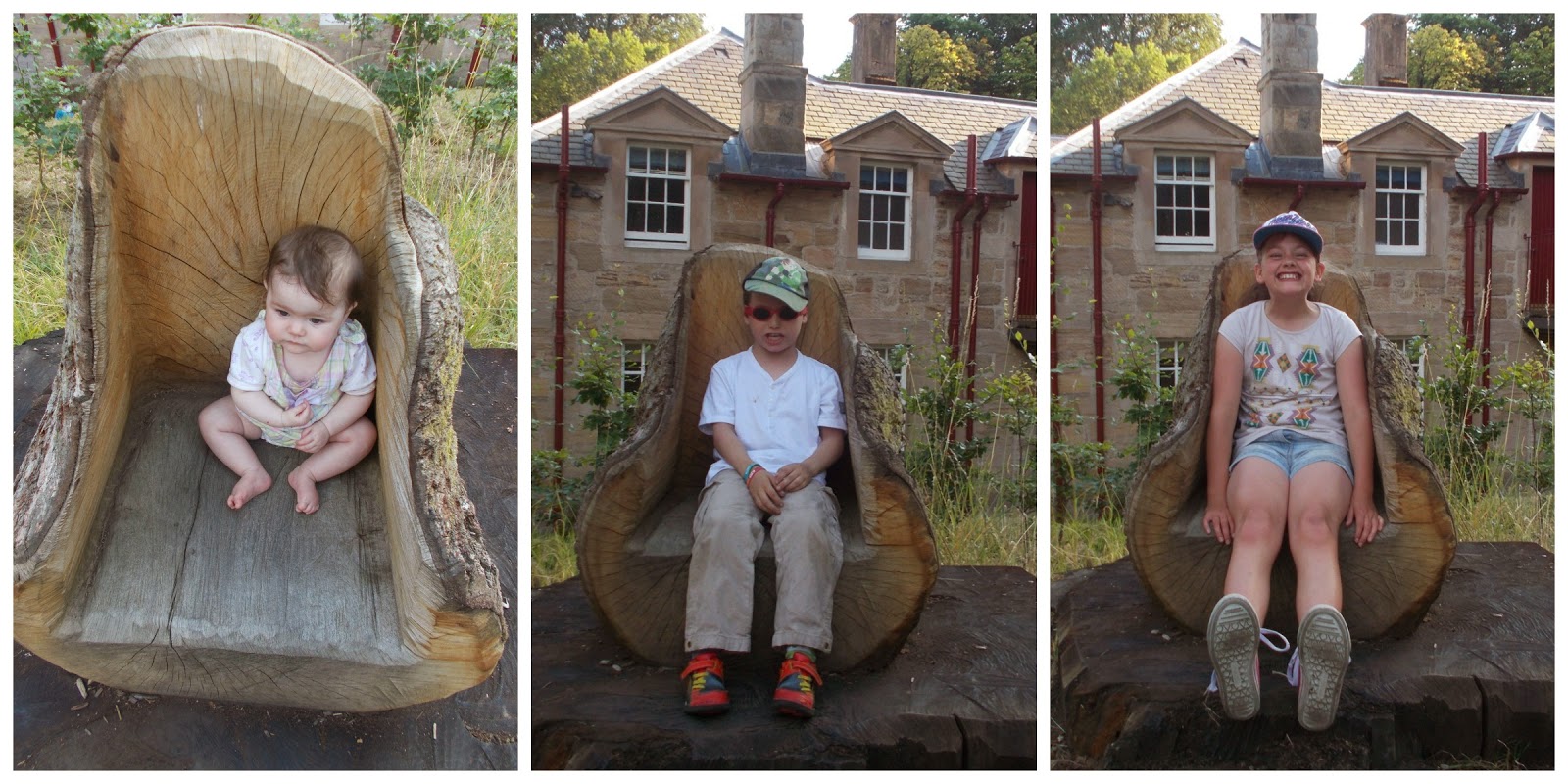 This looked like a giant Jenga climbing frame. They climbed up and then slid backwards down the poles. 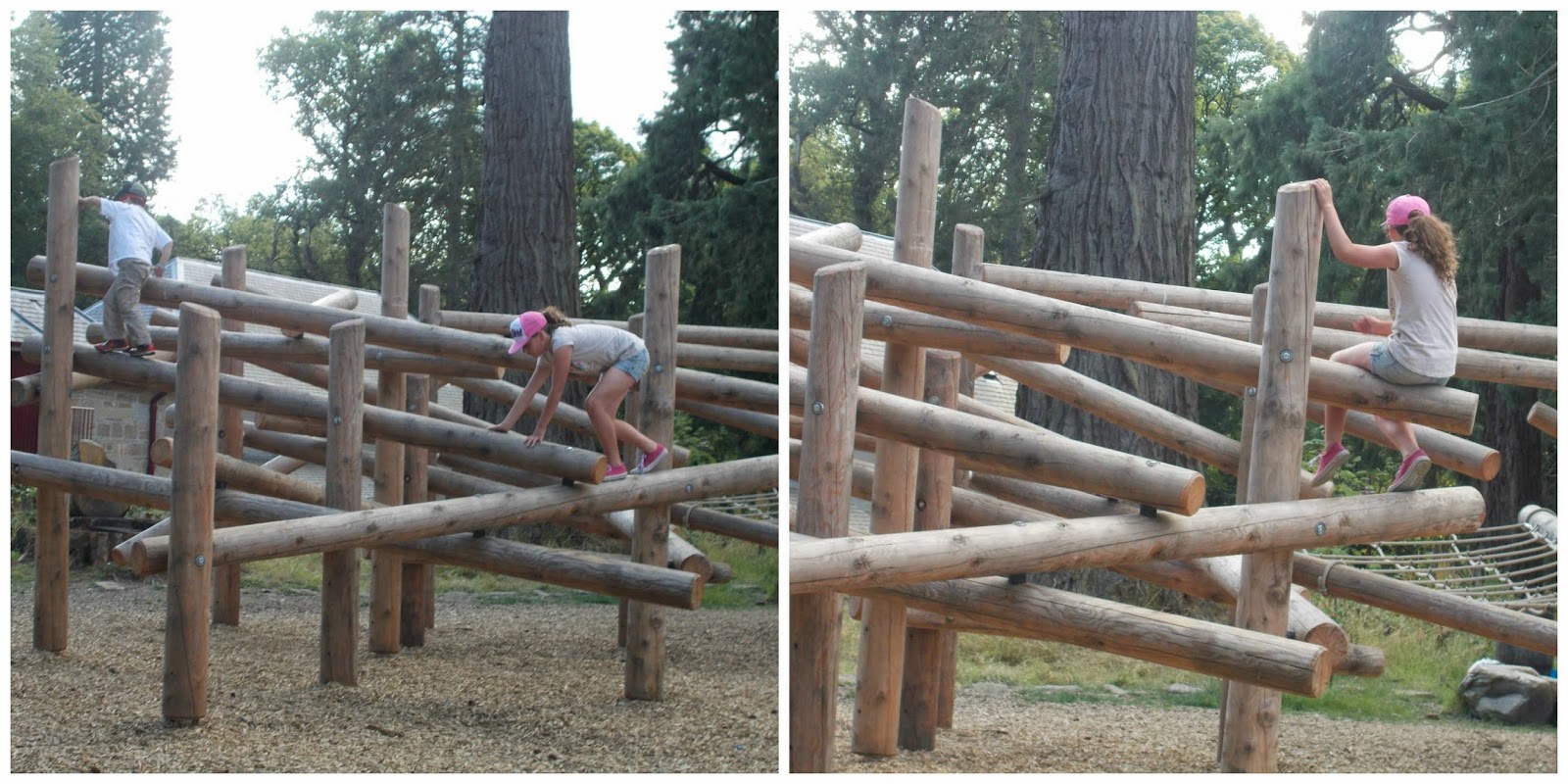 I had hold of Dinky quite a bit of the time we were there, and did various things with her. Both of the twins liked feeling the different textures of the rough bark and the smooth pieces of wood, to standing on the chipped bark.

They both liked the round swing, and were giggling when being pushed. 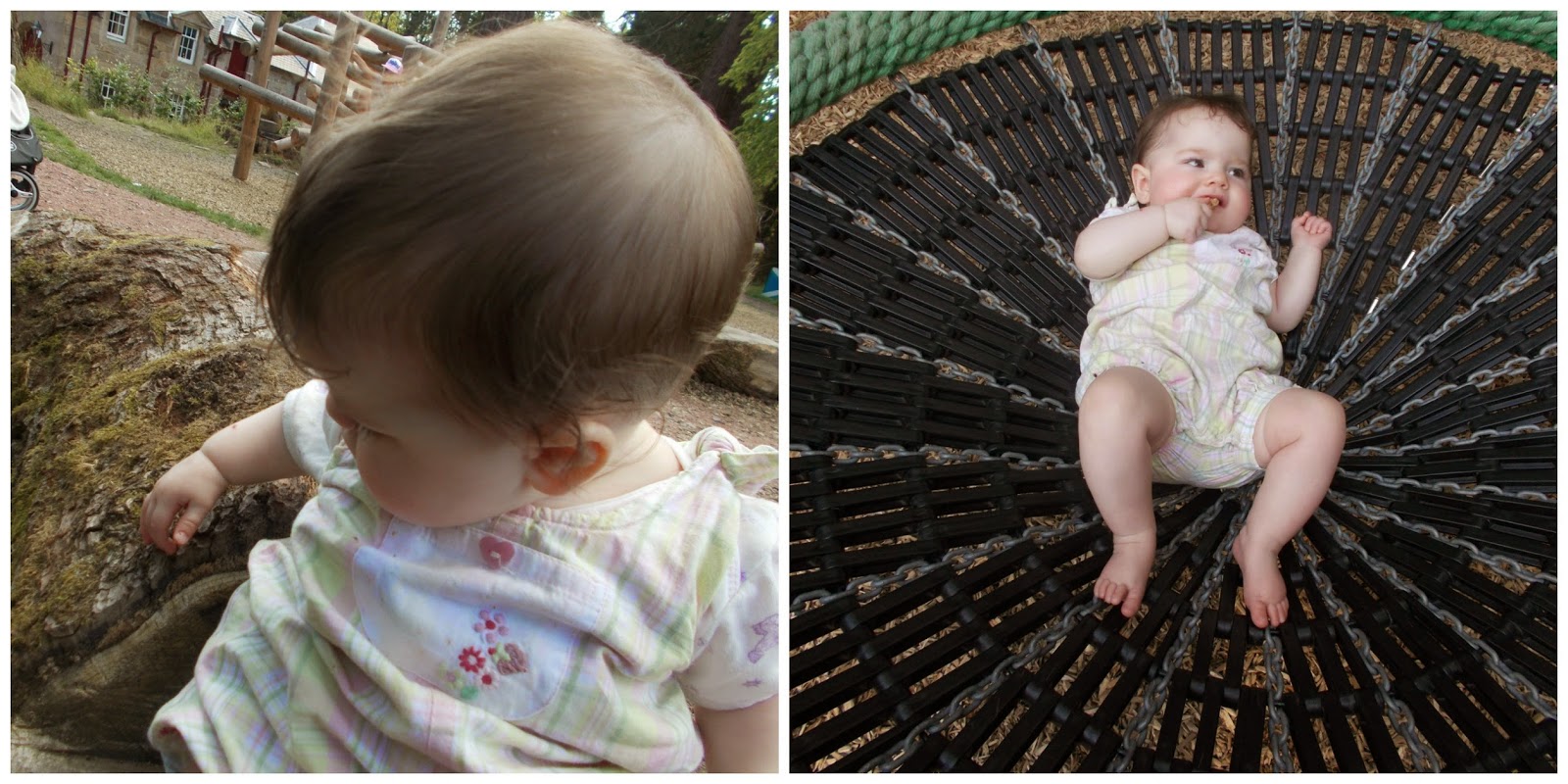 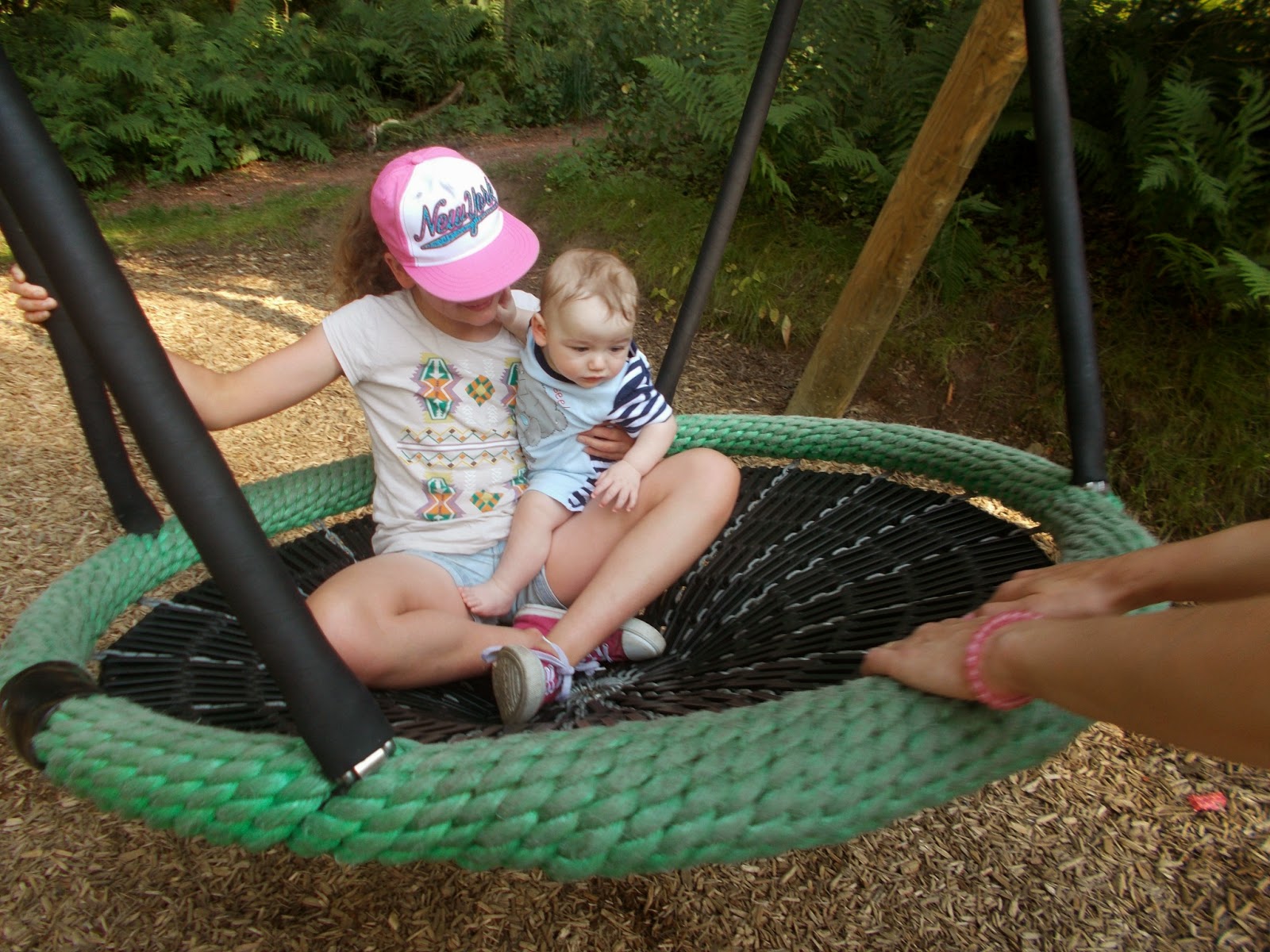 
There was also a zip wire swing there, Bob insisted on pushing his sister really fast on it, but then he could not keep up safely and fell over and hurt himself - not once but twice. He has a lovely bruise on this hip.

The only piece of equipment  that was toddler sized was a small climbing frame, so we sat them, both inside for a while. Again they were intrigued with the smooth texture and had too try eating the bark.  They are getting comical now as they hold a conversation with each other and babble away. 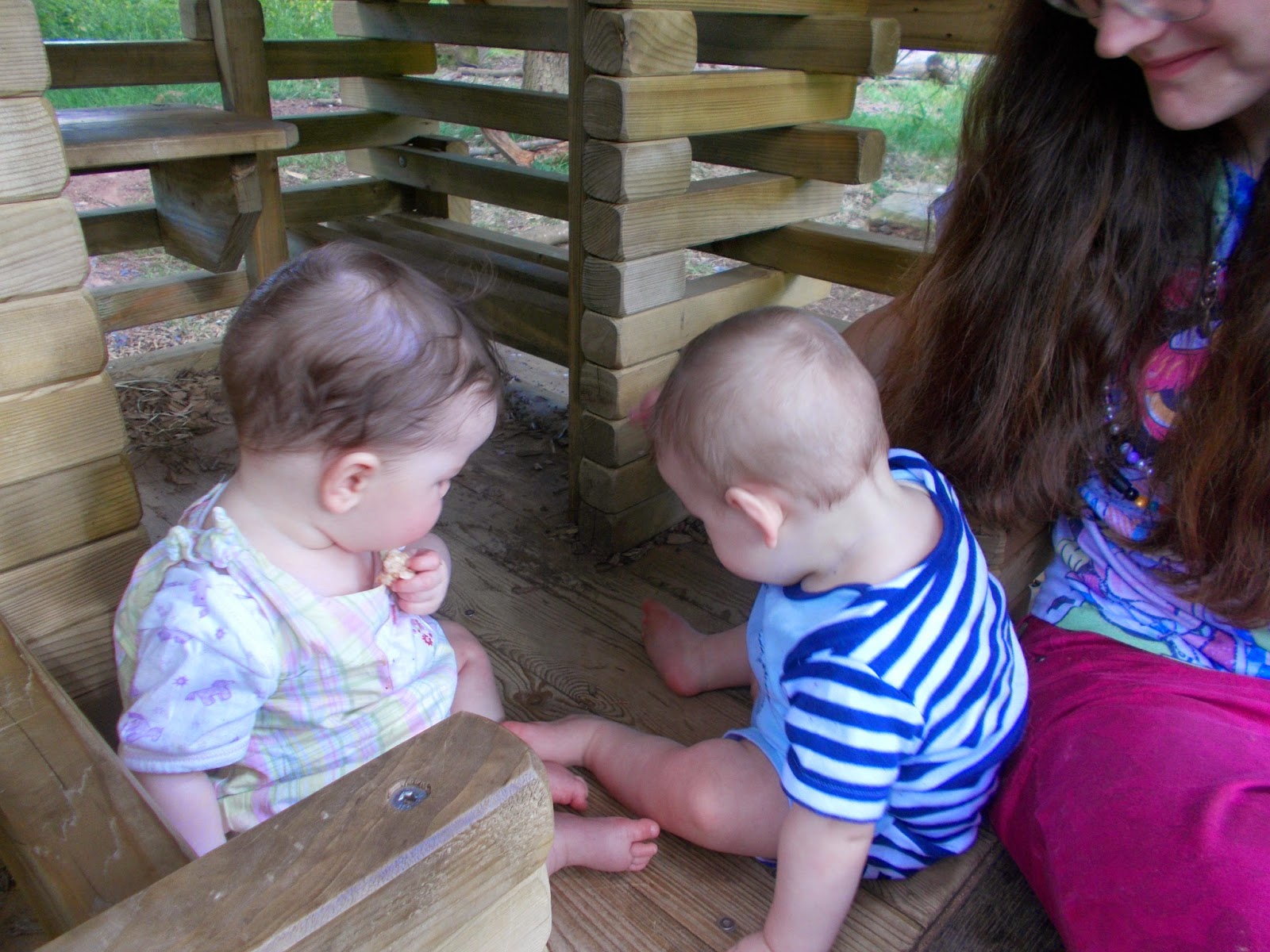 We went up to see the sundial. 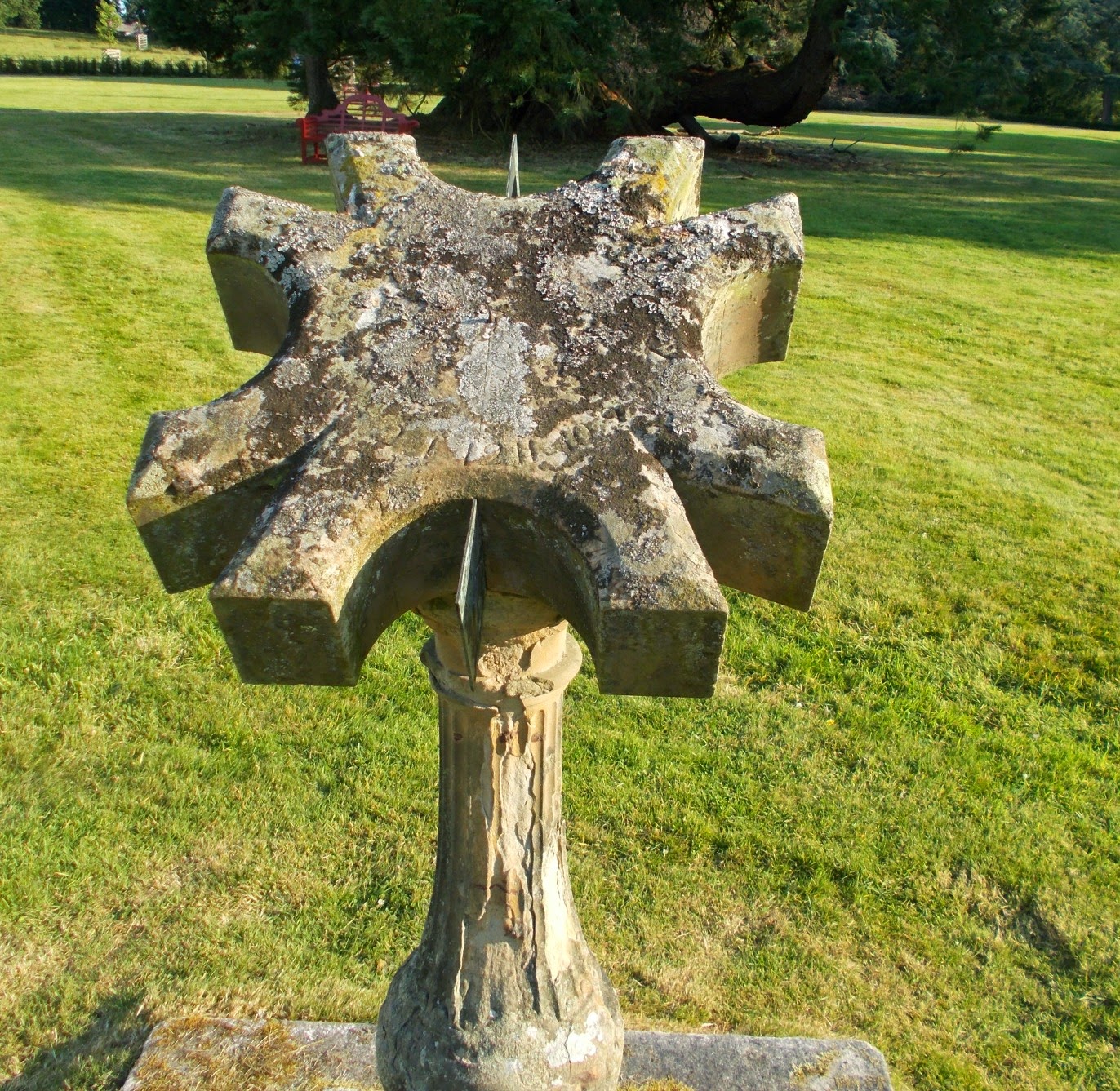 The surrounding farmland as part of a Morrisons farm and they have sheep and cows there. We discussed how they would be available to buy in Morrrisons shops for people to eat. 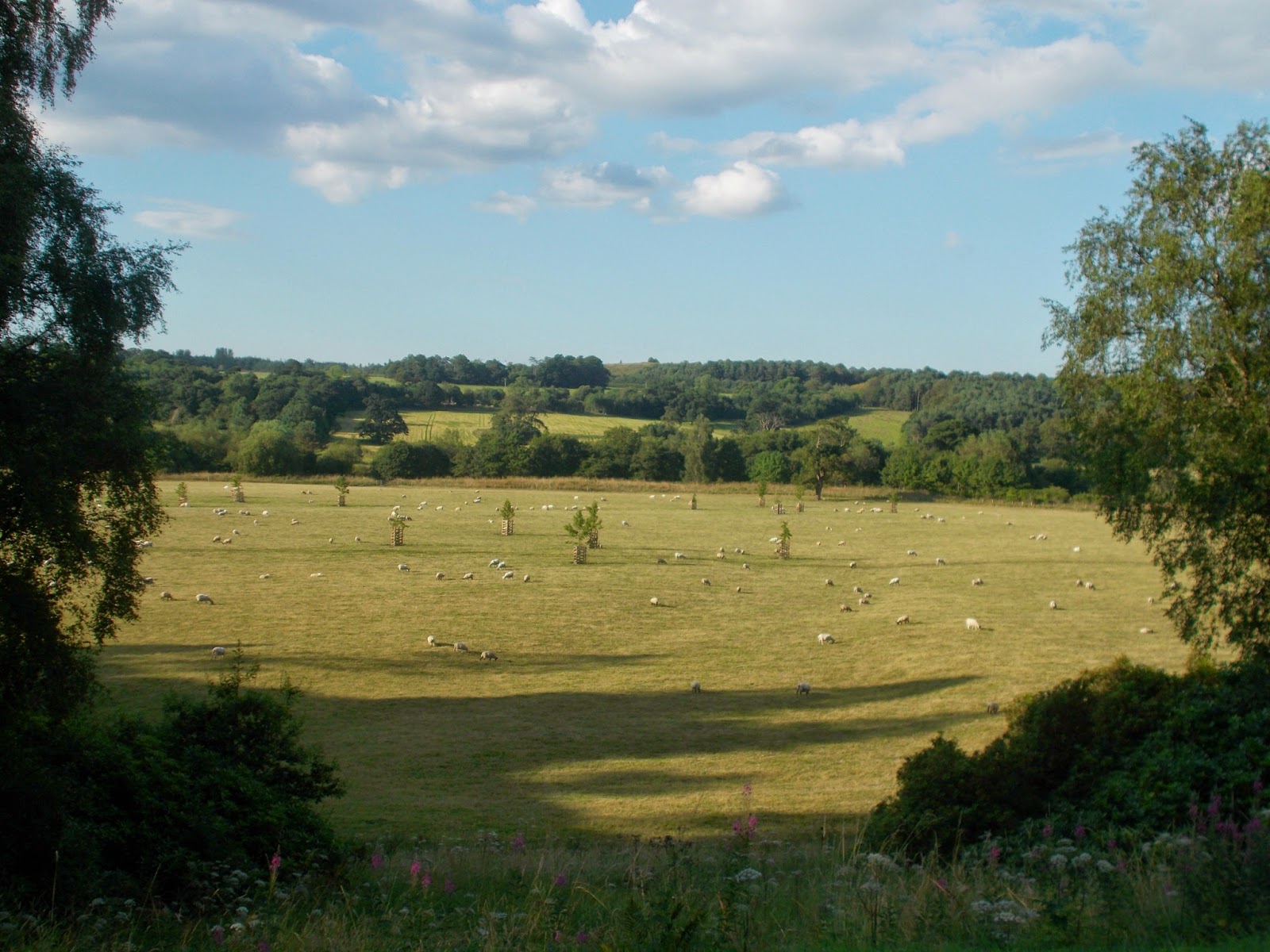 It is just a shame really as both places offer parks and play areas open for the whole family till dusk, but close their toilets and cafes before 5 o'clock, never understand why.