Half way through the year. Our schools broke up this week for the Summer holidays, lets hope the weather stays nice for them. Hoping to get out and about with DD1 and the kids even if it is only down the woods or round the fishery.
Bob had had a gymnastics display last weekend and came home really pleased with himself as he won a certificate, only one he has ever won in seven years of gymnastics.

The usual for now, a long day at work with the end of an episode of wire in the blood started yesterday in my break and doing some more of the latch hook rug.

Finished off this bobble wool blanket, first time I have ever used this type of wool but a quick and easy knit. Did start a crochet cardigan but don't think the wool did the pattern any favours so undid it again, will try the same pattern with different wool. 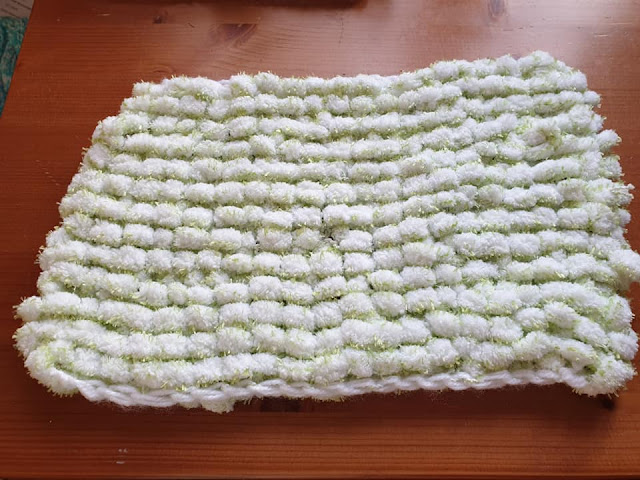 Into the town. Friend had a hospital appointment in the morning and a GP appointment in the afternoon that hubby ran him to. My plan had been to walk to the surgery from where I was, a little under 2 miles but the rain was bouncing off the roads with water running in rivers down the streets so I just got them to pick me up.  His sister met us at the doctors and we dropped the two of them off in the town before we walked the dog along the river and then headed home.


Decided to photograph this statue and see what it was all about. Live and learn as they say. 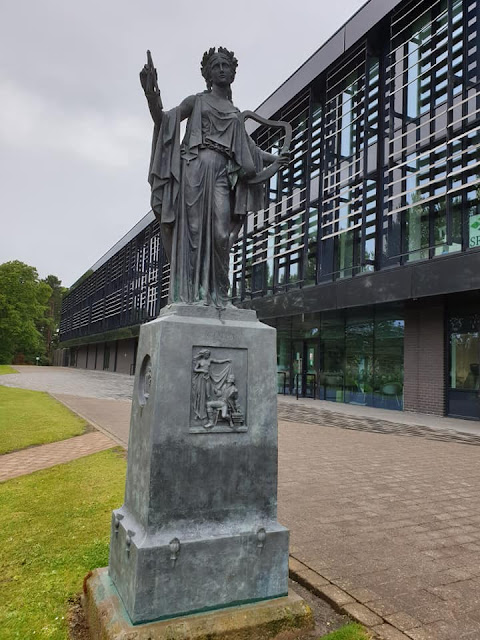 Dropped hubby on my way into town and he walked to friends while I did a few bits.

Went for a walk myself when I had finished and then got them to meet me at the red bridge, this gave hubby and dog a chance for another walk.

Friend came home with us, we went via a few shops so he could get some bits he wanted and we got a bag of cement so him and hubby could finish off the wall that was started months back. Hubby took friend home just after nine and I played with the wii while they were gone.

Hubby takes quite a pride in the garden, I never go out there other than to hang the washing out. 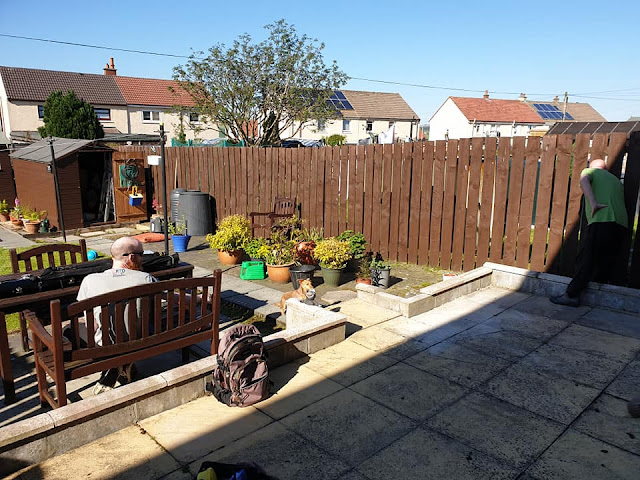 The weather is way to warm for my liking. I was in the town and was asked to pick friend up so him and hubby could go fishing later on, and it saved hubby going back in for him.
Payday and I know I needed shopping some point before the weekend, had a £12 off a £60 spent to use so did not want to miss out. Decided that it was better to go while hubby and dog were not with me as way to warm to leave the two of them sat in the car, so did my shopping and picked friend up.
They puttered around in the shed doing man things, we all walked the dog down the woods just after 6, and then they headed off. A peaceful evening to listen to my audiobooks and mess about with more crochet, one project did not go quite right, the other did.

These are in a pot in the front garden. look very pretty when in bloom, sadly they do not last long. 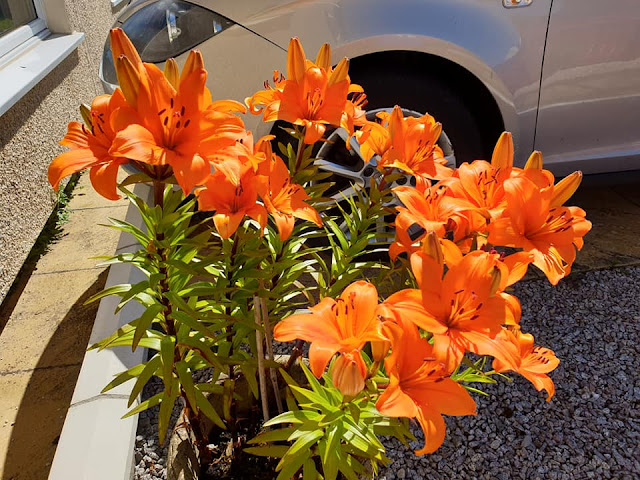 Another too hot a day, we reached 27 with an average of 25. We had planned on going somewhere for a day out but no point in these temperatures. We did end up going into the town as somebody was selling lavender plants. Love lavender and how it attracts the bees when it is in flower. While in the town we walked the dog under the trees in Rozelle park, a little over 2 miles but enough, was still warm even on the shade. The plane was not painted last time I was here, looks great.
An afternoon nap, some crocheting and a walk round the streets with the dog just after 9pm. The woods and fishery would be full of midgies at that time of night. 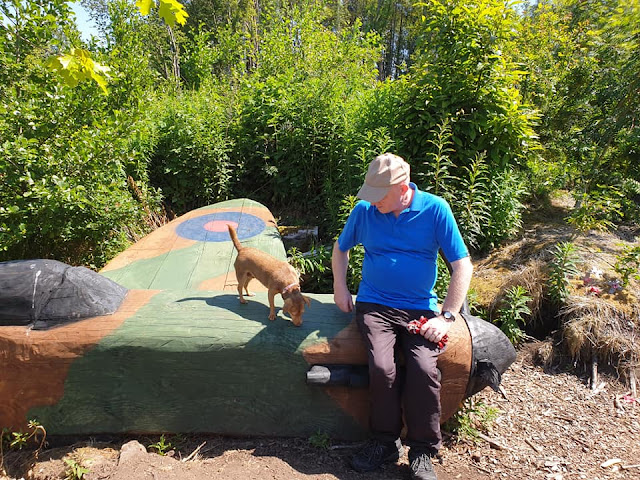 Bob's last gymnastics session, they are having a party.  and so I was down to watch the wee ones while DD1 picked him up. Way to hot to go the park and they were just going to have their tea. After tea I got slimed with one lot that I was told looked like bogies...and the other blood. They think it is hilarious when I  pretend to try and run away so they cannot slime me. 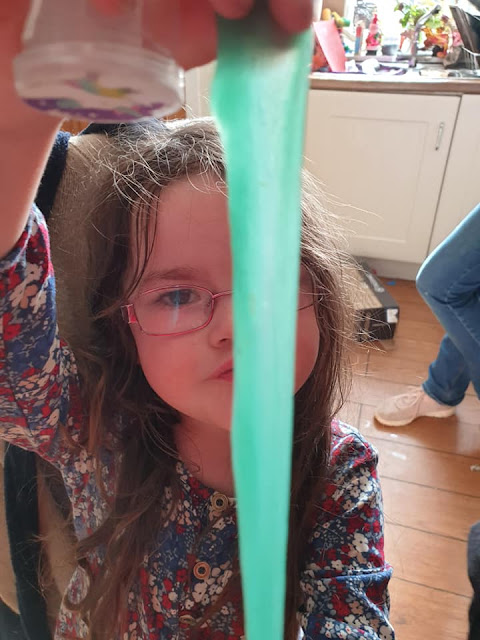 Hubby went to see friend for the afternoon/evening so I found a programme called London Kills and watched the first two episodes so far with two others downloaded to watch at work. I finished off two crochet projects from Wednesday, adapting the one that went wrong to fit a prem baby instead of a new born.

Have other people noticed that the crochet items feel more course to the touch than items knitted with the same wool?

I was not a lover of circular needles, I was always under the impression you had to knit circular things with them, but it was explained to me that you can use them as normal. A few weeks back I used the one I had to knit the blanket with as I had lost one of the needles I have put down five minutes before. I am a convert now and really quite like them, so I ordered a full set, cheaper than buying the four sizes I normally use. 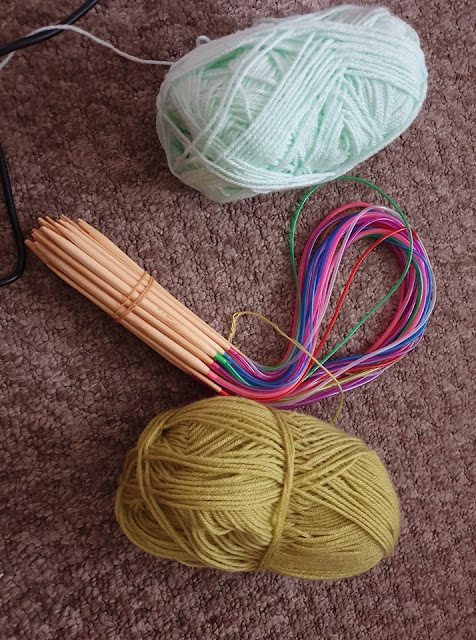 You are invited to the Inlinkz link party!
Click here to enter
.
Posted by fun as a gran at 06:56