Another week of sleepless nights, though pain wise things are improving, out of ten ( what A&E always ask) during the day I would say I am about a four, at night about a 12......though more short lived than it was, maybe only taking ten minutes to die down when it wakens me, managing this week to sleep for an hour awake for an hour,last week overnight I would have put the pain at a twenty two.......with no sleep at all. This week maybe managing three or four hours overnight one hour at a time and the odd hour during the day. Definitely progression as now more able to pinpoint the point of pain rather than the whole arm being that sore I could not tell. A sick line for two more weeks at the moment, gets me past my neurology appointment and see how it is going.

Basic tasks such as dusting, hoovering or simply getting my left arm into my jacket are very painful. Not to mention forgetting it hurts till you raise your arm and reaching to do things like opening the door or reaching for stuff on a shelf.

We have had a lot of cold and frosty mornings with just the one day of rain.

We watched Dublin Murders, vert strange ending that left you wondering about many things at the end, did not really finish..... Nearly finished The Frankenstein Chronicles.

Hubby had seen a mahogany colour table and chairs on Facebook Marketplace for free a few weeks back. He enquired about it as was advertised as local. Turns out the mother was local and the people with the table not quite so. So we decided if we were going to go the fourteen miles to pick it up we might as well go the extra few miles and walk the dog up at Whitelee Wind Farm. It was absolutely freezing but dry and sunny. 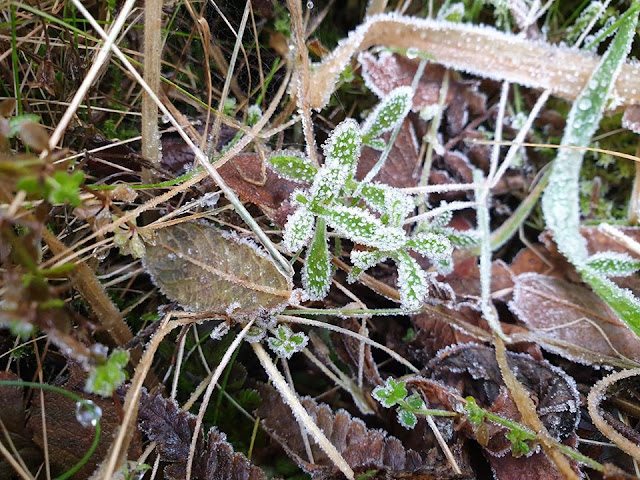 Decided to take another dose of steroids despite the GP not being so keen. She is not the one in pain and they work so don't see her problem.
Had an appointment with the Practice Nurse for a check on how well the new inhaler was working, the answer to that is great, about the only bit of me that is working right at the moment. Got my flu injection while I was there as well. Walked the dog again while we were in town anyway.
Hubby popped in to see friend for a while as he is back from his mum's, he was away for two weeks, which was giving me one less thing to worry about.

Managed to drop the oven tray on the floor getting the tea out of the oven,yes I know should have shouted hubby but I am independent and stubborn,  lost probably half the rice as it splashed everywhere. This is the sort of thing that makes this arm issue annoying. Luckily nobody got burnt and no lasting damage done to the laminate.

Got my letter through for my neurology appointment, much quicker than I expected, but not complaining. Can't wait in all honesty. 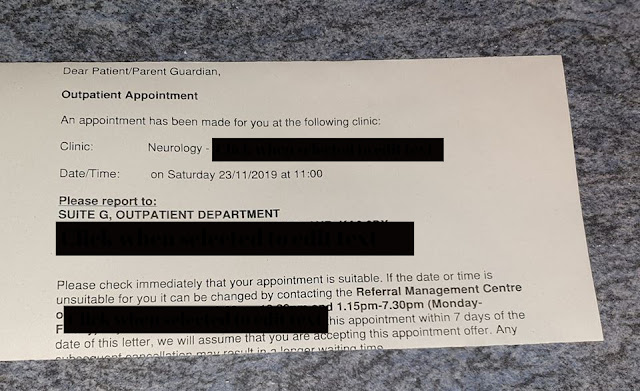 Back today to see the GP. Got the results of the blood tests for the inflammatory markers off the nurse yesterday so knew they were down on the last ones but still higher than normal
GP said she fully understood my pain and frustration but would not prescribe me the anti inflammatories as she was still not convinced it was an inflammatory condition despite the effect they had on me I am not happy in the least about this and so asked for a second opinion.
So another appointment tomorrow afternoon. Just don't understand the reluctance to give me something that helps, I appreciate they have side effects but I am only asking for a few weeks not twenty years worth, and personally feel they are doing a lot less harm than the other stuff they seem happy to keep me on long term when they clearly are doing nothing to help.

She did suggest xrays on my shoulders and so have an appointment for that for Thursday afternoon.

Another walk with the dog while in the town.  Also went for a wander round the charity shops to pick up some bits for the grandchildren's Christmas while hubby went in to visit friend. They won't notice there is no cellophane wrapper on the boxes.
Talking of Christmas I am quite saddened this year, have taken the older two to the pantomime ( oh yes I have) for years now, part of their Christmas and a tradition I was hoping to carry on as long as they wanted to go, Fifi says she will still be going when she is 25.....but the last few years I have got a deal through work on the tickets, but with being rather ill and not at work for so long then I missed the boat so to speak. As approx 1/3 of my income is made up of overtime I cannot justify the best part of £100 to take them. Hoping to see more competitions coming up to win tickets so fingers crossed. 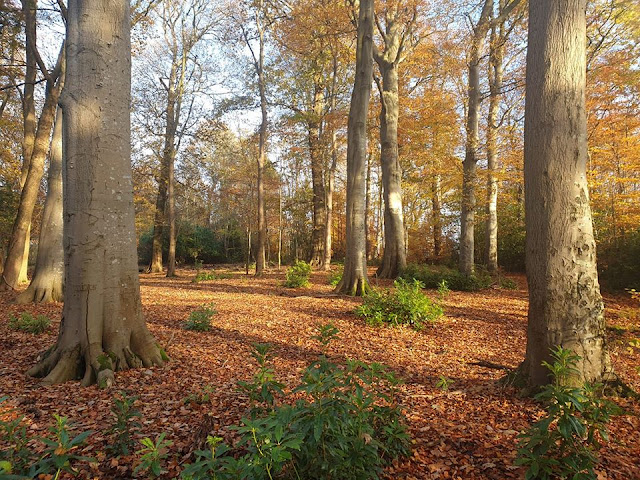 The prednisolone has worn off, as was to be expected, lay in bed in pain from 3am, moved through to the spare bed at 5 so I could put on my kindle without the need for headphones. Gave in and got up at 7.
Hubby ran friend to the hospital in the morning for an appointment.Brought friend back for some company for a while and then ran him back hone after I had been back to the GP for a second opinion. Felt sorry for the people with appointments after me as was in for about forty five minutes. She poked and prodded and pushed and pulled and queried and questioned and hummed and hawed, and then explained her decision. While she was not happy to give me prednisolone she did give me a newer type of anti inflammatory, she said the prednisolone might mask a more serious issue that neurology might then miss. She said her first rule is do no harm.

We dropped friend off, walked the dog and did some shopping.

Bought a tub of sweets, mainly to use the loose sweets to put on the twins birthday cakes next week. But DD1 informed me that parma violets are dangerous and need to be handles with care and that I should hand them to her for safe disposal........personally cant stand the things, so handed them over. Cheating here as this picture was taken on Thursday, but do not appear to have taken a picture today. 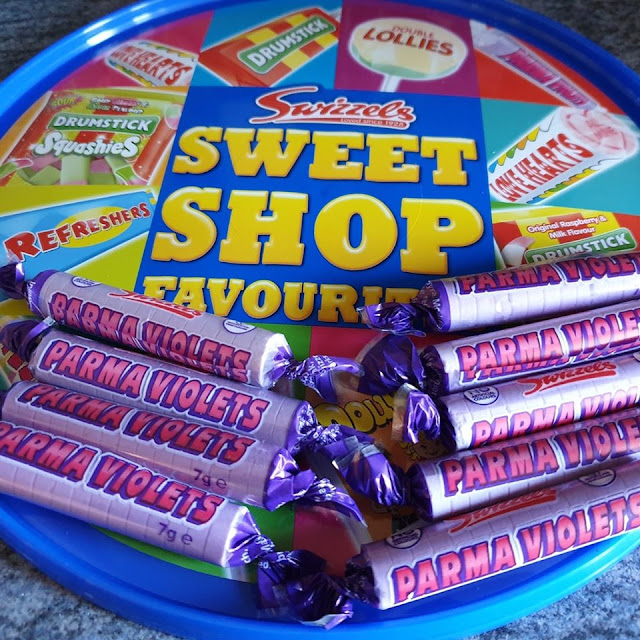 Watched Bob for a while in the morning as he has been rather ill again this week. With the instructions that he needs to do his peak flow at 11am and if it is 250 or less phone an ambulance.....great thanks.....anyway did not need to panic.

I played catch up with some housework and some silly little jobs of cleaning drawers and the like.

Walked the dog along the beach before heading to the hospital. for my xray. The council have been scrapping sand back from the wall and leaving it in piles, the dog had a ball.  A nice quick in and out in less than ten minutes.

More bits and pieces and drawer tidying.
Wandered down and round the local park with the dog and posted a letter while I was out.
I have been after a dishwasher for a while, hubby spotted one last night for free on Facebook marketplace so took SIL1 with him to pick it up. It will do me until I can afford a new one.

Shoved into place though not plumbed in yet. There is a kick board that runs along the front that will need trimming down to fit as well. 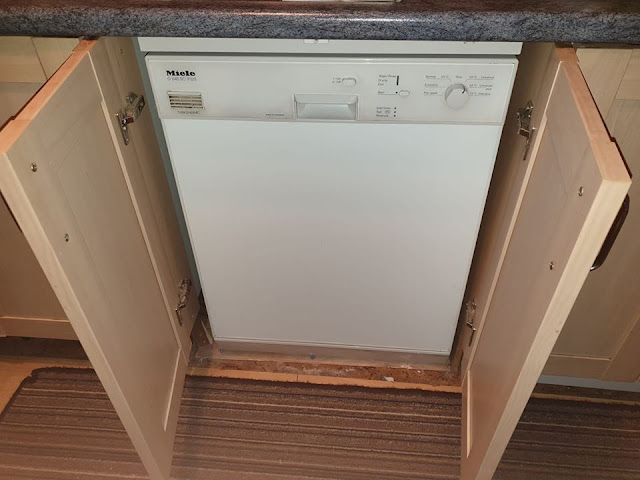 Today is DD3's birthday. So here is the first of four cakes needed for this week. Planned had been she was coming to the village to pick it up, but SIL3's granddad was taken ill so she went  with him to hospital instead. Nobody else available to go apart from SIL3 and he hates hospitals and gets way to stressed to be any use to anybody. Another family member turned up to keep her company. 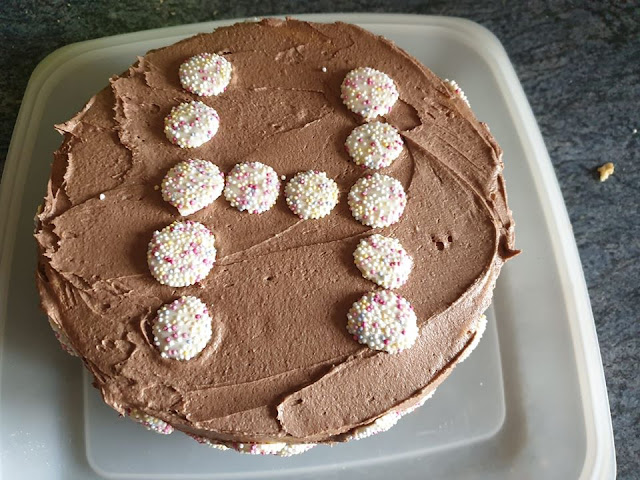 You are invited to the Inlinkz link party!
Click here to enter
Posted by fun as a gran at 18:17