Sunday
A late shift at work with some crocheting and tv watching before I went out.
I think my Persil is breeding in the upstairs cupboard…..I had four £5 vouchers to spend but could only use one per transaction and one per item, so rather than buying something worth a pound or two with each one thought I might as well get full value. Should last a year or two. 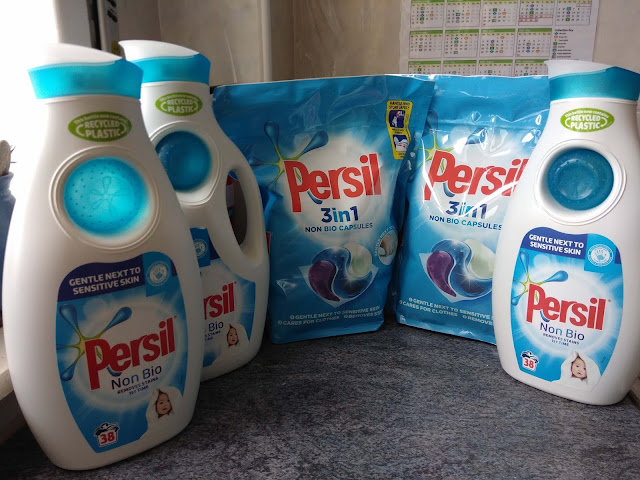 Monday
Housework and washing done and started a new crochet piece, a rainbow otter, Bob loves otters. The knitted one was done from a crochet pattern as not sure about adding writing on a piece of crochet work, maybe worth experimenting with at some point, the crochet one is bigger because crochet stitches are bigger.
Watching The Truth about the Harry Quebert Affair. An entertaining series with lots of twists, turns and red herrings.
An evening walk with the dog down the woods and spotted this dinosaur head. 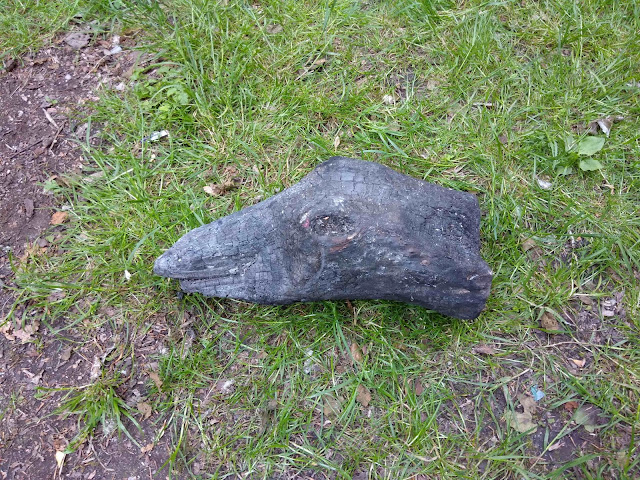 Tuesday
Car was going in for its MOT today with a time of “drop it off early and we will get to it”.  Hubby and dog came as well and we walked round the village while we were out.

Walked back down with dog and hubby to pick the car back up again.
DD1 and the children were out in the garden when we walked by and they were all very excited to see Dixie dog.
Finished off knitting the otter.
A very muggy cloudy day but still very very warm, 22.5 according to the car. 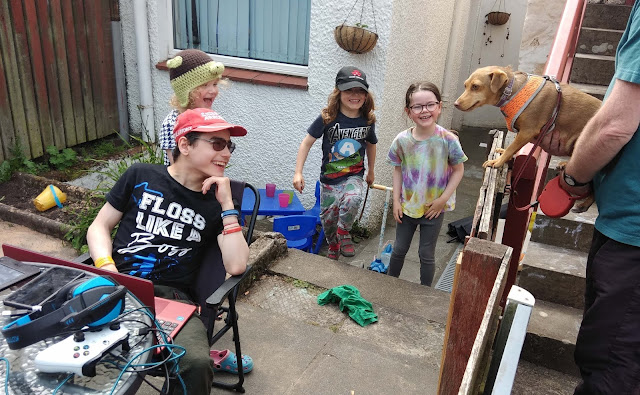 Wednesday
I am getting very can’t be bothered, do it later but later never comes mind set lately. Happy to spend my days crafting. Finished the otter off. Finished watching Harry Quebert and spent three hours listening to the end of Good Little liars on audiobook while doing Bob’s diamond painting.
Met up with DD3 to go for a walk with the dog along the river in Ayr, first time I have seen her in about ten weeks.
Drove past McD’s on the way to meeting her and the queue was stupidly long, they have set up cones etc to make a snaking queue. You could have been to the supermarket next door and bought your ingredients and then driven home and made them quicker.

Spotted this algae in the river that looks like a map of the UK. 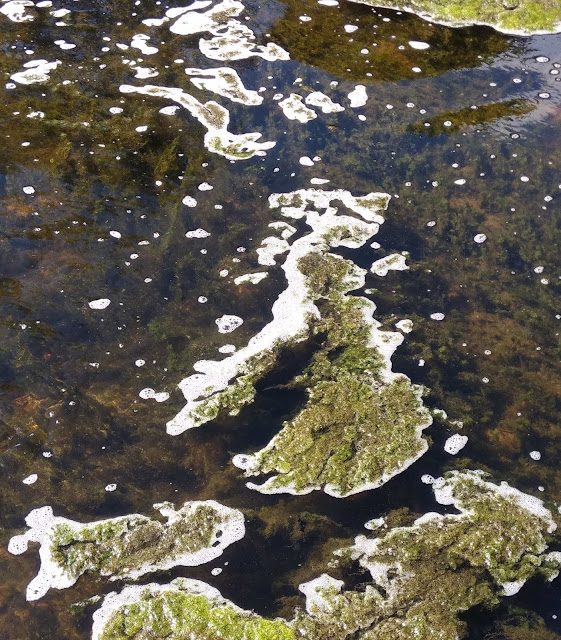 Some house work, some blogging comments and then a new audio book and more diamond art. Spent the morning waiting on the rain that never came to anything other than a few spits.

Went and did three miles along the River Ayr, not been there since the lock down started. It is only a couple of miles away but no reason to be there.

Started a crochet unicorn for Dinky to go with her rainbow doll after tea. 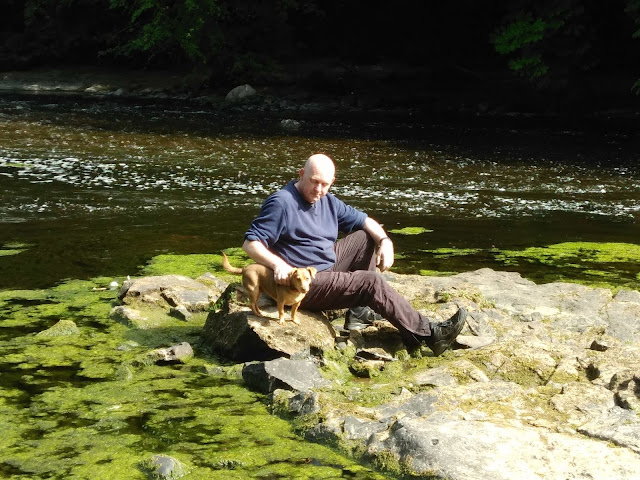 Went early and did a shopping as the industrial estate shares the same roundabout as the recycling centre and KFC so would expect long queues later in the day. Choose Food Warehouse as they are doing 20% off this week for NHS staff. Object to this in principal as there are many key worker groups not just the NHS as we in theory are no poorer now than any other time of the year, but a saving is a saving.

I rarely before last month buy frozen pre made food but have to say I can see the appeal of" take it out the freezer and throw it in the oven thinking", no mess no prep time and no clearing up afterwards. So mixing it this month with some cook from scratch and some throw it in the oven food. Frozen foods have become much better quality over the decades than it use to be, better quality meat, less fillers, additives or other junk added so probably not a bad alternative any way.

Popped into DD1 on the way home as I had added a few bits to her home delivery and dropped her off some eggs I picked her up. home by 9.30 am. Worked on the unicorn, now finished apart from the tail needs puffing out. Chosen my next make for Minky which will get started over the weekend.

Put a washing out as the promised rain was not on the horizon and took the dog for a walk. Started spitting just before we got back but managed to catch the washing in time. Only rained for ten mins but was heavy so washing would have got soaked. Weather was freezing and I am glad I pout a wind proof jacket on.
Cooked a nice roast chicken dinner and made a pear upside down cake. 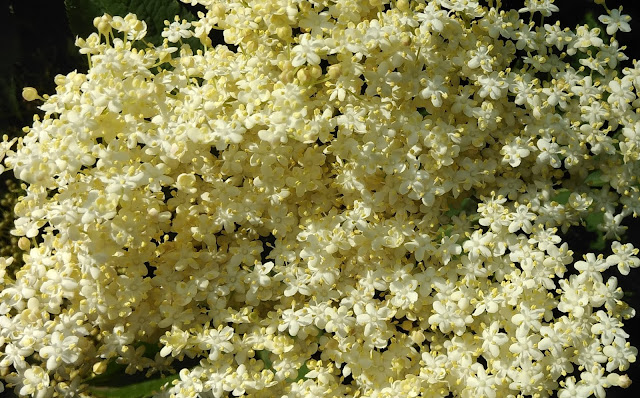 Saturday
Blogging and then diamond painting for an hour before getting ready for work, nice to have somewhere specific to go. They have another type of mask for me to try but asked for a break this week as it is taking longer and longer to feel normal again, was still feeling the effects of last weekend on Thursday this week. Pushing my IGE levels up and not giving it a change to even out again means I am having issues with things I would not normally at home so having to adjust what I eat/drink/do to save making myself uncomfortable.

This is my mileage until the end of May - 789 miles so far this year. 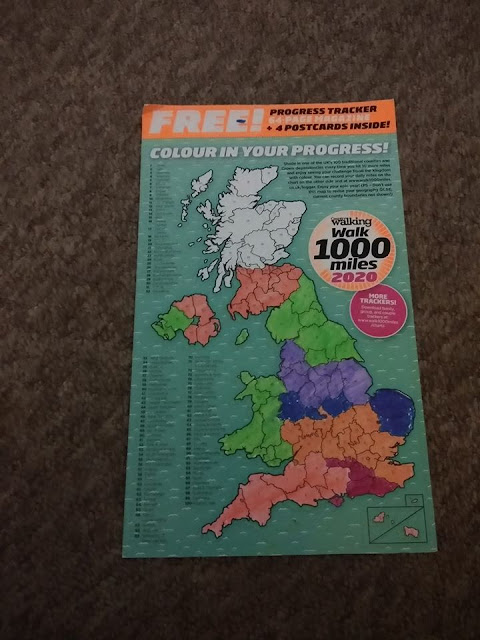 I am on holiday next weekend and normally we would be off to Oban for a week with DD2 and the girls, but not this year.

You are invited to the Inlinkz link party!
Click here to enter
Posted by fun as a gran at 21:58