A day out at The Scottish AirShow 15

There are many advantages to living in such a beautiful part of the world, one of those advantages is being near an airport and getting to watch The Scottish Air show which came to our area earlier this month.

Daughter No 3 ( H) and SIL (M) had promised Bob and Fifi they would take them along with their other nephew K. So we were meeting up with the later in the day as we were going in early to watch the storming of the beach. Sadly for security purposes this had been scaled back and was not as impressive as we had hoped for. Had a commentary throughout which was handy but was quite difficult to see what was happening behind the fence that made the enemy compound.

So after the storming was over we headed back to where all the stalls were to have a look. The show has grown massively from last year, this is the second year it has been back in the area, they estimate 50,000 attended last year with 120,000 this year. Both years we have been blessed with good weather and blue skies. There was a huge amount of stalls to wander round with not enough time to see everything.

I took some random photos of things that appealed.


At this point we wandered back to the car to grab some lunch that we brought with us. We are lucky to have access to a garage just round the corner from the Low Green.

Whilst we were eating lunch H phoned to say they had arrived, so we went across to meet them.
Bob and K were having their faces painted when there was an impromptu flyby display.


At this point we decided to wander down and watch the first half of the Air Show and stopped to let the children onto various things.

I appreciate that the aeroplane pictures are not the best, I have an £80 point and shoot, so time I found the planes, pointed, focused and clicked they had moved. But will give you an idea of the variety of planes to be seen, and the pictures may not be good but the memories are. 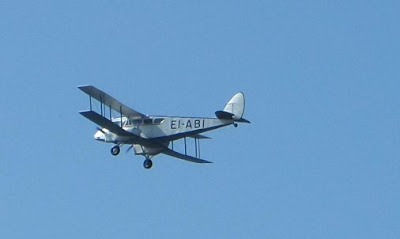 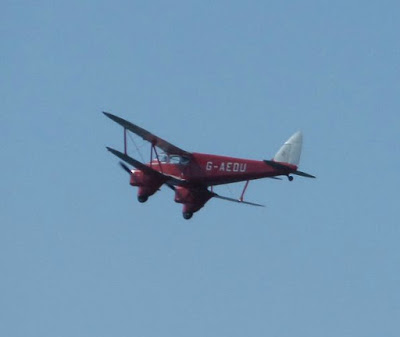 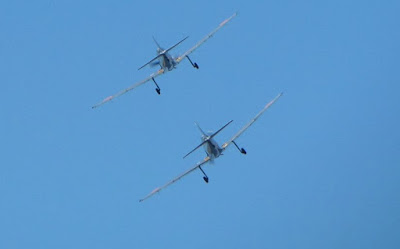 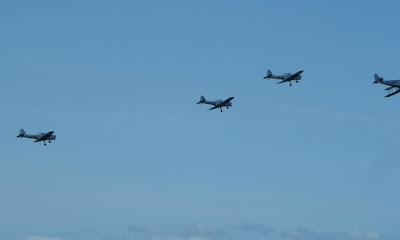 So once part one was over H took Fifi back to get her face painted while David, M and I took the boys to see other things to play on. Sadly, as is to be expected, there were huge queues for most things.

So it was soon time to head back for the second part of the air show. The children had begun to bore with the planes, after all they do live under the flight path and see planes on a daily basis and don't see the interest, so we decided to wander down the beach to stand so that they could play.


K had not wanted to eat his lunch when the rest of them did, so he ate his down here on the beach. H was teaching him about Bob and his food issues and made sure he ate well away from Bob. For all what he was eating was not an issue it is something he will have to learn about as he gets older.

This is a Vulcan. Today was the last ever Scottish Air Show it will fly at as it is retiring at the end of the year. But it had an issue and had to do an emergency landing at the airport. The landing wheels had become stuck. Thankfully all went well and pilot and plane were safe. You can read about it here. This caused a slight delay in the programme but was unavoidable. So not the best picture but a piece of history.


The highlight of the day for me had to be the Red Arrows. Last year they were cancelled due to weather conditions else where in Britain and they could not get airborne. Their displays are just amazing and for all you know two planes are not going to hit head on your still expecting the bang.

I wonder how you train to be that good. I mean these planes fly at time approx six feet apart. There is no error in training to be off your line. All you have to do is sneeze to cause a major accident.

Not a lot of pictures of these as I was too busy enjoying the display to want to take pictures.

So the Red Arrows was the finale and we headed back to the car. Have to say traffic logistics were much better dealt  with this year, last year they had not expected so many people and Ayr became gridlocked for a few hours after the show finished. This year was much better.

Scotrail tweeted they had brought in 11,000 people to the event, and when we drove back past the station the queues were very long but passengers were tweeting how quickly they got on trains and were under way for the journey home.

This is a totally free event but takes a lot of money to put on. The Scottish Airshow page tells us

So if you went this year or fancy going next year why not give them a £ or 2. 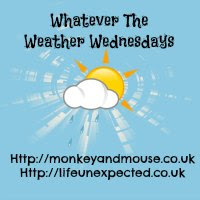 Email ThisBlogThis!Share to TwitterShare to FacebookShare to Pinterest
Labels: #ScottishAirshow15. Ayr, day out, free day out, red arrows, The Vulcan