Debated over joining in this year, but have to say I not only enjoy sharing our ups and downs but reading other peoples. I thought with a new grandchild due next month it would be a shame not to allow her young life to be on here for her to look back on just as the gruesome twosome have been followed.

So here we have it - year five of the project.

Went for a cold, blowy, but dry walk along the beach to blow away the cobwebs, it certainly did that all right. Somebody had written this message in the sand, and so I decided to share it with you. 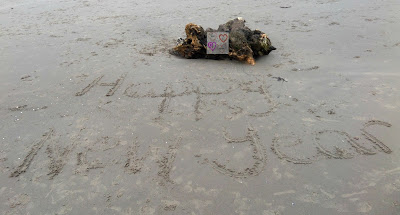 Had been at the GP on Thursday as I am finding myself hoarse a lot of the time but my throat is not actually sore. I feel it may be catarrh as I blow my nose upwards of twenty times a day, so I got some steroid drops to use for six weeks and see if it makes a difference, I also mentioned a few other issues I have and so he wants to do some fasting blood tests, so have an appointment with the practise nurse for them at the end of the month.

I often find when sat on my laptop my ankles get cold, so how lovely is this, a pressie from a friend. It is great and makes a difference, a slipper for two feet at once. 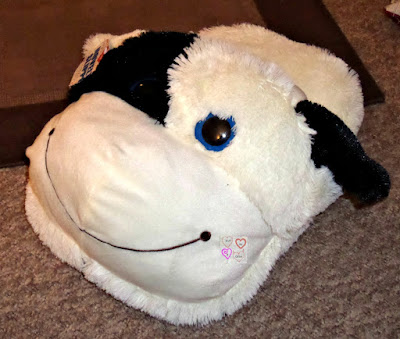 Driving back into the village and I spotted a fab sunset in my mirrors. Stopped in the layby and took this picture. 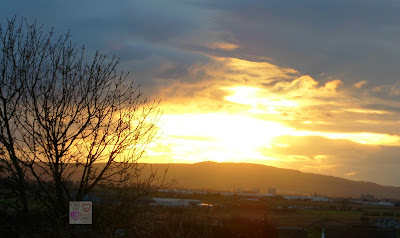 Have decided that I need to do something about the fact I am putting on weight. Did a post on it here, but here is a start. A gentle start but considering my age and weight probably a sensible start. Struggled at eight minutes in but was fine by twelve minutes. Hoping to improve and work up to  harder workouts. 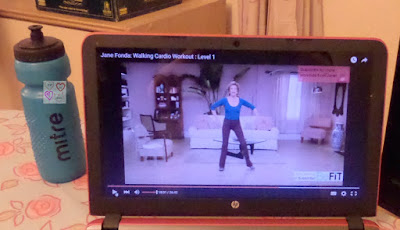 Went for a walk along the river. Hubby is down photographing the waterfalls. 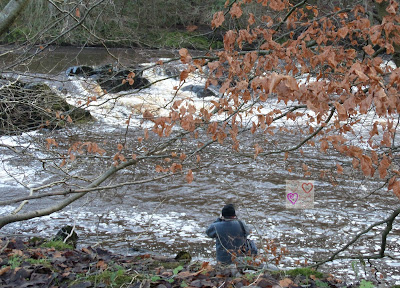 Went round to see the twins and keep their other Gran company while daughter was out. There was lots of giggling going on with lots of silliness. The two of them play well together. 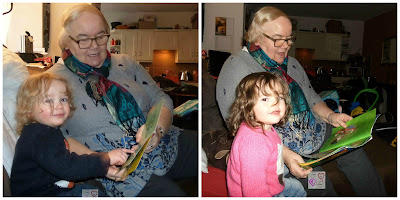 It has snowed here and by golly has it created merry hell. People stuck in traffic jams for hours, no way out and no way round. It normally takes me twenty minutes in heavy traffic to get home. Took over two hrs today. There are three sensible ways into the village, my normal route, the back route and the long route. Short route shut off with a police accident sign, so I diverted round to the back way, got about three miles to get stopped and turned round again. So back to the bypass for the long route home, the snow was much heavier at this point. Stopped to phone hubby and let him know what was happening, and then carried on for another two miles on a horrible slippery snow covered road, only to get turned round here and sent back the way we had come. A sign post at the far end would have been nice. Problem is our village is quite high, surrounded by roads that are even higher, and it makes access difficult. The fourth unrealistic route in was gridlocked and no traffic moving so I phoned my pal to see if I could come and sit at hers until the roads opened, but luckily time I passed the first road again it was open. Sensibly enough I have spare jackets and waterproof trousers in the car as well as hat and gloves and food and water so just such an emergency.
When I took this picture I was stopped and awaiting my turn to be turned round.

Where we live is not on the bus route and there is no way with the amount of snow in Ayrshire the gritters were getting anywhere near our street. It has frozen overnight the street will be impossible to get  out of, so I have left my car at DD1 door and planned on putting these on to make walking down the hill to it safer.