Our week on the Isle of Seil.

Last week we were due to go on holiday when the place we were suppose to be going to stay could no longer accommodate our dog and so we had to find alternative accommodation. As it was in Oban, a busy place with all the tourists at this time of year finding an alternative was difficult. But we managed to find a small cottage sixteen miles outside Oban, a small village called Ellenabeich on the Isle of Seil, a very small place with no mobile phone signal but amazing scenery.

Thought I would share my holiday with you in case you are ever looking for somewhere to stay.

Seil is one of the slate islands, and has been linked to the Scottish mainland since 1792 when the Clachan Bridge was built by engineer Robert Mylne. Also known as the "Bridge Over the Atlantic", the bridge is still used today and in early summer is covered in fairy foxgloves (Erinus alpinus).

Balvicar, in the centre of the island, is the main settlement with a flourishing fishing industry, the island shop, and a high percentage of houses that are occupied all year round. At the end of the road lies the former slate-mining village of Ellenabeich. This picturesque village is a conservation area with a high percentage of holiday cottages and is fully occupied only in the summer months. Parts of Ring of Bright Water were filmed here. The Ellenabeich Heritage Centre which opened in 2000, is run by the Scottish Slate Islands Trust. Located in a former slate quarry-worker's cottage, the centre has displays on life in the 19th century, slate quarrying and the local flora, fauna and geology.[6] Ferries sail from Ellenabeich to Easdale, and from Cuan on the island to Luing. The mother of Princess Diana, Frances Shand Kydd, lived there until her death in 2004.


or more commonly known as the bridge over the Atlantic. It is a scary bridge to drive over as at the top as you go over the hump you can no longer see the road, only the sky is visible for a second.

From the middle of the bridge you can see as far as the Atlantic which flows inland under the bridge, hence the nick name. 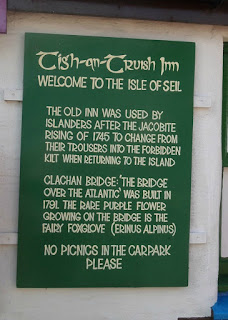 Just over the bridge and on the Isle is the Tigh an Truish inn, it translates as "House of the Trousers" as during the Jacobite rising of 1745 the kilt was banned, so the islanders would change into trousers before crossing the bridge to the mainland.

There are two small shops at the bridge as well. The shops have no staff, both have an honesty bowl and a sign saying it is self service.


So as we were parked up in the car park at the bridge we decided to follow one of the sign posted walks and see the views.


There is a cache available here, but only when the tide is out when the water is low enough to get to the island.

Loved the old boat that is lying grounded.

and the views are just stunning.


So we moved further inland to see the church. I love old churches, sadly this one did not have a graveyard. 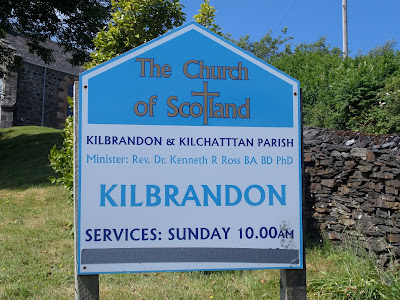 Internally the church is an attractive mix of grey stone, red carpet and a mid-toned wood, which extends to the panel in front of the gallery at the west end.
But what really sets Kilbrandon and Kilchattan Parish Church apart is its superb collection of five stained glass windows. These were the work of Dr Douglas Strachan and were presented to the church in 1938 in memory of the Marchioness of Breadalbane.
Each of the windows illustrates a scene from the Bible, mostly the New Testament, and mostly from around the Sea of Galilee, making them very appropriate for an island parish.


The church has a key in the door and people are welcome to drop in any time they want.

I loved the stained glass windows.


There is a dvd that you can watch and it gives you a good history of the Isle. 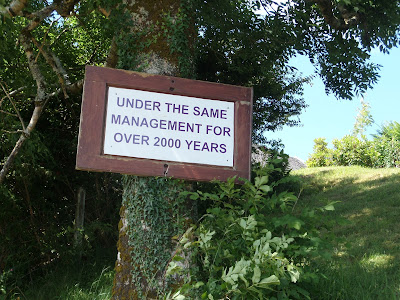 and the view from the church was amazing.


We stayed in one of the larger villages. Ellenabeich. It has a Highland Arts Exhibition shop, a Seafari shop to book tours


Daily departures from the conservation village of Easdale just south of Oban to the World's Third Largest Whirlpool, The Corryvreckan. Whales, dolphins, porpoise, otter, seals, eagles and deer regularly seen by our customers.Day tours to Iona, Staffa and the Puffin colony. Whale watching during June, July and August.

A Slate Heritage Centre explains the history of the area. It shows how the Isle came to be due to the slate that makes up the islands.

The crane used to sit on a pier in between the two slate islands but the weather has made the pier unsafe and so this piece of history was brought ashore and refurbished and put on display.


Lastly there is one pub, The Oyster Brewery Bar and Restaurant, which serves meals between 12 and 2pm and 6-8pm. This is about typical for the area where everything moves at a very slow pace of life. The pub was shut by about 9am every night we were there. The meals were lovely though it is recommended that you book a table as it is only a small pub. The pub offers free WiFi, well nearly free, they ask for a donation for the RNLI in return for the password.


The holiday was great. Very relaxing, plenty of time to read and sew and listen to audio books.

Going to do a separate post on the views from Ellenabeich and Easdale, they were stunning.

Email ThisBlogThis!Share to TwitterShare to FacebookShare to Pinterest
Labels: Bridge over the Atlantic, Clachan bridge, Easdale, Ellenabeich, Isle of Seil