A rather cute Spud in her Zebra babygro

A lot of Citroen Dolly cars and French speaking people down the beach today.

Going away on holiday on Thursday, lots of planning being done first. Mapping geocaches and places of interest. Hubby decided the alloys needed cleaning.

We went to meet up with a friend to walk Lilly with her dogs, lets just say we were so close to diverting into the SSPCA on the way past to drop her back off. Change of plan for the holiday, now going on Friday to somewhere we will have no internet connection. Had to change plans so have downloaded some books and audio books as well as some tv episodes onto my kindle.

Took the twins to the park today and as mummy was busy we took Spud as well. We have to cross the main road in the village to get to the park, so the twins are attached to the pram by wrist straps. No chance for them to dash away. They know this happens and are quite happy to get attached.


Off on holiday. Stopped at various places on the way. one place being Inverary Castle. Here is Lilly looking through the bridge at the sheep in the field. We were staying at Ellenabeich on the Isle of Seil

A glorious day. In the morning we went up the hills at the back. There is a cache up there as well as a phone signal if you climb high enough. DD2 and SIL came over for the afternoon  and we went across to Easdale Island,  home of the world stone skimming championships. Thought I would share a 360 degree view with you. I went up here for a cache, and got a phone signal as well.
Had a very nice lunch in the local pub.

We had some over night rain and the day started out dull and windy. Went to DD2 house for some lunch.  Daughter was showing me all her baby stuff. She has a lot of beautiful hand knitted items from a relative on SIL side. The furniture is built up and the room painted and re-carpeted all ready. Love the Moses basket, it was bought for SIL as a baby and was used for his sister as well as her children, Now the heirloom is awaiting the birth of Ziggy.

We went for a walk to Dunollie Castle and stopped at the lighthouse to pick up a cache.

A wind and high tide made for some nice photos on our morning beach walk. I call it a beach but as it is part of the slate islands then it is slate not sand, but the dog loved rooting for crabs and sea lice, We then headed to the nearby village to buy a few bits in the shop and have a walk along the other side of the island.

We decided today to leave Lilly at the cottage and go and do some sight seeing. We went to Carnasserie Castle  and then onto Kilmartin


The village sits at the heart of Kilmartin Glen, and there are over eight hundred ancient monuments to be found within six miles of it. These include burial cairns, rock carvings, and standing stones, as well as the remains of the fortress at Dunadd. Kilmartin seems a surprisingly small place to be carrying such a weight of history.

Went into Oban to spend the day with DD2. We went down for lunch first leaving Lilly in her cage at daughters house and then we went and did a bit of shopping.  Could not resist this, and bought it for Ziggy after daughter promising me he/she would wear it as DD2 is not a lover of Pooh Bear. So far it is the only thing I have bought.

Another glorious day, our last full day on the Isle and so we decided to go and explore some more of what it has to offer. Parked up and the Atlantic Bridge and took a sign posted walk. Then went and stopped off at an old church. I love old churches, sadly no graveyard at it.
Back home for some lunch and then off across to see the rest of Easdale. Easdale is a vehicle free Isle and is only accessible by boat, so we took over the wee boat. Tesco deliver as far as the ferry point, and the islanders come over the meet the van and get their shopping. When they get off the boat they unload onto the slip way and then use fetch their wheel barrow to carry the shopping the short distance home.

Sadly the week is over. Have to say it has been nice. plenty of time to chill, done a fair amount of cross stitching on Ziggy's blanket, read a few books and listened to some audio books as well. I tapped into the wi-fi in the local shop a couple of times. The pub also have free wi-fi in return for a donation to the RNLI, and the church we visited had it available ( not that we used that). No phone signal unless you climbed up the hills and got in line with the mast on Mull. A nice place to visit but would not fancy the eight miles of single track roads with passing places every day, but a nice place to retire to.

The Isle has more snails than I have every seen before. The whole isle is built on and with slate. The cottages, the walls, the beaches are all slate, and they seem to live in all the gaps.  At night fall they seem to come out in their hundreds. I liked the colour of this one on the beach this morning. 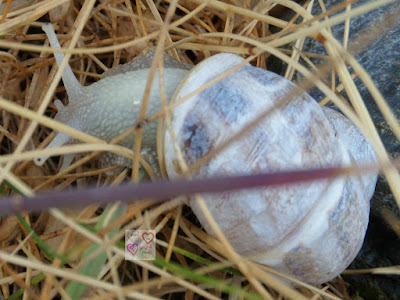 Brought the grandchildren home a pressie each. Stopped here as we fancied the guided tour but they do not allow dogs on the tour and was far to warm to leave her in the car.


Lots and lots of other pictures to edit and share at some point.