Well having the pain under control and sleeping at night I felt well enough to go back to work yesterday. Had support in place and was not stressed and not really sure what happened or why but last night my body rebelled big time. I ached from top to toe not just the lower arms and hands like a month ago but every part of me was on fire. Lower arms, hands, upper arms, shoulders, back, right ankle and knee, toes everything was cramping up and going numb, pins and needles and shooting pains like I have never felt before. The pain woke me at midnight and I could not get back to sleep. Nothing worked to calm it down and by the morning I was exhausted. I went into work but got sent home again.
Spent all day in so much pain, I just wanted to sleep but there was no chance of that.


I even tried the tens machine a dozen times over night and during the day but it was not cutting it either. 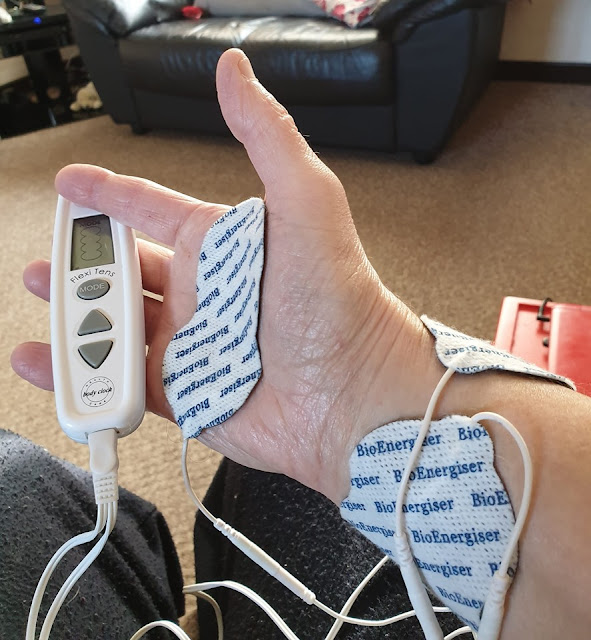 Phoned and made a GP appointment. This time I went in with a list of "what I wanted him to do" after I had explained all that had happened. So he agreed to wean me off the amitriptyline and wean me onto gabapentin, it works on the nerves just the same and is suppose to stop the nerve pain reaching the brain. Also taking high dose painkillers which seem to be doing nothing. He also agree to refer me to neurology. Sadly it could be months before I am seen.
DD3 has said she has gone private before for a consultation and then the consultant had shunted her across to the NHS for treatment so I ran this idea by the GP as well but he informed me neurology do not work that way and any scans etc I might need would also have to be paid for privately. Right now I would do anything not to be on this pain especially at night. Spoke to the local private hospital and the consultation plus MRI would be on the region of £2000. Believe me would be worth every penny if I had it.

Saw a fellow comper on Facebook was looking to start doing cross stitching as a challenge and she was looking for a hoop. I have a few but never worked out how to use them, so I made her up a package of a hoop and some bits and pieces and paid it forward to her. 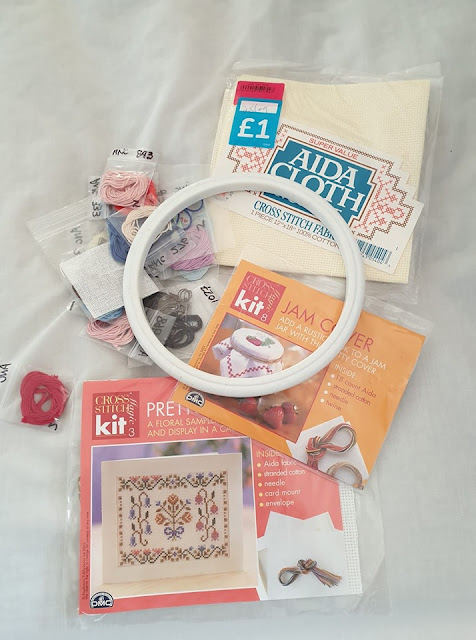 Another night with less than two hours sleep. A friend of mine suggested a soak in a hot bath, sadly I don't have a bath so she offered me hers. So I took her up on her offer. Went for a nice long soak in her bath today. Left her a wee thank you. 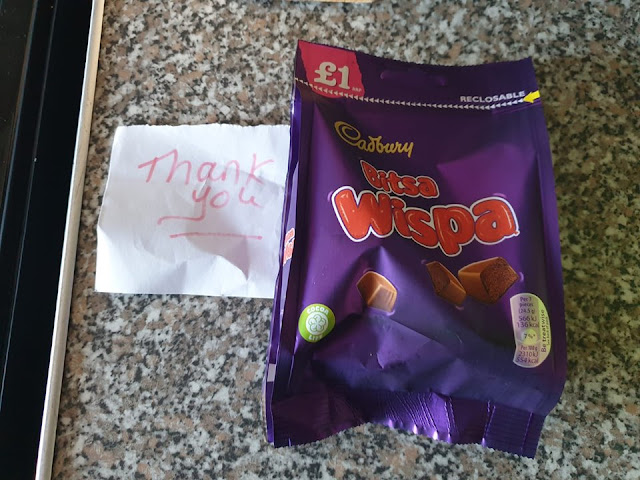 So fed up of the pain. Could not get the GP I had been seeing on the phone so dropped in a note as had to go shopping anyway. Need to try and work out how I get from where I am to where I need to be without spending months on high doses of addictive pain killers being unable to lead any sort of life. Shopped and walked the dog.
There are times I wish I was a waccy baccy smoker or a drinker but I'm not.

Hubby found this tiny snail, his body is see through. Did take photos of him on hubby's finger nail but they were all blurry. 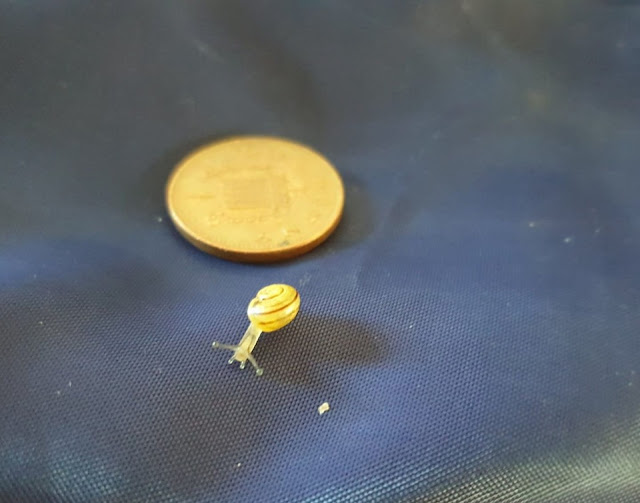 Went back to a different GP, he had phoned and asked to see me after the note I dropped in. Trying to explain to me various things and why I cannot be referred to more than one specialist at a time, why he cannot send me for an MRI or nerve conductive tests as only a specialist can order them. My issue here is I wait X amount of months for neurology and they decide that is not my issue, and that specialist suggests it may be something else and I need to see another specialist and then have to wait months on that one.
I see where he is coming from but I just feel frustrated at this.

Walked the dog after that appointment, the reflection was lovely on the river.  Bought a spot of lunch before heading off for my occupational health appointment. He had hoped, as had I, that it had all settled down and I was better.
But he is trying to get me pushed up the waiting list by getting them to offer me a last minute cancellation. He is also going to see if some of the tests  that will be performed can be done while I am waiting on my appointment with the specialist. It is in his interest to get me back to work as quickly as possible and mine as well. 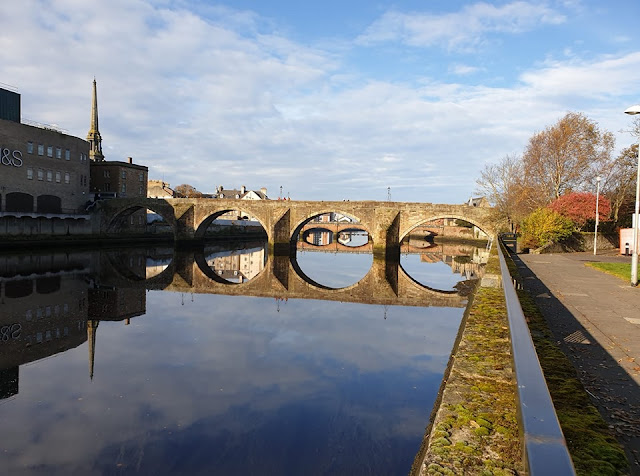 Another night of no sleep. The only thing that offers me any relief with my arm is walking. When ever I sit or lie down the pins and needles start from the fingers and move up to my shoulder and my whole arm is in such intense pain, reminds me of the trapped nerve I had a few years back except there was no respite from that. But if I get up and walk for approx 15 mins while rubbing my hand and arm it dies down....then builds back up over about half an hour....and so on it goes.

Bob wants a sewing machine for Christmas, but there is nowhere in his house that has space for one. So he asked if he could come and use mine. Hubby got it out the loft for him and threw some pieces of material down along with the cutting board and cutter. I advised him to start with 4-6 inch squares to practise sewing, but he cut 2 inch ones which were more difficult to work with. 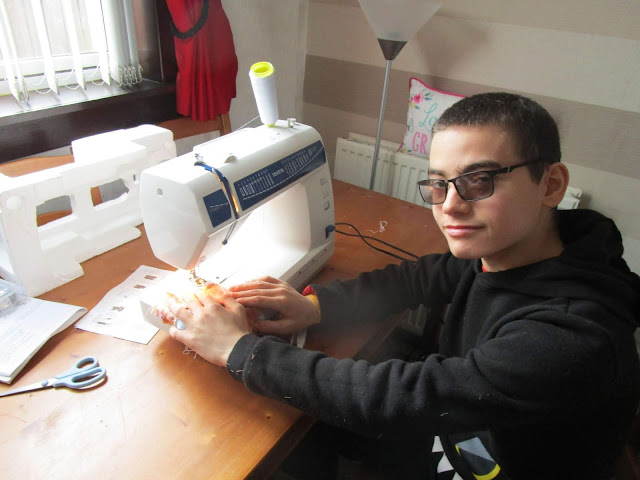 We finished watching Beyond on Netflix. Been left open for series 3.

Spent the night watching a series called the village on Netflix, based on a boys memories from 1914.

Had a parcel to post and needed to go to the chemist so combined the two with a dog walk. Spotted this bird nest in a electricity generator. 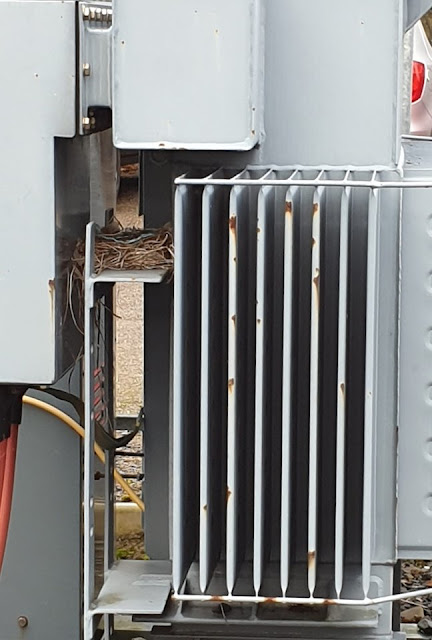 
You are invited to the Inlinkz link party!
Click here to enter
Posted by fun as a gran at 19:53