I will do my annual introduction for any new members.

I have three daughters who feature on the blog and two sons who choose not to.
DD1 and SIL1 has five children, Fifi is 17, Bob is 13, Minky and Dinky the boy/girl twins are 6 and Spud will be 4 in March. They live just round the corner.
DD2 and SIL2 live approx 120 miles away, they have Ziggy who was 3 in August, and Roo who will be a year old this month.
DD3, Auntie H  lives with Uncle M approx 7 miles away.
We have one rescue dog, Dixie, we have had her two years this month and she has become a delight to have.
When I am not working, babysitting or dog walking I enjoy cross stitching, crochet, knitting and jigsaws as well as adult colouring, geocaching and of course my blog. .


So here we go for year nine of this project.

Going to start the #walk1000miles again as well as using my exercise bike regularly. This years motto is onward and upwards. Started using my arm more in the house for day to day things, feeling more confident on using it in the house as well as carrying light weight shopping when out. Little bits to strengthen it not big bits to push it backwards.

Today we did Christmas day, you can read all about it here.  Lots of fun, laughs, mess, noise and mayhem, just the way a good Christmas day should be. First time I have ever got all seven of them in one picture.


Dinky baked us a beautiful cake. Fifi measured the ingredients and put it on the oven and took it out for her and she did the rest all by herself. It was moist, light, soft and fluffy. Not bad for somebody who has just turned 6.

Hubby took Dixie dog for a walk to escape for a bit. She managed to hurt her leg somehow and came back with a limp.

Watched another episode of Chase The Bloopers, totally hilarious and would highly recommend if you want a good laugh.

DD2, SIL2 and the girls went to visit friends for the day. I hoovered and tidied and did a few miles on my exercise bike.
Took Dixie dog for a short walk round the block but still seems to have a minor limp.

This is the first visit we have had with baby Roo where she has been happy to interact and laugh with us when  her mum has been on the room, or stayed in the room when her mum left. Still not quite crawling but bum shuffling well.

Went out to see Ziggy on her bike. She did really well considering she has only had four outings on the bike since she got it. Sadly where the live there are no pavements, straight out on to roads that are very very steep with cars parked both sides, a nightmare to drive or walk so will need to be put in the car to use at home.
We all sat and watched Tinkerbell.
Got a visit from my ex husband here to see all the grandkids and the girls.
The visitors headed off home once the girls were ready for bed.

aahhhhhhh hear the silence.....last few evenings have been anything but as Ziggy has been away from home for over a week, has been really busy and is well over tired and has been pushing her luck. Took DD2 over an hour last night of putting her back into bed every two minutes while she screamed with temper. Well done to her for persevering, can't change your mind and give in. Laughed as when they got her up this morning she ran back into bed again as she did not want to be up. She is not usually like this.

Also took a major strop as I said no to her getting more white paper to draw on ( need to buy more for the printer) when we have masses of coloured stuff. Such is the joy of three year olds. You love them regardless.

Dixie is still limping on and off  and lifting her back leg and walking on three legs. So going into town for my cheap shopping and doing the vet as the same time. Dixie has a luxating patella,  not much needs to be done about it unless it becomes a major issue. Many animals live with it all their life with no problems, and it is common in small dogs.

Friend often helps with carrying the shopping but he is moving up North at the end of the month so picked up a shopping trolley at a nearby shop while in the area of the recycling centre.
Was a bit peeved we separated out the rubbish  and then got told to put it all in the general waste that goes to landfill. Our bins were full to the top so easier to take it in bulk out of the bin than bit by bit.

Had more rubbish to dump that would not fit in the car yesterday. So decided to head to Troon for a change. To say the least it was very windy. We did the best part of four miles despite the wind. Spotted some wind surfers but did not get a good picture of them as they were well out as it was low tide when we were there. Funny how round one bit of the beach the water was lapping the rocks on shore yet further round it was about a quarter of a mile out.

Way to wet to get hubby and dog out for a walk but did a couple of sessions on my exercise bike.
Started knitting prem baby items for the hospitals again, small things to build the strength back up.
Had some vouchers for a none food shop I won a long while ago. Hubby keeps on about wanting a sausage dog......so I bought him roughly a hundred of them......could make a new film....
No I don't iron bedding hence the wrinkles.

Still being frugal and making the most of what we have along with any bargains that I can pick up. The two blocks of cheese that I picked up for 10p each last week were grated and frozen and so tonight we had macaroni cheese. Added some cheesy breadcrumbs that I made with stale bread and froze as well - a crunchy topping adds a bit of variety and the layer of soft tomatoes saves wasting them.

A run into town to pick up prescriptions get a couple of items we are running short on mainly my yoghurts as nowhere has had them on special for a while. Begrudge the £1.80 for a 500g tub when not that long ago they were nearer the £ mark. So got four while they were on special.

Went for a very cold as well as very windy walk along the beach at Prestwick while we were out anyway. There are a few rows of these brightly coloured benches that were painted by a local dementia group, make a change from the bog standard colour.

The "new" car at the door confused a few people, I told them I had won the lottery....and so I did.....sadly not much change time I bought a second ticket with the winnings. The second one also won two numbers so will change it for a third.....and the third went in the bin.

Another appointment with physio. He is happy everything is still going the right way. Hopefully won't need to see him again, as lovely as he has been, as when I get back to work Staff Support will take over my care. Feels nice to be fully supported by work when off sick.

Did ask about going back out on the bike rides but he says not at the moment. To try my exercise bike and when I can do over half an hour on that with my hands on the handle bars the whole time with no ill effects then I can go back for short rides. I tend to ride indoors without my hands on the handlebars so going to have to start doing hands on.
Also fancied a gym membership now I have turned 60 I get it at half price with the council facilities and they doing half again for six months if joining before the end of the month but that is currently a no go as well. I can use my rucksack as long as the chest strap is done up so will need to be content with walking.

Another walk along the beach. Flat calm seas and lovely blue skies but still chilly at 3 oC 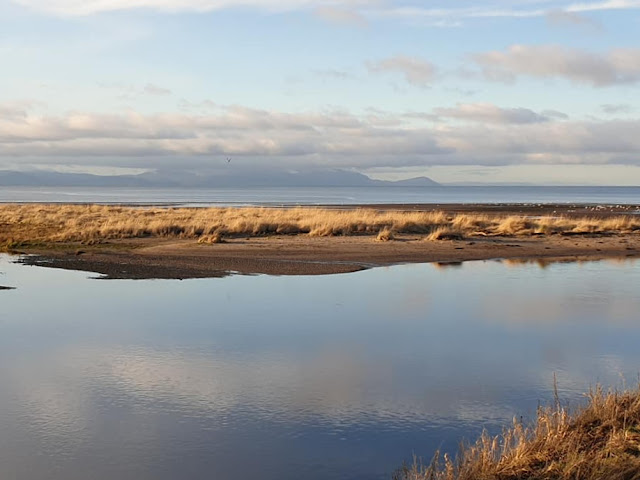 Phoned the garage to see how the car was coming along as courtesy car only booked out originally till today. The parts have been ordered and will be 4-6 weeks before they get them so will be at least the end of the month. The new car is unnerving as it has stop start technology and I was not sure what was happening at first.

Needed a few bits and pieces and was a dry day so decided to take dog a walk and buy what I forgot yesterday, dog food...oops. Round here you have beaches or country parks to walk, I am not complaining, but the country parks tend to be muddy with all this rain so did the beach again. Bad enough we will be handing back a sand filled car let alone a muddy car.

Was no the most pleasant walk, a mere 2.4 miles, with the wind and the exposure but weekend suppose to be worse so making the most of it.

As of tonight I have done 38.04 miles in the first ten days of the year.

A fellow crafting/comping friend from Facebook had this journal but says she will not used it so asked if I would like it, so she posted it to me, will need to mind and pay if forward again during the year.
Laughed to myself as it has space for 42 lots of wool you may have....think for my stash 420 is more like it. I particularly like the square boxes for you own designs.


You are invited to the Inlinkz link party!
Click here to enter
Posted by fun as a gran at 10:17