Not quite sure where this week has gone, I am sure yesterday was Sunday, but all of a sudden it is Friday evening.

Quite a bit of this week has been sorting out the bathroom. We decided a few weeks back to change the shower screen on our shower and tile the floor, well boy how this has escalated. Turns out our shower is imperial and modern screens are metric so they wont fit. So we decided on a new cubicle. But need somebody to fit it. So he suggested wet wall boards, I have never heard of them, we were just going to re- grout again....and as the shower has to come off the wall to fit the wall boards and the current shower has been in for more than seven years makes sense to change that as well. So one new bathroom coming up.

A day at work and then finished Anna tonight. Not a lover of crochet takes me way to long to achieve the end results but am pleased with it. It is for Ziggy's birthday so now been posted. 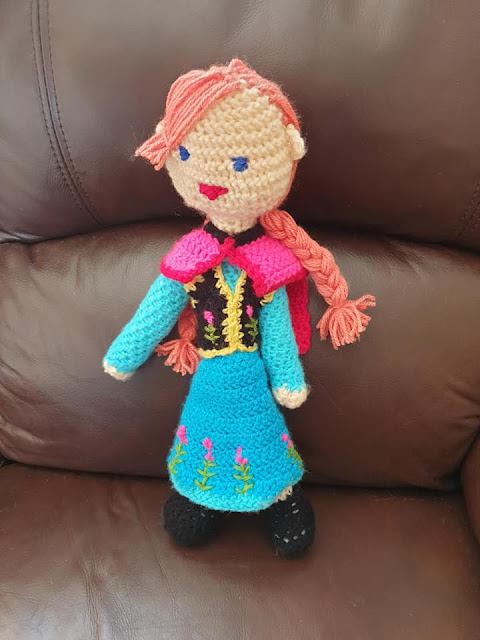 Went into town to help out a friend, took a bit longer than I expected. Time I stopped off for a few bits of shopping and got home it was 5pm. popped the tea in the oven, ate and headed back out for just after 6. Took the dog for a walk and then went and picked up this pine chest of drawers.

Been looking for a set for the front bedroom for a number of years but time hubby sees them on FB Marketplace they are usually gone. But got in first this time. We had a dresser in there we brought from mum's house when we cleared it out eighteen years ago, has served it's purpose and is now getting rehomed. Would have shared it with you but not had time to deal with the stuff that came out of the old one so rather messy up there, maybe next week.

This is the last of the two rhubarb crumbles from Friday. 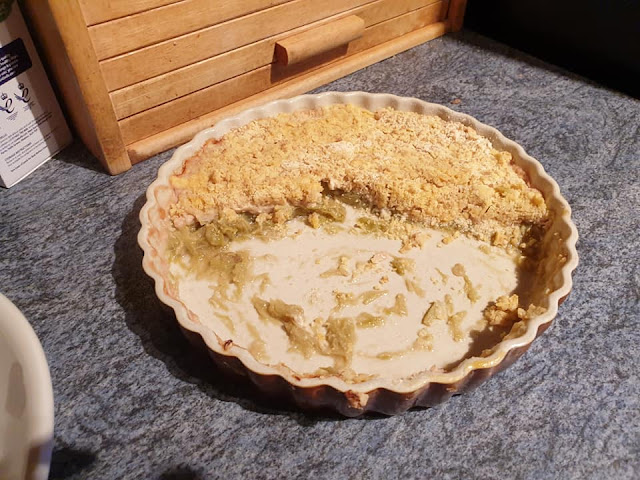 Actually found time to go and do a bike ride in the afternoon. Only 10 miles but that at the moment is far enough up and down the hills.

We had a visit from the hedgehog again about 10 tonight. 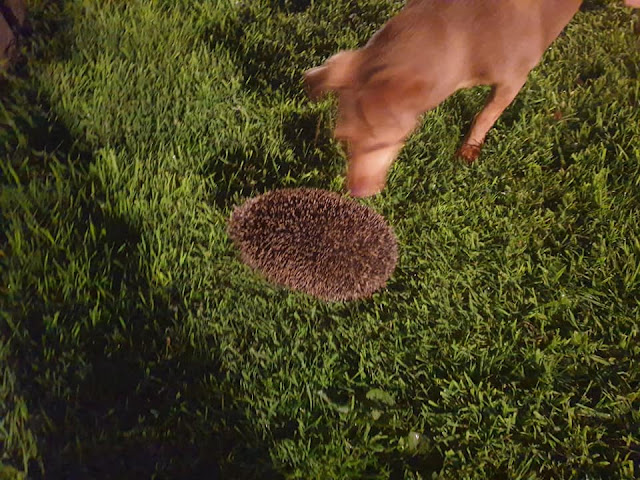 Had a couple of forms to fill in, expected it to take me an hour or so......4 hrs later I am still adjusting it and rewriting it. Stopped off for a run to the dump as hubby been tidying the shed out.

Went back to the forms for another hour. Then had a zoom meet with Active Travel hub. They are hoping to get back to outdoor volunteer sessions soon.

Hubby has been boxing in the pipes in the bathroom, cant do any more now until the tiling is done. 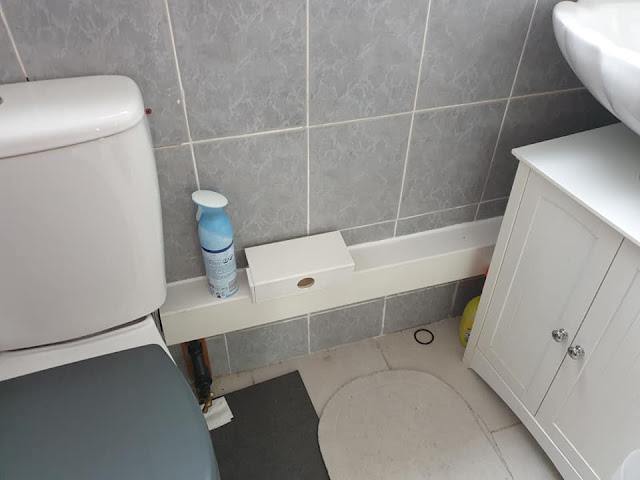 Finished filling in the forms and emailed them away.

DD3 had picked up a trampoline for DD2 a few weeks back. DD2 thought we could take it to Oban with us when we went but was way to big to fit in with everything else. So I got the task of taking it back to the shop. While we were there we went into the wet wall panel shop to have a look what they are all about. Can see the appeal so we picked up some samples to try out against the tiles. Have to say the man in the shop was pleasant, informative and happy to spend time converting us oldies.

Walked the dog while we were in town anyway. This wishing tree says to write your wish on a ribbon and tie it to the tree. 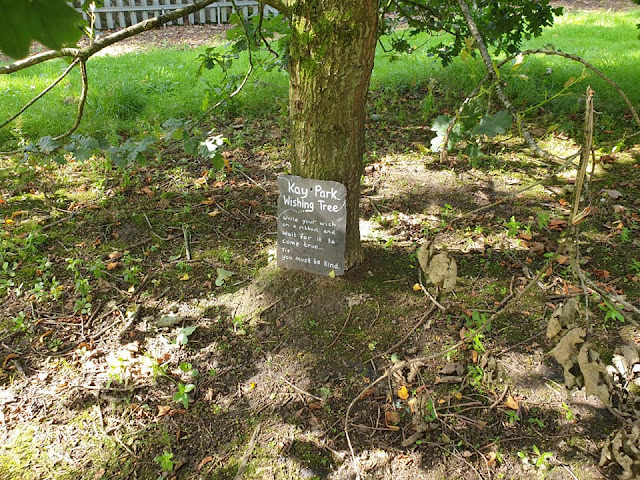 Went out for nearly 11 miles on the bike. Glad I took my waterproof's with me.

Decided to go and buy the wall panels, tossed up between two colours but one was out of stock so that solved that problem. Were not going to fit in the car so had to opt for a delivery. So far the only thing we have paid postage on. The shower cubicle was £50 cheaper on Amazon than on the manufacturers website and had free p&p as well so that was a good win.

How uncomfortable does this dog look? 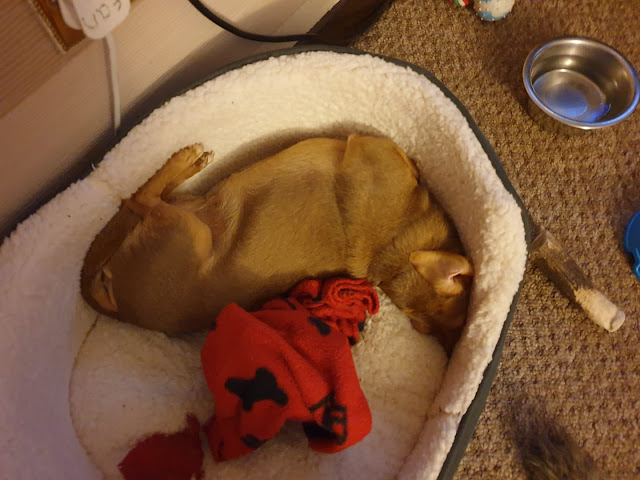 The wall panels we ordered yesterday turned up later on during the day yesterday as the delivery driver was in Ayrshire anyway.

This picture was taken yesterday before we took them upstairs for storage until such time as we need them. Says to store flat so they are now in the back bedroom half under the single bed and sticking into the middle of the floor. 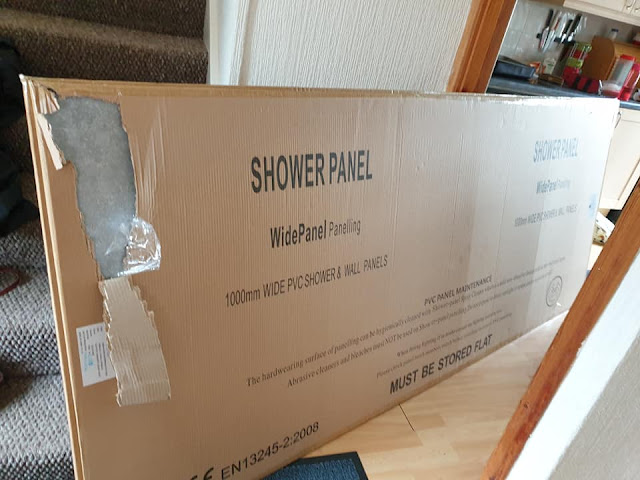