allotment update for end May

Well its been rather a wash out of a month, apart from the 31st May there has not been one day in May that it has not rained. Now I know a lot of you are thinking " we want some rain" but it has meant it has been impossible to get much done at all.

We were still getting a lot of heavy frosts at the start of the month, down to minus 4 and 5 most nights for the first 2 weeks, which did not help the plants that were out in the garden, yes I know it was early and cold but if you see http://fun-as-a-gran.blogspot.com/2011/04/fresh-veg-2011-april-post-2.html you will understand why they are out.

So at this stage my potatoes are doing well,

The lettuce seems to be doing well, and the giant red mustard is also coming on fine, the rocket and carrots have not died but have not grown much either, but we have had few days with temperatures above 16oc so not really surprising. 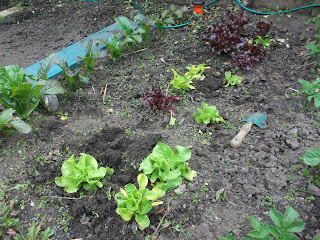 
and the gaps are where we took out the cabbage and cauliflowers which have just died.


We notified Rocket Gardens about the issue, and as promised they are going to sent out replacement plants, told them what has died so assuming they will just replace them rather than sending out a whole pack, so will do some replanting next week when they come.

We had put a watering system into place, with 2 hoses and 3 sprinklers, so we just need to turn on the hose and get the old couple in the house to turn it off, saves standing for an hour watering, fine when its your own garden but not so fine when it somebody elses.  We did not actually need it last month at all, but if it doesnt rain today then I guess we will need to go try it out.
Posted by fun as a gran at 08:24