I listen to my local radio station Westsound Radio, and this week they have been running a competition for ten people to win £100 in vouchers, two people a day every day this week, as usual they were fairly easy questions to answer, so I have phoned hoping to win, but could barely get a ringing tone. But lo and behold this morning i got through. Now the DJ Kenny must have thought I was a right idiot, cos I thought he was taking names and numbers to out in a hat to pick out a winner, and it took thirty seconds for the penny to drop that I had actually won, and the vouchers were mine!! wah-hey!!.

So I had things to do this morning so after lunch hubby and I headed off to The Global Continental Market at Kilmarnock, to meet up with daughter No.1 pick up my vouchers and do some shopping. The sun was splitting the trees and the weather is the nicest we have had all year so it was a lovely afternoon for a potter around. 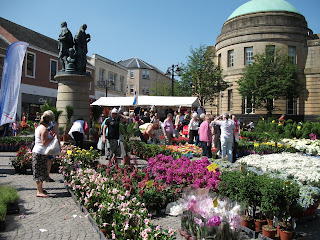 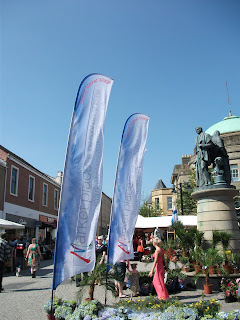 Now I don't know about you, but my budget leaves a lot to be desired and suddenly to find myself with £100 to spend on what I wanted was actually very difficult. Should I fritter it away on lovely things or spend it on sensible things, or blow it all on one big thing?? Oh decisions decisions..lol 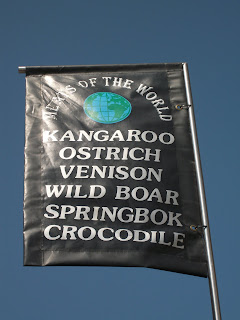 We took our time and walked all the way round the market to size it up first and see all there was to see before we made any rash choices. There were stalls selling plants and flowers, to sweeties and cheeses, meat and cakes, jumpers, slippers, jewellery, hand made items and as it the title suggests stuff from all around the world. Our first stop was at a hot take away stall as daughter and I had had no lunch and were starving, so we stopped at a meat stall and I had an Aberdeen Angus burger and daughter tried a Wild Boar burger, and boy were they very very tasty and filling.

Whilst we were there we bought some wild boar, ostrich and kangaroo sausages, we only bought one lot of each but thought we would try something totally totally different ( and my OH is a sausage freak!!)


I saw a Lapland stall that had some slippers, very different and unusual but I thought my feet might roast in them, but they also had reindeer skin rugs and reindeer jackets but ( ha ha) we don' t get that much cold weather and I have lost over a stone this yr, and hope to lose another before the end of it so wasn't sure what size to buy.

We eyed up some very reasonably priced hand knitted jumpers and cardigans with hand stitched designs on them, they would not have fitted Fifi but they had a Bob sized one with a tractor on but as it is proper wool might have affected his skin too much so didn't bother.

One of the things that caught our eye as we were going round was the "free from" signs, egg free, dairy free but the one that made us laugh was on the meringues - gluten free - well yes considering what they made of I would think so....a lot of stalls selling cake and biscuits but we are  not really biscuit eaters and free money or not I was not paying the best part of £3 for a slice of cake, or you could buy the whole thing for about £30...they were nothing to look at and not huge by any stretch.

In the end we bought the sausages, some salamis
and chorzoi sausage, some cheese, again for OH, daughter and I both bought a bag each, a pencil each for the kids and they had small alphabet letters made to look like train carriages with a front and back section so we bought them both their name,
definitely an ornament not a toy

and then, so as not to waste the final voucher I went and bought
some fudge of varying types....and very yummy they were too.

So thank you Kenny Campbell at Westsound for a smashing afternoon out.
Posted by fun as a gran at 22:39