Puddles and the Park.

Daughter is still without a car and this is limiting to the activities the children can do. Daughter depends on the car to get them to soft play on a Monday, baby gymnastics on a Wednesday and book bug on a Friday as these are not in the village. But her car seats are not compatible with my car so I cannot even help out and run them to places. So being the nice gran I am told her if she fancies getting out with them just give me a shout and I will go with her.

So on Thursday afternoon we went to the park. It had rained here for nearly thirty six hours by then and to say the least there were rather a lot of puddles. But of course all children like puddles. So Bob came with us and we went off to have fun.

So we dressed them accordingly and leaving the buggy at home we put their reigns on walked across to the park, let the fun begin. 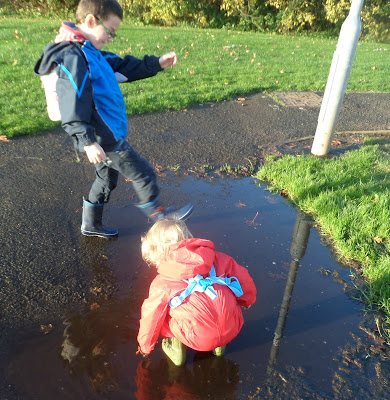 After they had finished with the first puddle as headed off towards the play equipment. Bob ran on ahead and the gruesome twosome followed.


They stopped for a play on the bench, Minky managed to get up on the bench, but Dinky is not quite as adventurous as her brother.


But oh no look, another puddle. This one provided lots of fun, watch the video and see. Poor Minky fell over in the puddle, got his hair and face wet,  but got up and carried on.


By this point poor Minky was sploshing rather loudly so we tipped him upside down to pour the water out of hi wellies. Bob also realised that running through the puddles at high speed was not a good idea either.

So while Dinky played on the swings Minky ran off all over the place playing on everything.


Meanwhile Bob was hanging around upside down. At one point in the video he stops and starts turning round in circles going "oh no", his glasses had fallen off and he could not see them so mum told him to stand still so as not to tread on them and mum went and found them for him.

Dinky sat on the swing saying "upside down" every time Bob went upside down.

She was quite happy to play on the swing. Minky came over and he had a go on the swings as well.

But he does not stay still for long. He spent a while on here making great noises with his feet on the grid floor. 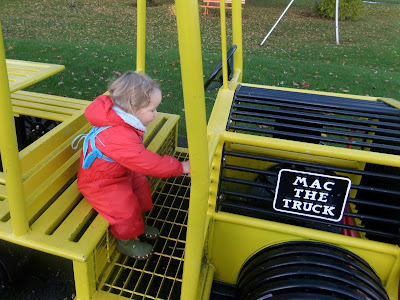 and shouted Bob over to help him steer as the steering wheel was stuck - it doesn't move!! 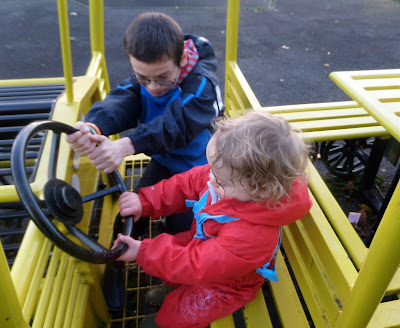 Bob was busy doing his own thing.

Minky climbed up the steps to catch up with Bob, 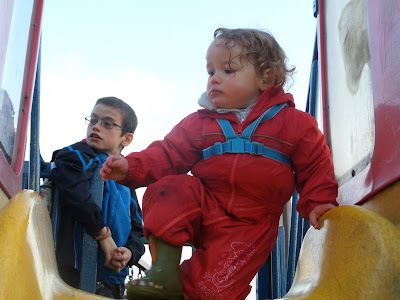 and then was shouting up to him 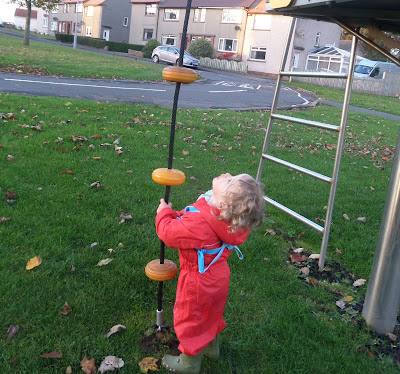 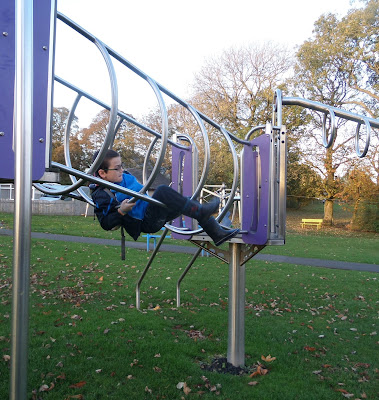 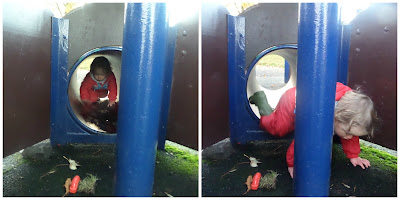 Bob had fun on the rope slide until Minky went over to him and stood in the way so he could not go down. 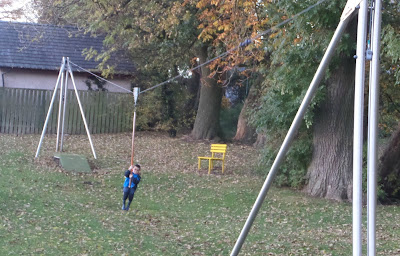 By now the twins had had enough and were both getting grizzly, so we headed home for a bath, tea and bedtime.


Bob and the twins having great fun running through puddles.