Well the rest of my blood tests came back as normal, nothing what so ever to worry about. Nice to know really that everything is functioning fine, that I am not lacking in the major vitamins, calcium or iron and don't have too much cholesterol or the wrong amount of sugar. Just goes to show that size is not always an indicator of health.

One of the advantages of working in an ophthalmic ward is when you have a sore eye at a weekend somebody is on hand to have a look at it for you and give you something for it.

Went to have a look at how high the water was at the dam. It was HIGH, But I did not realise until I look at the pictures when I got them home that there was a bird bobbing up and down in the swell.

Have started doing my evening workout while my tea is cooking, but before I do my workout I make a milk shake with soya milk, a banana and a spoonful of wheatgerm. I can not eat bananas but they say they are good for you and I can take them like this.

We decided to go and do some geocaching. The sky was blue and for all it was cold it was dry. So as hubby wanted to do something up the Valley we headed to Darvel and the intention was to go up to the birthplace of Alexander Fleming, a remote farm a few miles outside of the town. There are a series of caches along the road, but we need to park about a mile away and walk as the road was not drivable in our car. But we got just over half way when the weather started to close in and so decided to head back to the car. Made it back just as all hell broke lose with sleet. Not the sort of place you want to get caught.

Was making a chicken risotto for tea and was cutting up a red pepper. Have never seen these inside a pepper before, but apparently they are baby peppers.

Been sticking to my nightly workouts. Mixing them up between aerobics and weights. Tonight was an upper body weight workout. Have got it linked onto the tv now makes it easier to work with.

Our tumble dryer was one of the ones involved in the product recall. But the last e-mail we had said it would be at least April before they could get to us for repair. So as I had a very small windfall we decided to take them up on their offer of a new one at a hugely discounted price.Ours is nearing four years old so seemed logical. They delivered for free and took away the old one and the packaging. 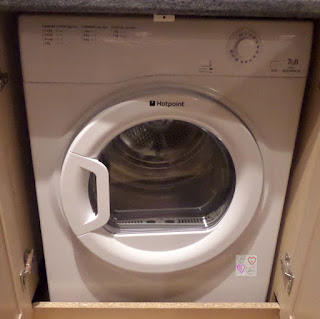