Have had a variety of conversations lately with Fifi and we have discussed things like my family, my upbringing and it often brings comments of...I did not know that...
When my eldest two daughters went to their paternal grandmothers funeral they had not realised some of the things about her, what she did before she got married, where and how she met Papa, what they had done with their lives etc and it got me thinking about what my children would know to add when it comes round to writing a bit about me. So thought I might help to make it a bit easier for them.

I was born Elaine Heather Bennett on 28th November 1959, and yes I know I turn sixty this year, a scary thought in itself. I was the third of four children with a brother, Colin, born in May 57, a sister, Coral, in October 58, and a younger brother, Kevin, born in August 64. My parents had met as dad was a chef in the RAF and my mum did secretarial work in the WAAF. My dad was the eldest of two sons, and I recall my uncle being around a lot. My mother use to tell us she was one of thirteen but I only ever recall meeting one of her brothers.

I grew up in the forces, we first went abroad when I was six weeks old, that must have been a bit of a nightmare for my mother having three young children to take by herself as my dad was already out there. We have various pictures of us abroad until I am about three. I know my brother was born in Cambridge and I recall various bits of living in Colindale in London. My school reports date us being there between '66 and '70. We use to spend a fair amount of time with my Paternal grandparents and I remember a lot of happy times there along with three cousins who lived more locally that we did to them. 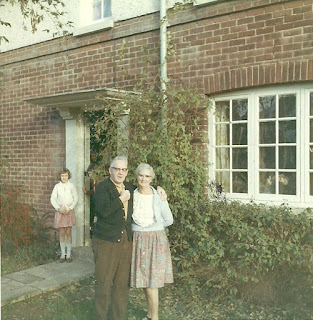 We did not spend as much time with our maternal grandparents and I have a picture of me photo bombing them stood on the doorstep in London just before they went off to live in Australia where they had other family. I got a sever ticking off for that as film was expensive to buy and develop. I am sure they took another one without me in it.


We lived at RAF Gatow in Berlin from June 70 to Feb 73. Loved the school, the people and the friendships that were made, it was a British Forces School so everybody was in the same boat and they all knew what it was like to be the new person and everybody made you welcome. We had so much freedom back in the day and had proper outdoor childhoods with hours in woods and play parks and in the winter sledging on the ski slopes.

From Feb 73 to June 73 we lived in Dunkeld, one day I will go back and lay the ghosts to rest from that period of my life. We got our dog Candy and our cat Fluff when we lived here. We then did a year in Machrihanish, loved that place, and Campeltown had the best school dinners I ever tasted.
Then two years in Portobello, Edinburgh - at that point Portobello High School was in the Guinness World Record book for being the largest school in Europe.  My dad came out of the forces in June 1976 and we moved to Bo'ness.

My first job was hard to come by because there was nothing for outsiders in Bo'ness at the time unless you wanted to work in a factory. I eventually managed to find work as a recostings clerk for a large Insurance company just outside Stirling. It made for a long day leaving home just after 6 to start work at 9, finish at 4.30 and home just after 7, public transport at the time was not good where we lived as it was a new housing scheme they were just building. I left that job and did six months as a live in nanny before I had DD1.

I worked for years as a registered childminder when my own children were young rather than going out to work.  We moved to Ayrshire in 1994 as Grangemouth was not a healthy environment for asthmatic children. Second hubby and I have been together since 1994.

So there we have some basic background information that my children can now give to the humanist people when they plan my cremation.