Have watched two series of Hinterland this week, pretty much a Welsh Shetland but a good watch. Started watching Ray Donovan on Friday night, not so sure just yet but will give it a few more episodes.
Hay fever is doing my head in, sneezing none stop, a very runny nose and itchy eyes, none of my usual ideas are working. Plus a cough as my asthma does not seem to be well controlled, but guess it is linked to the allergies that are going on. Must of had a good twenty years before last year hay fever free no idea why it decided to come back.

I am fed up of never having a day in the house, so I decided I was going nowhere today. It was not a lazy day as such, still managed over 5 miles thanks to the exercise bike. Did some sewing, did some tidying and  hung the washing out for the first time this year,  unwrapped it from round the line a dozen times  but it only needed ten mins in the tumble dryer to air it off so was worth it. 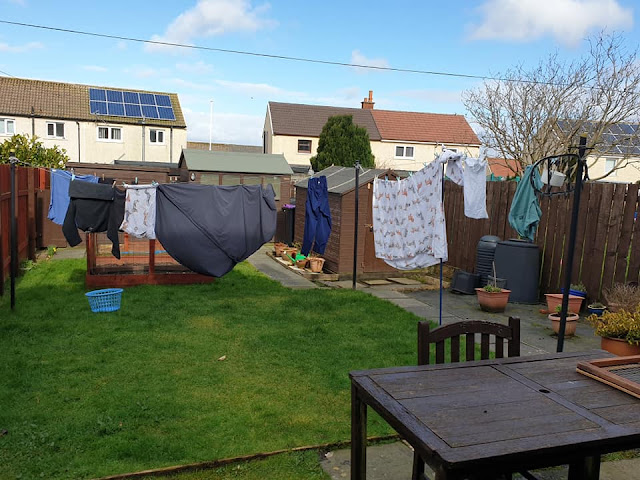 Another uneventful day. Some walking, cycling, some knitting but not a lot else.

One walk was round a localish park. They had set up a number trail and each number had an item on the back of it that you need to find. Saw three groups of nursery age children walking round the trail. 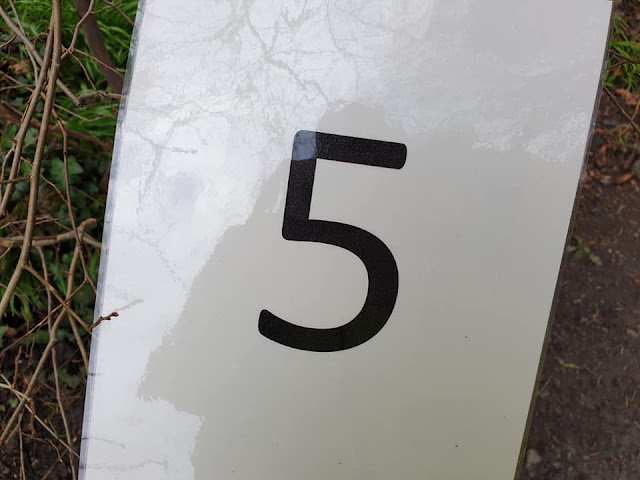 Getting fed up of one half of my strap on my fitbit coming off. Seems to be fine when wearing it but falls off when I take it off. They agreed to send me a new one out, this is a known problem with the Charge 2.

Hubby had spotted an advert for somebody locally with red chip stones to pick up for free, he has a use for them in the garden, so we went and picked up half a dozen bags. 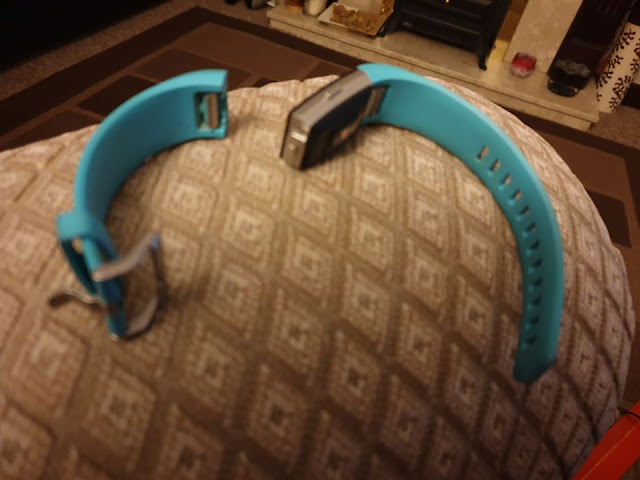 Had an appointment with Occ Health at work today just to get things on paper with them.
I then headed to the doctor, but turns out my appointment is not until next week...numpty that I am.
So I decided to go for a walk to kill time as the cheap food shop is open on a Wednesday.

Lots and lots of veg today so hubby peeled a huge pile of carrots and a butternut squash, a pile of onions and potatoes for tea. I sliced them in the food processor. While the oven was on for tea I roasted the butternut squash with some peppers and onions, boiled a cabbage as well.
Most of the carrots and onions went into the freezer to make them easier to use when I need them. 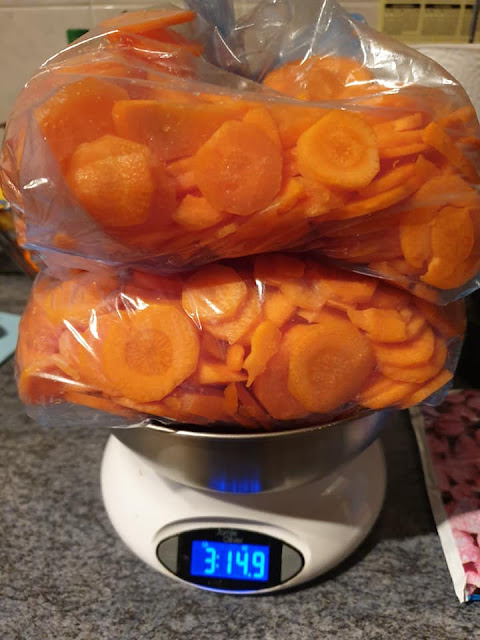 Made a pot of carrot, butternut squash and lentil soup with the veg I roasted last night.
Also made a fruit crumble to use up some of the bananas I pick up yesterday. Was going to make banana loaf as well but realised I had no sugar.

The remains of the vegetables from last night made a reheated stir fry with some ready cooked chicken from the freezer as well.

Dixie dog and I went for a walk round the fishery, thought it would make a change from round the street on her lead, she has to stay on the lead down there as well but  a change of diet. Far to cold to remove gloves for taking pictures, nothing new down there anyway. Had three layers on as well as a hat and my hood up as well as waterproof trousers in case it rained as they doubled as a windproof layer. Was baltic out.

Was rather frosty first thing, this is the rising sun shining across the windscreen of the car. 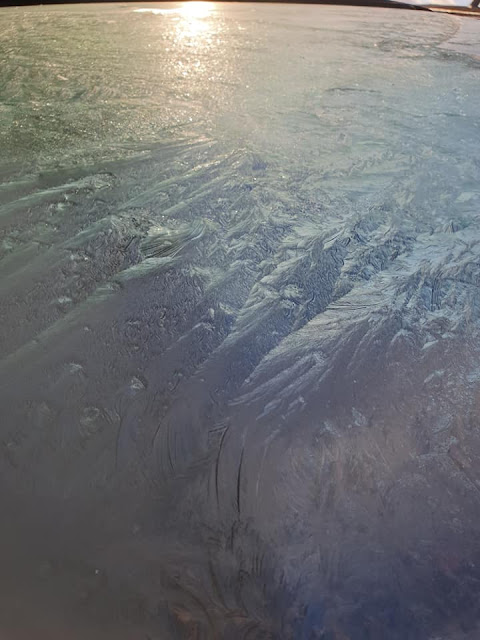 Went to get a few bits and pieces at the supermarket, mainly dairy free milk and yoghurts that I could  not get earlier in the week.

Came home and started mince and tatties with veg in a pan and then transferred them to the slow cooker  for tomorrow night's tea. Made the banana and sultana loaf  mix and left it just needing the flour added.

Dropped Bob at gymnastics as the three wee ones are starting karate tonight so DD1 had to take them to enrol them. Once we had dropped him off we went and took the dog for a run round at the country  estate again. The Hansel and Gretel house area now has a barbecue pit, a rope swing, a pin ball slide and a kitchen area.

Home to add the flour to the loaf mix and cooked them. Had the rest of yesterdays soup for tea with cake and custard afterwards, 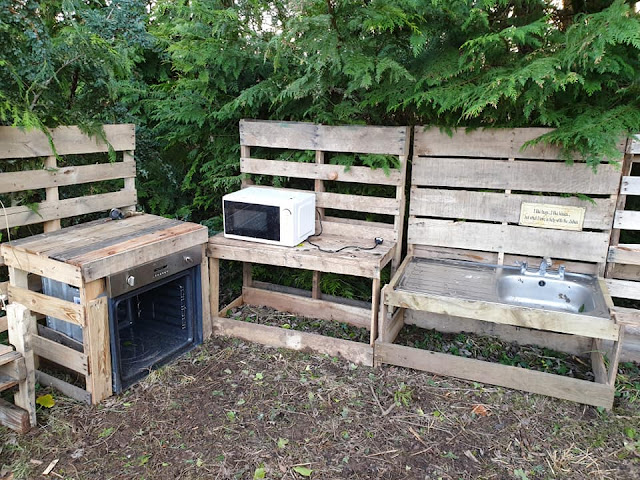 A quick busy day at work, just the way I like them.
Home to finish off the last bit of a poncho ( well the knitting pattern calls itself a poncho not so sure that is what I would call it) for Ziggy. Got a few bits to send to Roo as a rather late birthday present but as they are now very late felt it was wrong not to send Ziggy something as well. But it is a lovely thick item that will be handy for outdoor nursery through the Spring and chilly Summer days. Had some wool left so made her the matching hat. It is actually three balls of different wool knitted together and matches Roo's poncho. 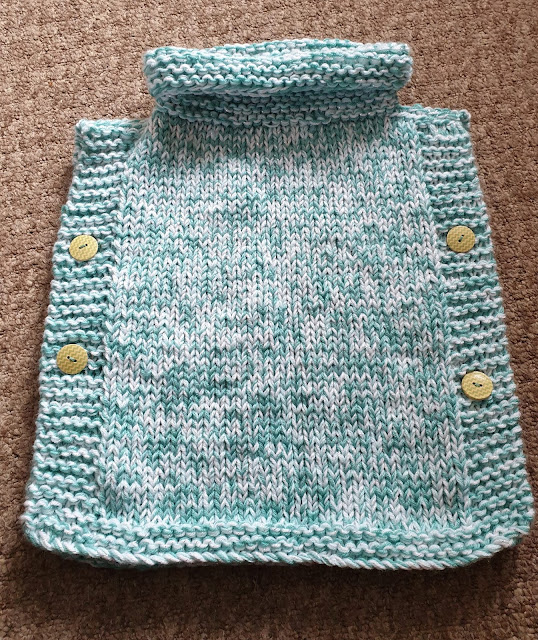 You are invited to the Inlinkz link party!
Click here to enter
Posted by fun as a gran at 14:14