What a difference a week makes, last week I drove to work just as the sun was rising, beautiful red tinges to the clouds, this week it was dark, not quite dark enough to need full beam but not far off it.

Love the mug I have to say.

Went and did my Olio food pick up at 8.30 and then home to list it all. Most of it was allocated by 11pm, what is not allocated goes to work with me the next day. 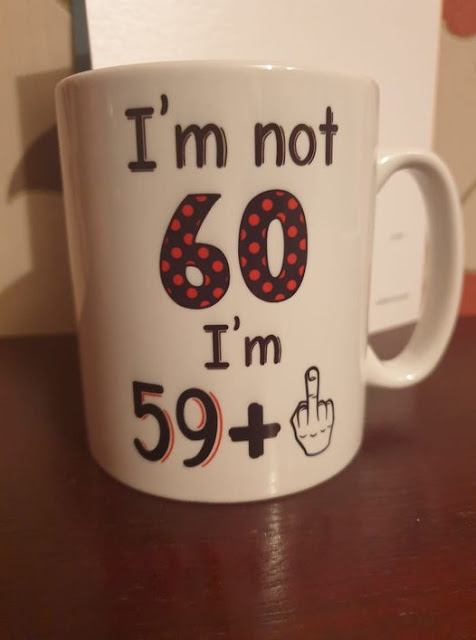 Another detour on the way home from work to pick up a few business cards as looking for somebody to lay cushion floor for us. Then went to pick up an order from Toolstation, could do with shares in them this year!!. Was also going to the dump as is between Toolstation and the bypass but took one look at the queue and decided not to bother - am not that desperate to get there.

Tea tonight was home made turkey burgers, stir fry ( thrown in the oven along with the turkey burgers) with some rice noodles and crispy cooked spinach. All the meal cost me was the electricity to cook it. Hubby had mushrooms with his. 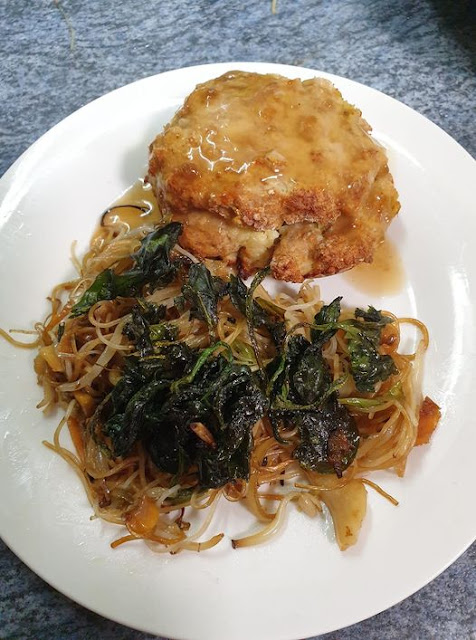 The first of four birthdays this week. Today is DD3's.

Worked my way through the housework in between helping hubby lay an armoured cable to run electricity into my new shed. We both ended up rather muddy due to digging in the garden and the ground being so wet.

We then headed into Kilmarnock as the NHS are doing flu jags for staff again but only week days so combined it with a walk for the dog. Prefer to take hubby with me I know I never had a problem with one in the past but always worry I may take an allergic reaction to it so don't like to go alone.

This happy chappy is at the entrance to the hospital. 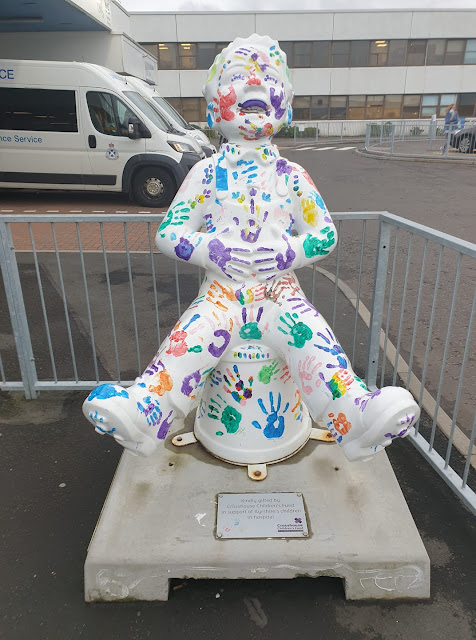 Into town to do a few bits of food shopping and added a few things to pop into a friend to cheer her up. She has had covid and is on the road to recovery but still feeling rather down.

Also bought a few more bits and pieces for my Christmas collection.

Went and picked up my food that I pick up from Tesco that I signed up to do through the Olio app. The idea is I pick it up for free and share it with the community. 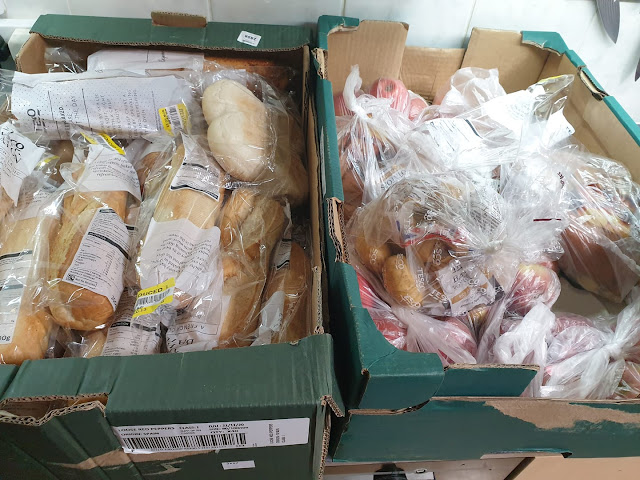 Today is Fifi's 18th birthday....not sure  where the years have gone but my grandchild is now a grandadult.....A truly amazing young woman who has so many skills and has achieved so much already in her short life.

I can now reveal the crochet I was doing....Stitch with a ribbon that says Happy 18th Fifi ( well her real name anyway) . Also got DD3 to make her a hoodie as well as she prints clothing.

Rotten awful weather to wet and too windy to go cycling.

We watched The Sister on STV catch up. It was a good watch. 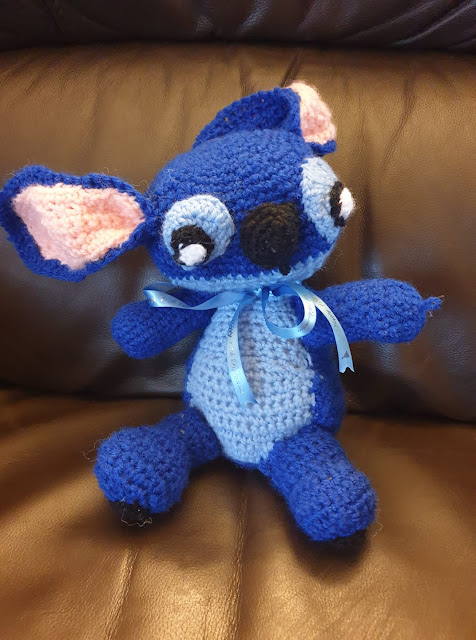 I got a reprieve from cake making as DD1 got a personalised one made for Fifi.

Was suppose to be going out on a bike ride but feeling rather bleugh, no energy and hubby complaining of aches and has a cough so not risking meeting with somebody else.

Took some more boxes to the dump, it is totally open air, and walked the dog along a quiet beach.

Made the twins birthday cakes.

This is a few more bits for a Christmas charity. 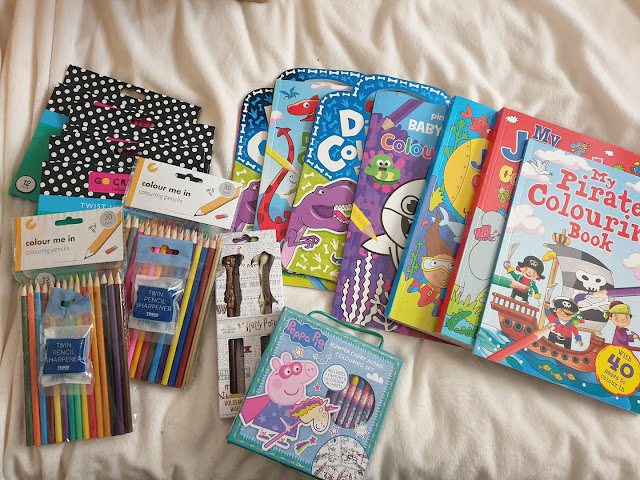 Posted the hats off for the two girls.

Think my bleugh feeling may have come from something I have eaten, my tinnitus and my stomach are both playing up, and yes there is a link there to allergies. Took a piriton and hope it might help. Hubby seems ok today.

Decorated the cakes and made biscuits for Bob seeing how he cant eat the cakes. Can't find icing sugar he can have so did not want to make him a dry boring cake. The biscuits decided to spread in a thin layer across the tray so made a second batch to a different recipe, but they did the same, Not sure if it was the rice flour which I don't normally buy but was the only gluten free flour I could get and all my other stuff is past its best. Bought a tube of Halloween frosting for Minky's cake, suppose to be orange with a black stripe but could not get it to stick to the top of the cake in stripey rows so just ended up spreading it. Took them and the presents down after they were in bed as we are not allowed in other houses currently. Normally I take them in and they blow out the candles and cut the cake while I am there, so did not want to cause upset so thought this was the best way and DD1 will tell them Grandma is at work. 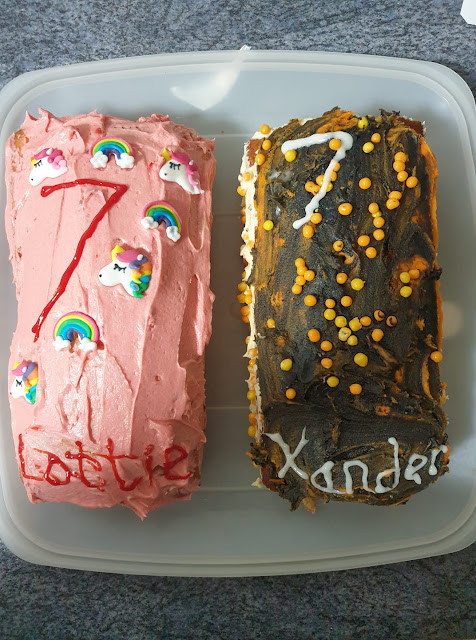 As of 6pm tonight we are now in a level 4 lockdown area, only essential out the house, not to go out of our own council area if we can avoid it and all none essential every things shut. Places allowed to stay open to do takeaway food but no sit in.