A Sunday afternoon out.

I don't have many weekends off, as they are my "working week", but I get holidays like everybody else, so this weekend I had a Sunday Afternoon out.

I did not have to go far to do this, just up the road to Alloway for a day out called Alloway 1759. It is a celebration of the well known Scottish poet Robert Burns.


The afternoon was advertised as 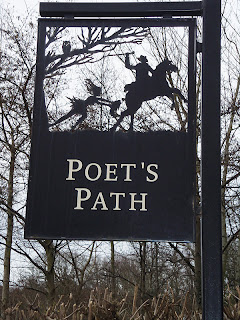 We parked on a side street, and walked past a "street market" which consisted of a few oldie looking vehicles selling modern wares ( too many mingling people to get a photo of them) along to the street activities in front of the cottage first of all,  but could not get near enough to see or hear what was going on on the stage, so we wandered off again along Poet's Path to the Museum.

There are a whole row of weather vanes depicting different poems along the path, hence its name. 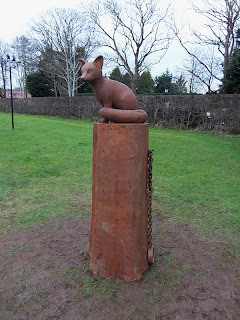 Along the path is a new statue of a rusty old fox, sitting a top a log with a broken chain hanging by its side, it was unveiled on Wednesday, the birthday of Burns, and it commemorates the poem A Fragment.

It signifies the fox escaping capture.


Along to the museum which hosts a whole host of activities and had a fiddle orchestra which had a lot of local children in, nice to see the traditions being passed on.  At the museum we met Holy Willie, from Holy Willies prayer, he was doing a reading of the poem, and we asked him to come outside to get some photos inder the sign, which he willingly did even scantily clad in the cold, saying it wont take long to take a picture, and then ended up with dozens of photos being taken by all the tourists.


The picture isn't perfect but you are not officially allowed to use a flash inside the museum, so I went into program mode and changed up to 1600 ISO ( how good am I getting...lol)


We then decided to walk back to the cottage and see what was going on inside the cottage and in the education centre that they have there. The was "haggis hurling" for the kids, who seemed to be enjoying it and were getting plenty of encouragement by the adults running it.

In the education centre they had a lot of items to look at that were around when Burns was alive. 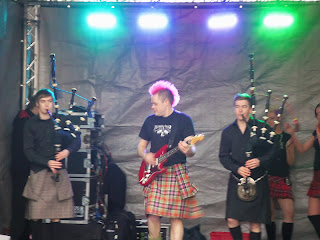 Lastly we went back outside and got near the stage, in time to see a group called Bags of Rock, rock music on bagpipes is the best way to describe them, and very entertaining they were too.