The other week Bob had another hospital appointment that his mum knew would involve having blood taken. Bob is not overly keen on this, though improving as he gets older, but she did not want to have to take the three wee ones in with her as it was easier not to. Normally I would have kept them at home and gone the park but I was doing holiday relief cover and was in the town and did not have enough time to get back before she needed to leave. So I arranged to meet her at the hospital.

We put Spud into her pram and I set off with her and the twins for an adventure. The path we were walking on was one of the ones we walked on a few years ago with the older two on the day the paths were officially opened. You can read about it here if you wish.  I have used the paths and walkways quite a few times since that day but never used this path as the others are easier to access and lead to a longer walk, this one is great for a short walk, takes about ten minutes, and so I was surprised to see some of the props that had been used in the treasure hunt were still there.

So having set off into the woods Minky decided he did not like woods and was scared. He spent a lot of the time either holding onto the pram or looking about him tentatively. No idea why it is not as though they were dark woods and they have been opened out with proper paths in them. Dinky was quite happy to run on ahead and climb on all the seats and look at plants and explore her surroundings.

We came across the big egg and Dinky was well keen to explore it, Minky did try to lift it but said it was heavy, and as it was a painted rock it was heavy. 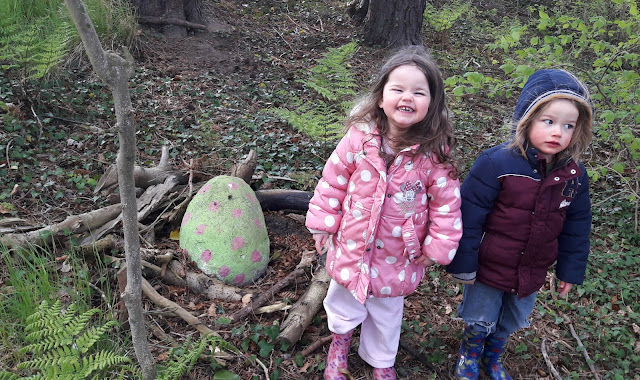 We found the remains of the bug that had been there and we spotted the face carved into the tree, Minky really did not like that and said it was scary. We then came across the Goldilocks chairs. The older two had their picture taken on these by the official photographer on the opening day and the NHS have used the picture more than once on their advertising leaflets that tell you about the walk as well as in various press releases. You can see them in the bottom photograph here.  Minky would only sit on the same chair as Dinky on the way up he was not wanting to sit by himself for a photograph so a shared chair it was. 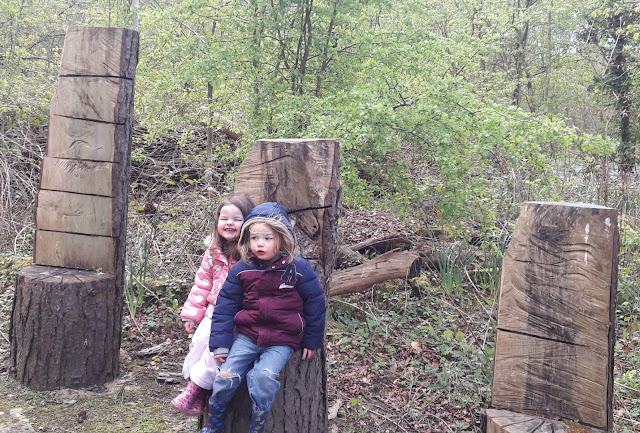 We carried on and came out out of the end of the path into an open field. Minky seemed much more comfortable being out in the open and they both ran off and picked flowers, I use the term flowers loosely as they still only really pick the heads and filled up the string bag on the side of Spud's buggy with them.  So we crossed the open space between two of the walks and carried on up the hill. This is a walk we often bring Lilly on much more open. The twins were both happy to run off up the hill and Dinky sat herself on each of the benches on their way up. The walks have a lot of benches but then it is a hospital walk and it is to encourage patients to get fresh air and exercise with their visitors,

They ran off up to the wigwam 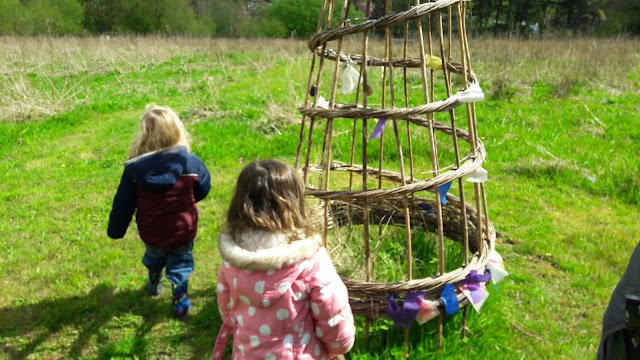 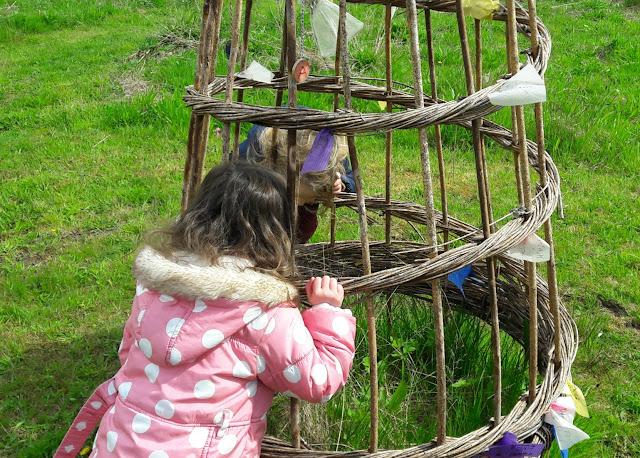 and then up and down the hill Love Minky's struggle back up hill at the end of the video.

As you can see Dinky has a stick, they both picked one up but Minky decided he did not want one on the way up but did pick one up on the way back down. 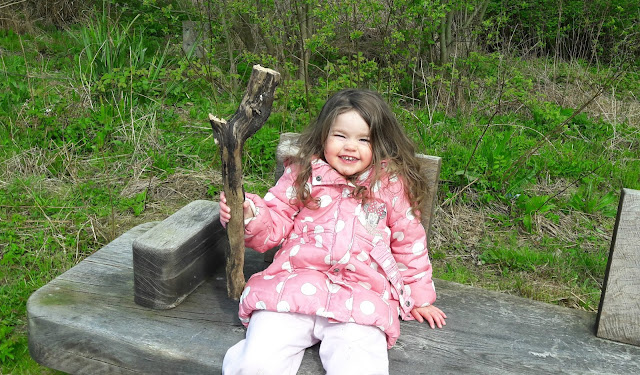 Then on the way back to the car Minky decided he wanted to sit on a chair by himself, though his face seems to tell a different story. 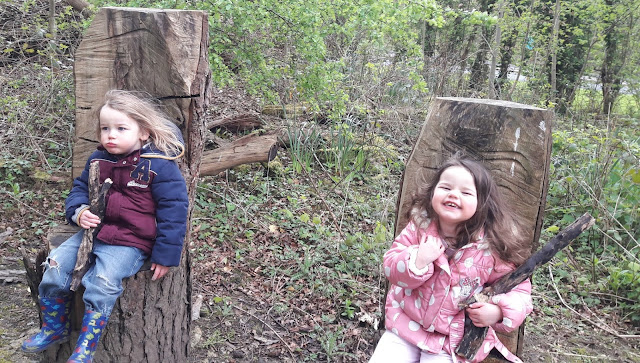 I think the forty five minutes we had was probably a lot more fun than it would have been waiting for their big brother in the hospital.