Auntie H again! For those of you who haven't read part one of my Kiltwalk experience you can catch up on it here

So it was finally here..Sunday 30th April - The Glasgow Kiltwalk 2017!!
A very early start to the morning, the alarm went off at 5am and (despite my brain's protests) up I got to wake M and get ready to head to Glasgow Green, where I would start the day off. I'm sure M can't wait for the day I can drive, he really is a champ at getting me to where I need to be if public transport doesn't suit. We left at 5.30am as I had to be there for 6.30am (Chieftan's have to arrive half an hour earlier than their teams) and we weren't overly sure of the route to get there. Thank goodness for satellite navigation, it certainly makes life easier!

I had a good chance to wake up and get excited on the drive up, so by the time we arrived I was raring to go. I said goodbye to M whom was heading home to go back to bed, and found my way down to the tent where everyone was meeting. There were quite a few people there already, I believe the Kiltwalk Staff had been there for at least an hour or two before the rest of us were scheduled for. We milled about for a bit, getting badges, water, emergency contact numbers and listening to our final safety briefing. We then separated off to do what we needed to to be ready for our teams arriving. T headed off up the road with N to meet most of the Carnival Kilties at a prearranged point. I waited at the registration tent for the rest. Once everyone had arrived we cracked open our facepainting supplies and various bits and bobs of costumes for the day. We had a blast painting each other, trying on funny hats/wigs and playing with the random noise makers etc we had brought. By the time we were ready we looked like quite the troop!

We split into two different teams, as although we were all to start off the Mighty Striders (23 mile walkers) at Glasgow Green, we would split up later. One team would stay until all of the Mighty Stride walkers had left and the other team would be redeployed to Clydebank to start off the Big Strollers (15 mile walkers) Team 1 (T's team) would then head off to Balloch for the Wee Wander (6 mile) start and then both teams would be redeployed at various points along the route, wherever motivation was needed the most at the time.

The first walkers started arriving and we headed off to our first point in the queue. We got lots of smiles and cheers from the walkers, all of whom looked great and were excited to get going. There were people of all ages and plenty of four legged walkers too, we figured 23 miles should be enough to tire out a dog, boy were we wrong! lol Our job at the start was to keep people amused and excited whilst they were waiting to reach the warm up point. As there were thousands of walkers they were released in batches to help with congestion on the roads etc

Once most of the Mighty Striders had gone, Team 2 (my team) headed off to Clydebank to meet the Big Strollers. We were escorted by 2 lovely gentlemen who chatted away and told us about their Kiltwalk experiences over the last few years. They ended up being our pickup team for most of the day which was great as it meant we got to know them even better. Once we got to Clydebank we started mingling with the walkers, taking photos, making lots of noise and dancing around like crazy. I saw lots of people I knew and got some photos with them which was cool. It wasn't long until they all set off, full of energy and ready to stroll the streets.

After they had all left we headed round to Pitstop 3 which was nearby, to get some soup and a roll whilst awaiting our next redeployment. A lot of the Mighty Striders had started arriving when we got there, and it was nice to see them still in high spirits. We had fun shouting encouragement and telling them all we'd see them again soon. A lot of them commented on how fast we had got there, and we said it was much easier on 4 wheels, to which they all laughed.

We were redeployed to a stretch of road outside Dumbarton Academy and this was where we knew we could make a difference. The walkers were beginning to hit the wall by this point, having walked around half (Big Strollers) or 2 thirds (Mighty Striders) of their distance. We handed out some treats, shouted how far they'd come, how well they were doing, keep going! and danced to some music from our phones. It was great to see them brighten a little as they passed, before getting their heads down to push through. There were teams who had a member struggling and it was amazing how they all pulled together to push them forward, refusing to leave people behind. The residents in the surrounding area kept popping their heads outside to see what on earth was going on, and it was nice to see them smiling and clapping for the walkers. The only downside to our position was that there were no facilities nearby and so after about an hour and a half we had to call for a pickup.

At this point we were taken to the finishing line, where we had the chance to get some snacks before heading down to the last stretch of the walk for everyone. It was literally 2 minutes away from the finishing line, but at the bottom of a long relatively steep hill which was the last hurdle. We screamed/clapped/cheered and danced like mad to give the walkers one last boost. We told them just how close they were to finishing, 'just up that one wee hill. Hill? I wouldn't even call it a hill, it's a gentle slope, barely even a blip on the hill scale' which got a few laughs and a lot of aw man's. After a bit the rest of my team had to head home so I recruited some Kilties from further up to help me out, and T joined me once her team had finished their duties elsewhere. We had a great time together, I'm really looking forward to seeing her again at the Edinburgh Kiltwalk.

We called it a day at half past 6, the majority of the large groups of walkers had made it in and so we left the other Kilties and headed up to call in the end of our shift and get some food if we wanted it. I left T to enjoy herself and get a well earned drink and headed off to see if I could get a place on a bus back down to Glasgow Green. I did and it was a bonus when they announced they were stopping at Argylle Street, as this made it easier for me to get to the train station. I had just under an hour to kill when I got there so I got some chips, a hot chocolate and a relatively comfortable seat.
My ever wonderful other half M came to get me when I got back to Ayr, we ran a quick errand to my sister's house (DD1 as you know her) and then headed home. I got everything ready for work the next day, grabbed a quick shower, iced my foot (amazing feeling after what I had put it through all day haha) and then it was finally bedtime. I checked my watch, which measures distance walked, step count etc and I had walked more than 9 miles over the course of the day!

All in all it was an absolutely fantastic experience, I am really looking forward to Edinburgh in September, and I'm seriously considering doing all 4 next year! I'll leave you with a final picture of the Carnival Kilties getting ready, selfie style taken by T: 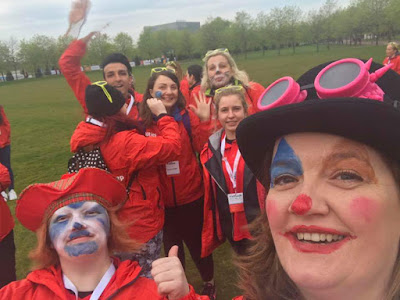