Dealing with feeling the pinch.

It is January and I think most of us will be feeling the pinch of Christmas,we get paid early and so it is six long weeks between being paid in December and the next pay at the end of January. So we all need to find ways to eek out what we have  to tide us over.

There are many ways of doing this, from treats like these cheap Cadbury deals  to looking for bargains in the supermarkets and utilising the freezer. I had gone into the supermarkets before Christmas and one was doing a kilo of carrots or three leaks or a kilo of parsnips all for twenty pence each. I also did some shopping on Christmas Eve and braved it purely for the knock downs - peppers, courgettes, potatoes, and butternut squash for pennies. These were all prepared and popped into the freezer, keep them in good condition and make them easier to use and means no waste at all.

I have been making cheap meals in the last few week. We have a local place that was doing chicken thigh pieces on a BOGOF deal in the month of December and so as I had let my freezer run down I went and bought eight bags for the price of four, so for a mere £10 I got enough chicken to do us an average of twelve nights. 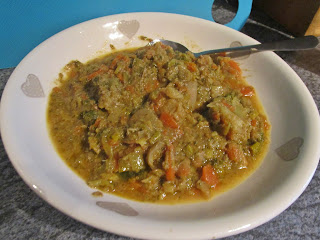 On Saturday I did chicken in a jar of korma sauce in the slow cooker. I cooked ten pieces, we ate three each that night and I left the other ones to go cold. When I had taken the chicken out I added some carrots,peppers broccoli, leeks and parsnips and left them to cook until bedtime in the left over korma sauce, made a great lunch in this snowy weather. I shredded one of the cooked pieces of chicken through it when I reheated it for lunch.

With the other three pieces of chicken the plan had been chicken omelette and chips, so on Monday night while I was doing the gymnastics run hubby dug out peppers courgette and sweetcorn from the freezer, chopped an onion and whisked up four eggs. I fried off the vegetables for five minutes before adding the eggs , grated some cheese over the top which I melted under the grill and dished it up, it was at that point hubby reminded me I had forgot to add the chicken.....so we ate it cold along side the hot food. I do wonder about my memory at times. It tasted great anyway.


DD1 had been in the supermarket the other week and had picked up twin packs of ready rolled pastry for 25p as they only had a few days to go so with this I decided to make a meat and potato pie. The pastry freezes and being individually wrapped so I only needed to take one out of the freezer.

Brown off the mince and onion, this works better with cheaper mince with the higher fat content as it has a better flavour to add to the vegetables and potatoes. Add stock as per your families taste, and I popped in carrots, peppers, butternut squash ( all taken from the freezer)  and some diced potato, cooked for twenty minutes until all the veg was soft, poured it into a oven proof tray and topped with a sheet of pastry. Cook at 170 oC for about 15 mins until the pastry was cooked. A nice easy all in one meal that did one night on its own and another night with a few roast potatoes and some veg. I have a halogen oven so no need for the big oven just for a few potatoes. 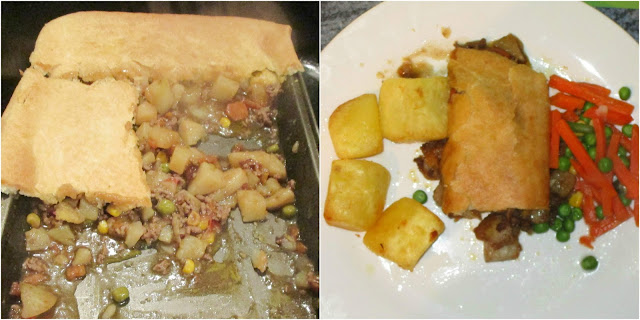 
I also have some rice krispies to use up as DD2 had bought some when she was here over Christmas, and when clearing out my baking cupboard I had found some bars of dark chocolate that I use for baking Again nothing posh about them, basic white label dairy free 100g for 30p in the sweet aisle.. So to start it was just melted chocolate with the krispies and spread them into a flan dish and left them to cool.

Meanwhile I made a sugar free raspberry jelly with only a 1/4 pint of water, and then topped it up to a pint with soya milk to make a milky jelly. When the jelly was on the point of setting I covered the krispie base with a tin of drained broken mandarin segments but basic peach slices or fruit cocktail would have worked as well. Then I poured the jelly on top. So you have a nice compromise here, healthy milky sugar free jelly full of calcium with some fruit to combat the chocolate in the base. 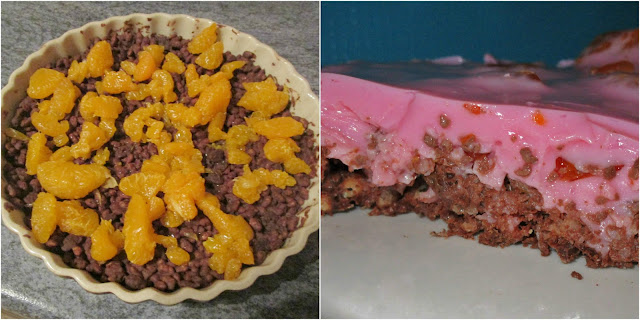 So how are you handling feeling the pinch? Do you have any hints or recipes to share, please add your links in the comments.