Sat in the car in between shifts listening to my audiobook and doing some sewing. Was watchng the squirrel in the tree eating the seeds out of the pine cones.

Had volunteered for overtime tonight as it is thin on the ground at the weekends at the moment. While I was out during the day doing other things hubby washed and ironed my uniforms for me, I only have two which is one each day at the weekends. While hubby is busy helping the dog is busy making a mess. 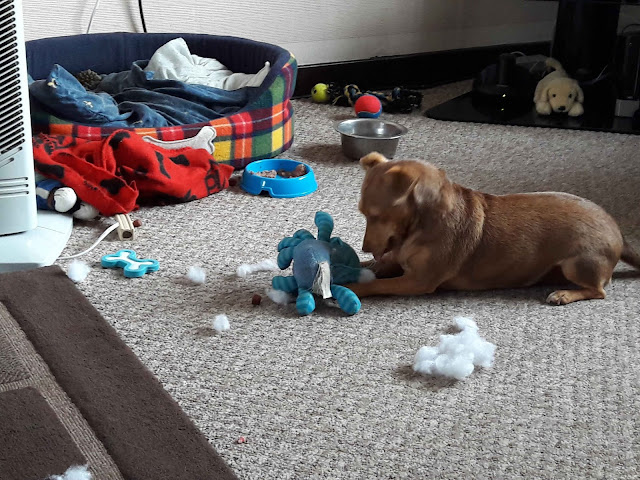 Was a nice evening so we took the dog up to Failford for a walk, was only going to be a quick walk as she had been out down the woods in the afternoon. But ended up doing just over 6000 steps and it was getting dark as we headed back.

A busy morning doing catch up stuff, changed over to Sky as we are getting our package plus our two mobiles for £2 more than we were paying for BT and we were paying for our mobiles over and above that.
New car insurance and breakdown cover has kicked in.

An evening walk round Eglinton Park, we went to bits of  the huge park we have not walked round before and spotted this statue. A wee bit history on it here. The sculptor made prmarily for cemetaries. 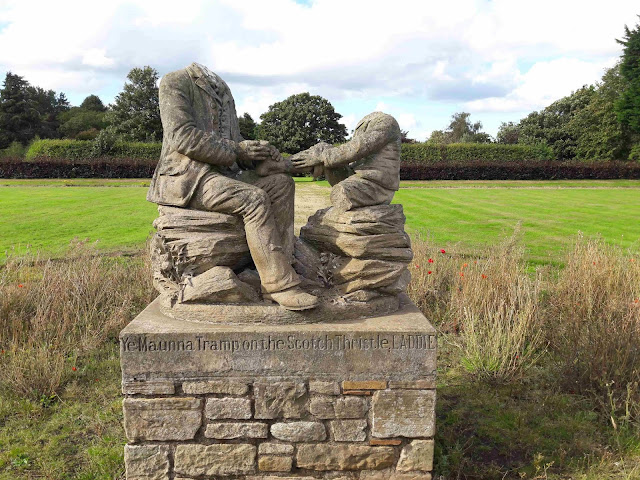 Some housework and ironing, Hubby fitted the dashcam into the car.
Made some treacle and sultana pancakes for lunch and then went and joined the ladies monthly bike ride. Six miles along cycle tracks from Barassie to Irvine. Hubby dropped me off and picked me up and he was walking the dog while I was cycling.Then we did another couple of miles round the Irvine Beach Park. Zillions of rabbits there again. Thankfully Dixie dog has no notion to chase them.
The Fitbit did not pick up the bike ride again, even though I did try it in my pocket instead of on my wrist this time. .
Walked down to DD1's to drop off a light bulb for Bob's bedroom in the evening.

A walk round Auchincruive and amazed at how well all the soft fruit bushes have benefited from the rain we have had. The crops were lookingvery very poor a few weeks back but I think next week I will stop off and do some picking of blackberries and raspberries.
Last time I tried blackberries a few years back I took a reaction to them despite them being cooked, but that was in the third day in a row of eating them, so hoping if I go easy I will be ok. They have so much more flavour than shop bought. A number of apple trees in the same area but the apples are crab apple size so more suited to a juicer than peeling and coring.

Bob was suppose to have a hospital appointment and DD1 was going to take them all onto the Sealife Centre at Balloch afterwards. But sadly between Minky at 1am, DD1 and Fifi about 3am, Spud at 5am and  Dinky at just after 8 one by one they all went down with a vomitting bug. So they went no where. Thankfully Bob somehow avoided it (so far) as he would need to be hospitalised if he got it. I steered clear as I did not want it.

Hubby spotted these on a local selling site and liked the idea of imbedding one into the wall when we get the wall coated.