As we don't have young children any more the magic has gone from Christmas day for me with no excited faces to wake up to and so for a number of years have ignored the day as much as is possible. So having decided last year to go and help out on Christmas day at a local event providing a meal and entertainment for people who would other wise be alone on the day, we are now planning on doing this annually. Because we have the dog we did not want to be away for as long as last year and so instead of volunteering to pick up people and take them to the event and then take them home afterwards we decided this year just to go and do the event itself.


We opened our presents in the morning and Dixie dog got hers. 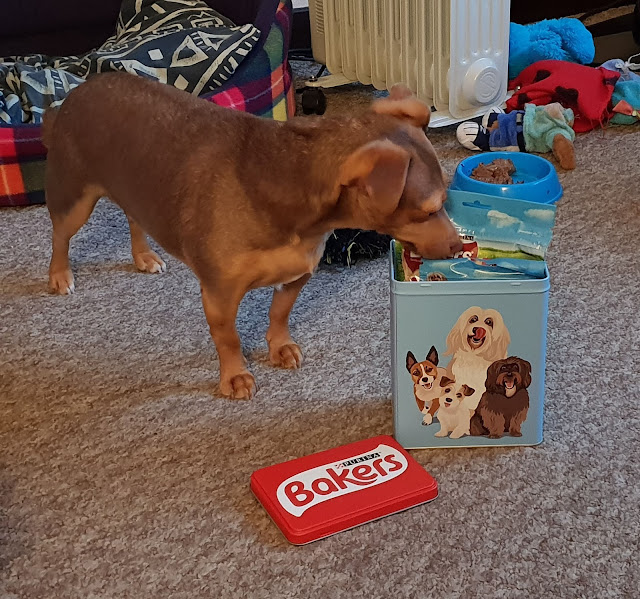 This ball was from our neighbours which was lovely of them. 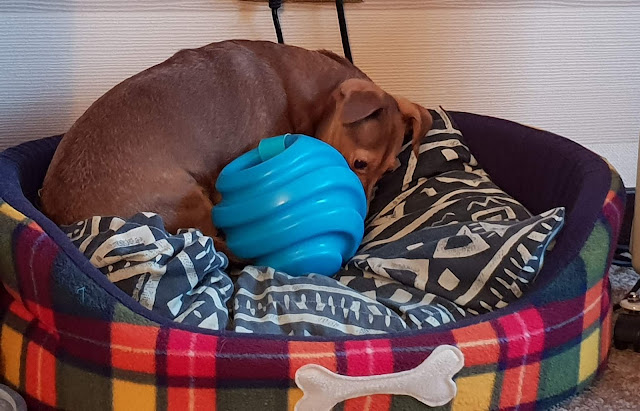 So I helped to serve food and take photographs. 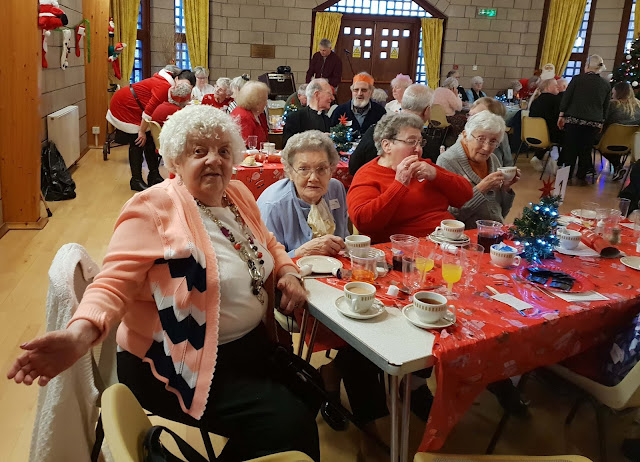 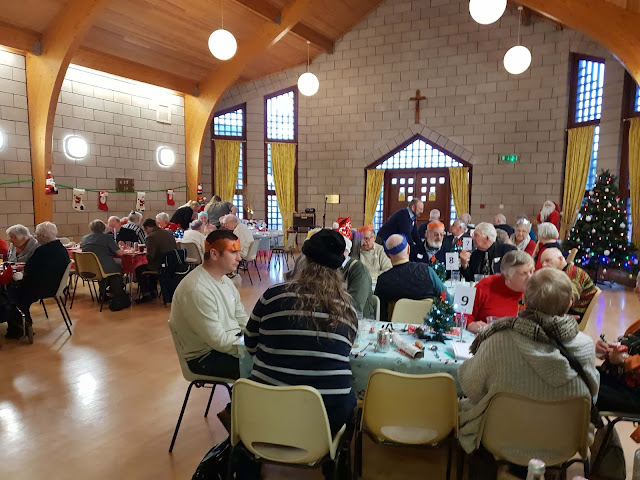 Was nice to see familiar faces from last year. Felt the event was not as busy as last years had been and it seemed to go quicker and smoother. 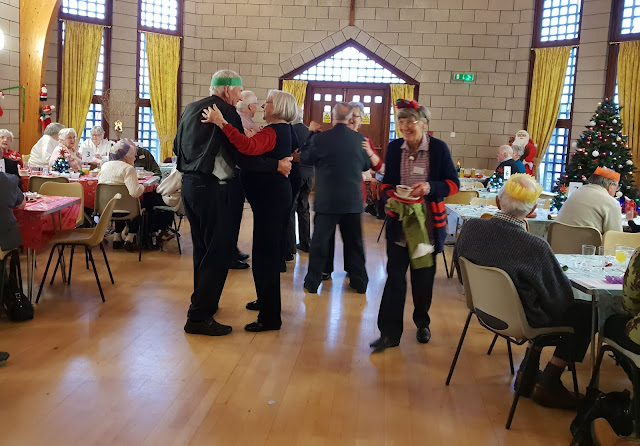 Have to laugh as hubby gets rather OCD about his sink and his dishes, and gets annoyed when other people go near or put things where he does not want them to be or do things in "the wrong way" it is quite comical. 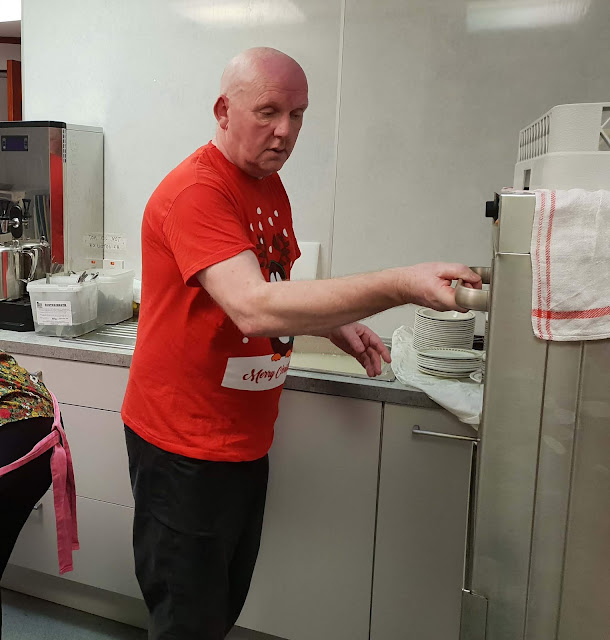 After the meal we had an entertainer.  Personally did not think much of him but he did a better job than I could have done. 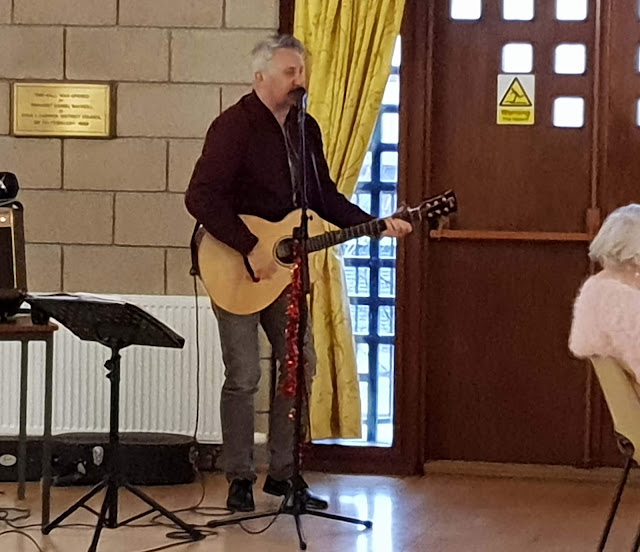 The entertainment was followed by Santa. The CEO of VASA that runs the event has a dance with Santa before he starts working. 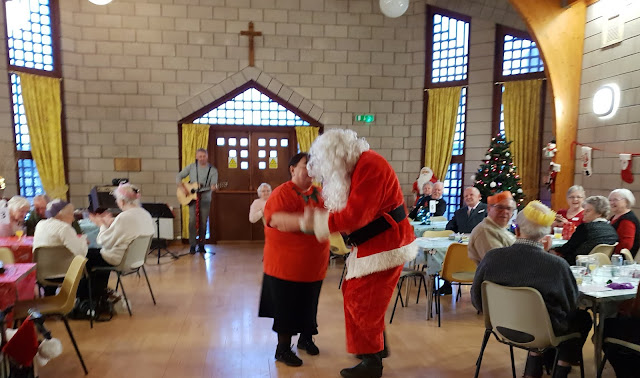 He goes round to each of the clients and gives them all a bag of presents
. 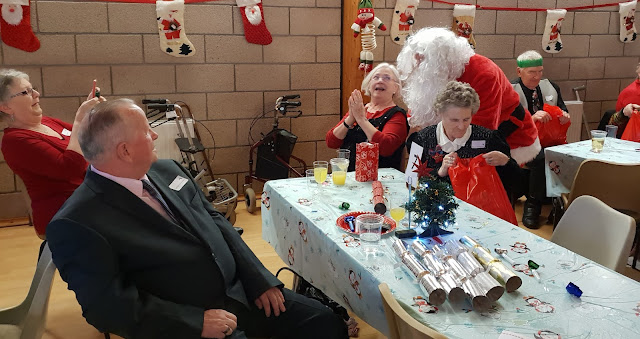 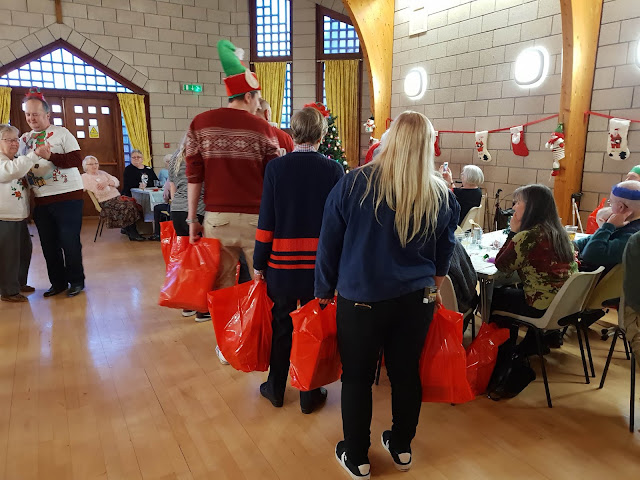 So on Boxing day we had our Christmas with the children. 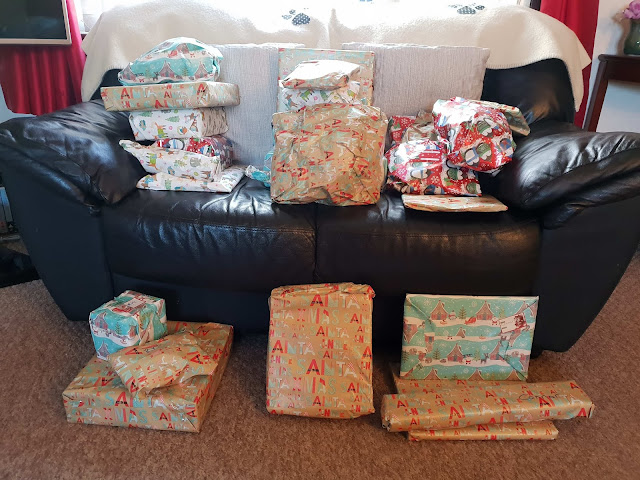 The dog is not keen on a room full of excited toddlers,and wants to chase them and play with them,  but the two girls get a bit panicky so hubby took Dixie out for nearly three hours.

So first off they got to open their presents from us and DD2. 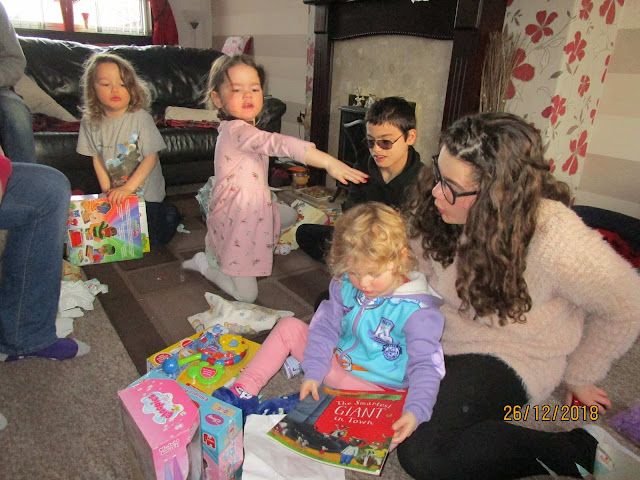 Then Fifi got to open a big one from DD3. 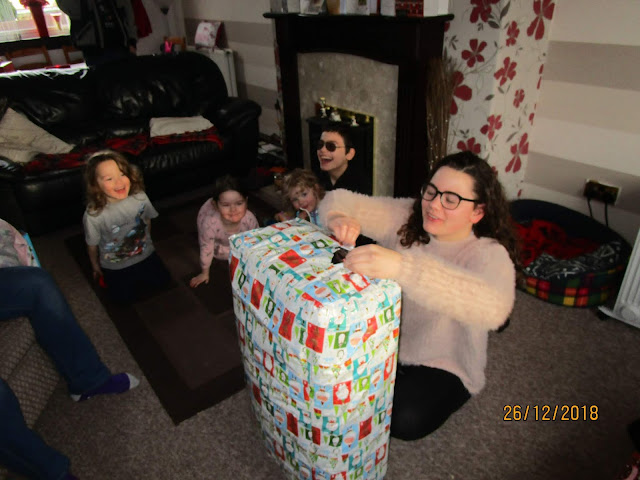 It is a suitcase so that she has one for when she goes off on camps instead of having to borrow one. It was full of presents for them all. So they set to opening these as well. 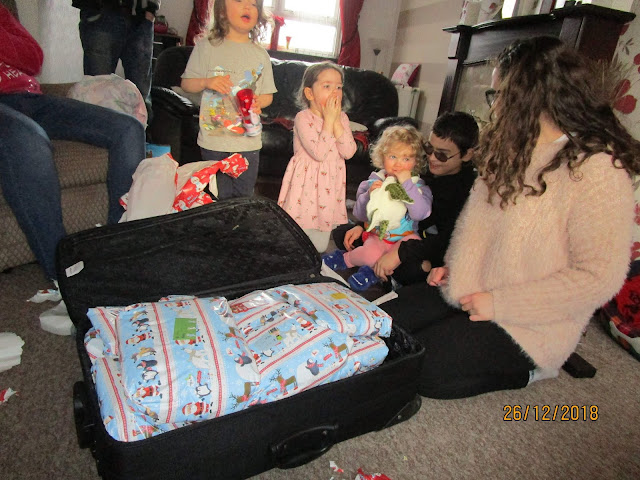 After present opening we had something to eat. No point in making a proper knife and fork meal so we had snacks, easy to eat and none time consuming. 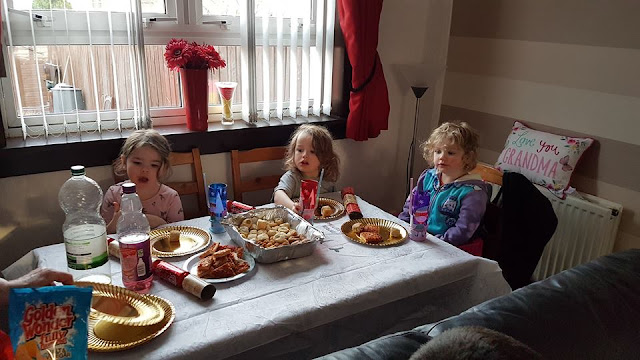 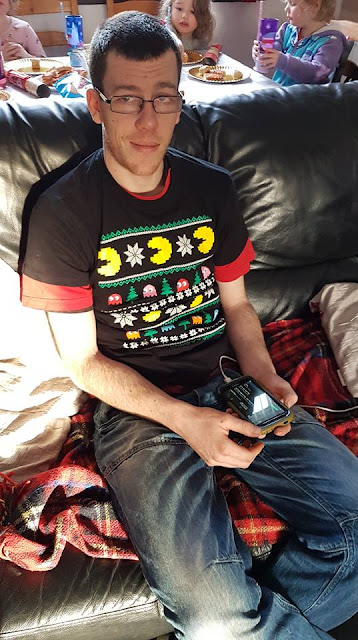 Then we sat and played games with the younger children. Spud manages with a bit of help and we pair up in need be so that everybody gets to play. 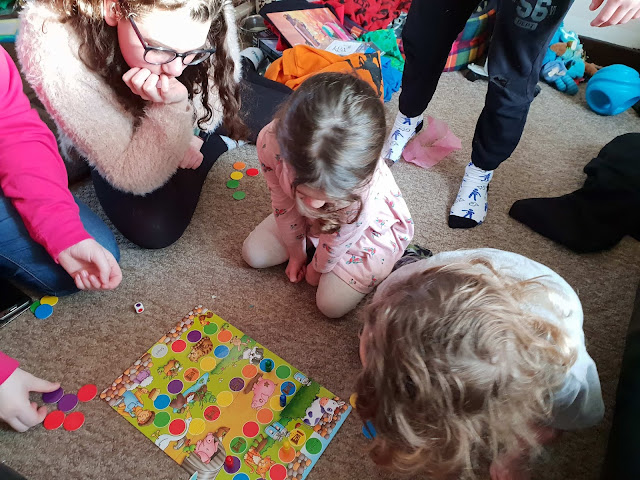 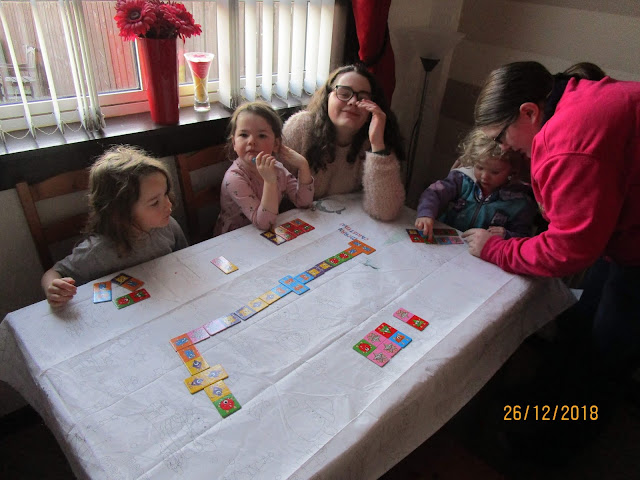 Bob spent some time reading a book he had got. 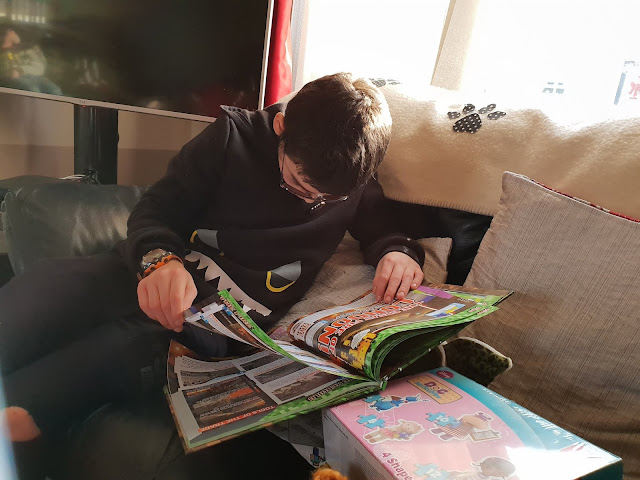 They got a PJ Mask game that required them to wear masks that enabled them to see pictures on the cards when they had the mask on but not when they took it off. 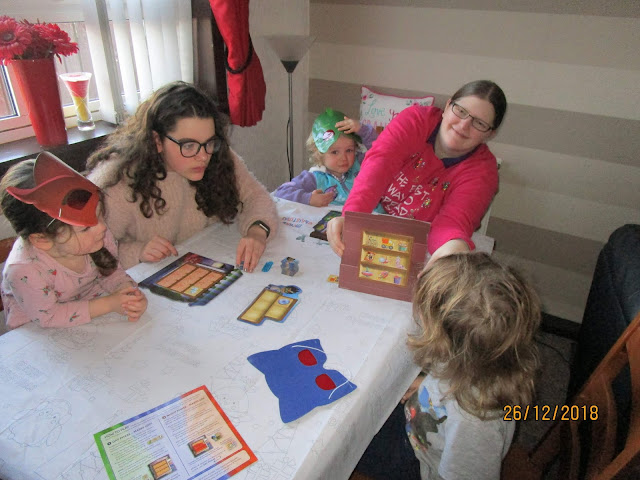 By now Dinky was beginning to flag as she was not feeling overly well. So we packed up all the toys and clothes and took them with us down to their house and went back up the road with the older two to play big people's games.

Once they had gone back down the road - just after 3pm we then change over and play bigger peoples games.Two seasonal favourites - exploding kittens and bears vs babies followed by two new ones this year - Beano The Sculpturades game, this was a new game, basically charades in Plasticine but a  lot of fun. We cheated and did every second round as a proper charade. 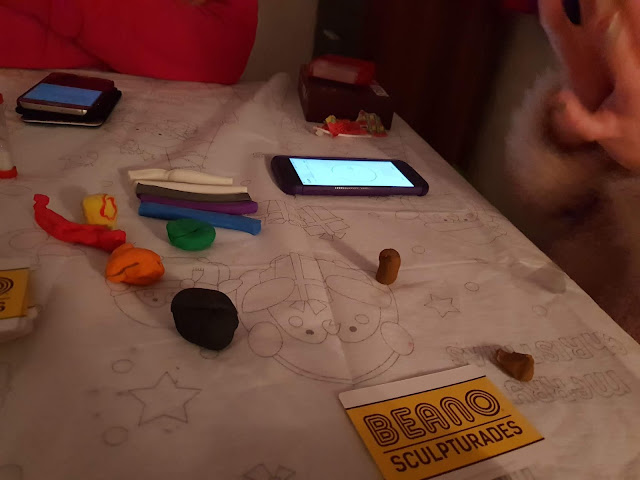 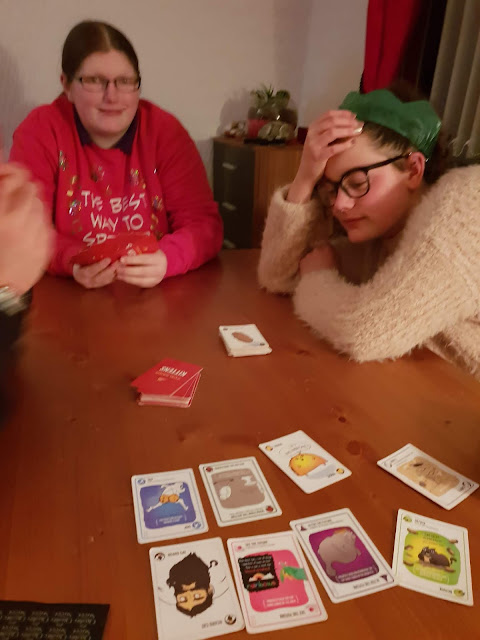 Hubby does not do playing games so him and the dog watched tv. 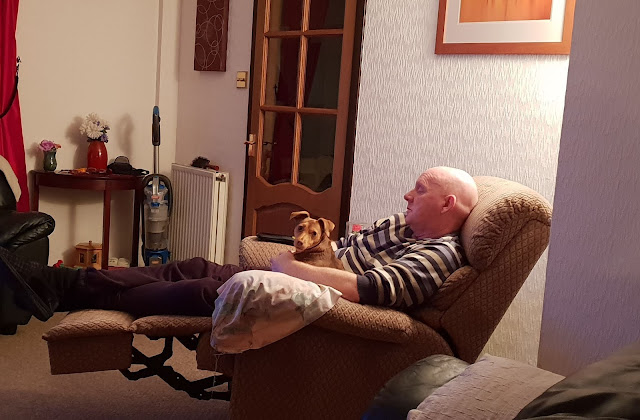 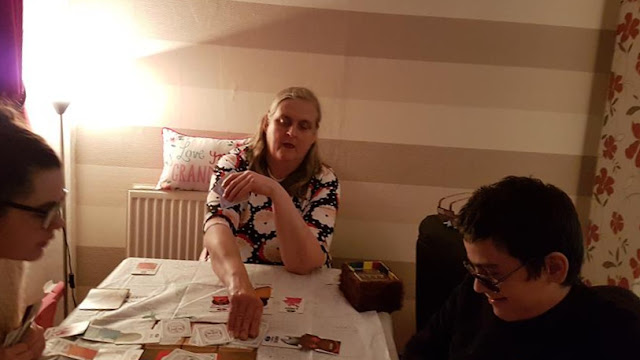 They went down the road just after seven as I think they had had enough by then and Bob wanted to watch a tv programme.


I hope you all had a good a time as we did.