Becoming the norm to only have overtime on a Saturday now but not Sunday so a walk round the fishery with hubby and dog. No time to go any further as it is dark less than an hour after I get in.

This one wandered over. 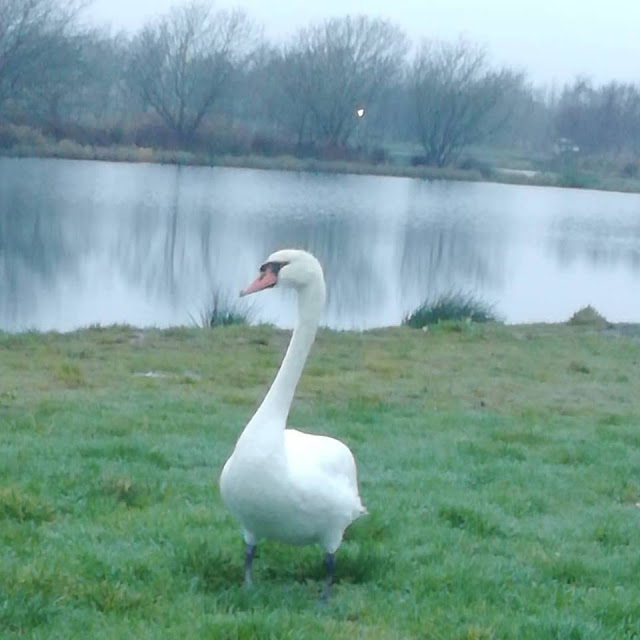 We remembered to take the prawn crackers out off the car to feed to the swans, they were not impressed so we crumbled them and spread them on the grass for the smaller birds.

Sat in the evening watching a film upstairs while I wrapped most of the Christmas presents. I would have done them all but I misplaced the refills for the tape dispenser. 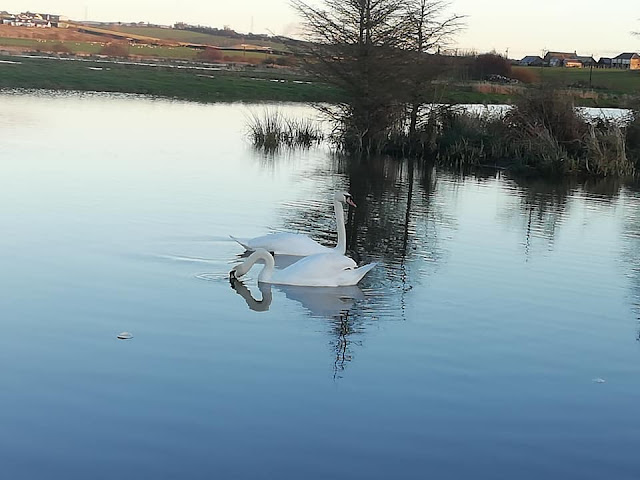 Much nicer weather, cold but dry so hubby took the dog further afield for a walk.I stayed behind doing house things as I had been in the town doing bits and pieces in the morning. Loved these decorations round the town centre, very environmentally friendly. 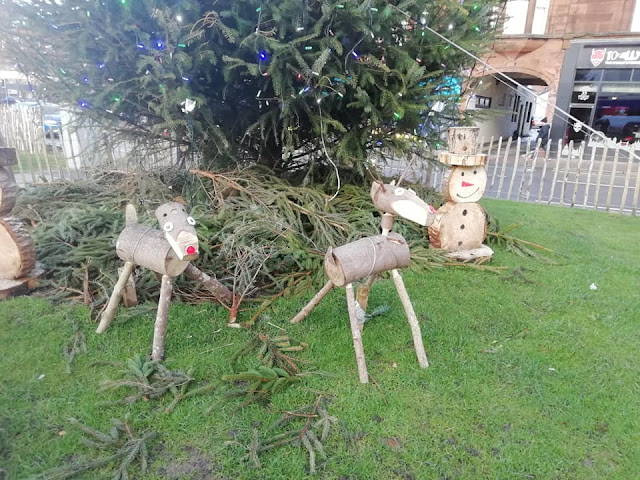 Rained all day. I popped into the poultry shop and topped up the freezer with chicken. Special offer I got five bags for just under ten pound, I had initially picked up four which were going to cost sixteen so adding a fifth apparently gives you a wholesale price so made sense.
DD1 not been feeling well this last week and she had phoned for a GP appointment but they only do one hour in the village a day and so her appointment was with the same practice but in the next village on. She was not up to driving herself so I took her and her husband watched the children.
Dropped my laptop off to see if the keyboard is sort able. Treated myself to a fold able keyboard that will make using the tablet for typing much easier and if my keyboard not sort able on my laptop then it will double up for use on there as well.

A lot of the neighbours have their displays on now, makes it a nice walk with the dog in an evening. 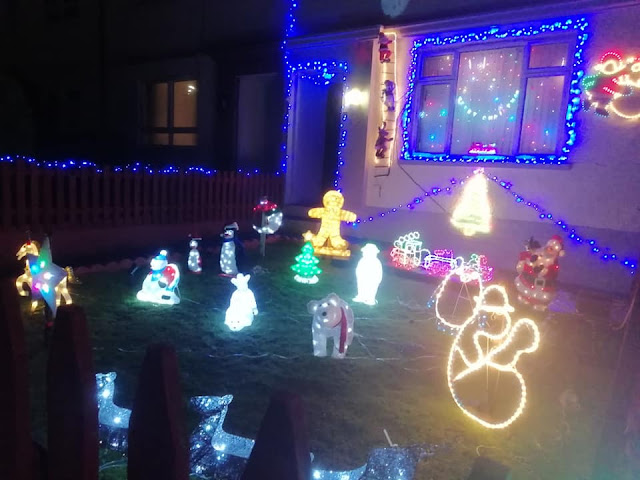 Finished the wrapping and have found both bedroom again totally upstairs now. DD2, SIL2 and Ziggy are down on Tuesday so had to be done, sometimes I get lazy and just shut the door on it all  thinking I will get it later, well later had come, only took another half hour.

Took Dixie dog to the vet and she had the one tooth out so hopefully that will help. We had planned on some shopping a wander round the charity shops and tea in 'Spoons thinking we would have to leave her till 5.30, the normal pick up time from the vet and as it was a 1pm drop off  then was not worth coming home But it was all over and done in less than an hour but we found what we wanted before going back to pick her up.

She barely moved out of her bed all evening, but was fine by the next morning. 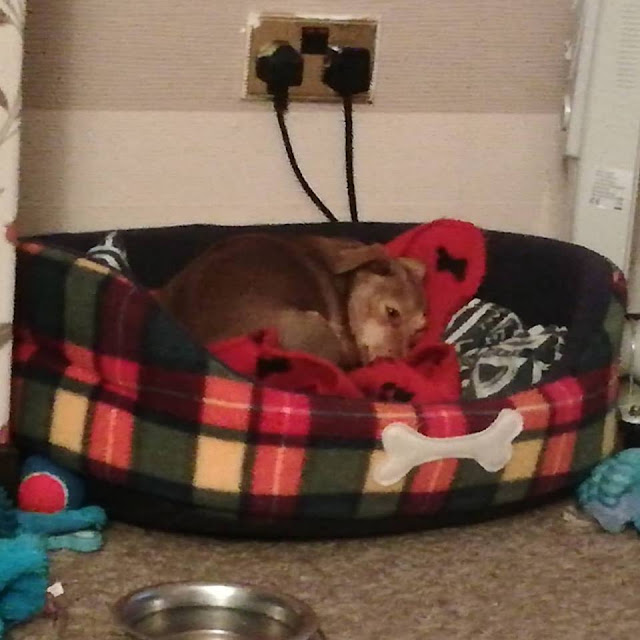 A quick blow round the fishery just before lunch time. I made a couple of cakes, not baked for a few weeks. Did an Irish barmbrack and a spicy fruit and banana loaf. I soaked the dried fruit over  night in some hot cola instead of tea for a change.

Had SIL and DIL round for a meal. They were up in Scotland visiting family who live nearby so stopped in at us first. Was a nice evening and some interesting conversation that has given me food for thought on an event that is due to happen.

They dropped off our Christmas presents and a home make Christmas cake as well. It is beautifully wrapped so will share a pic once it is unwrapped. 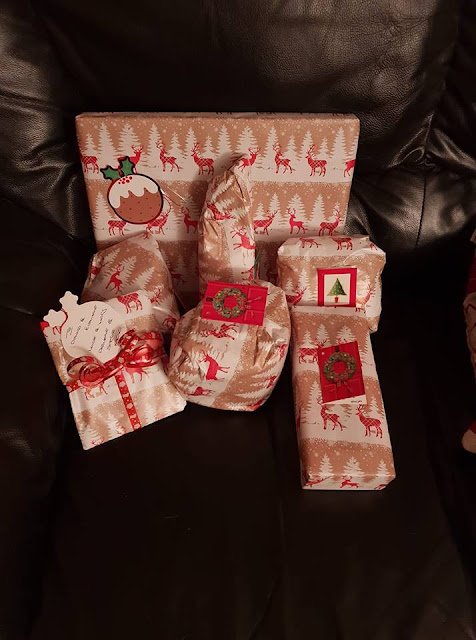 Hubby spotted this the other week in a charity shop, don't believe a word of it, could not be further from the truth!! 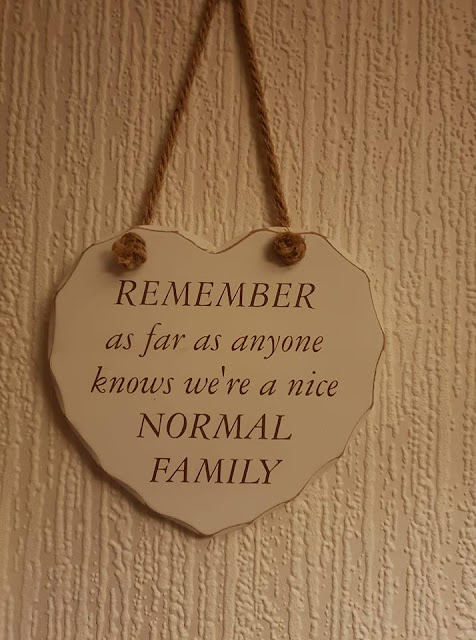