Not been a lot of out this week. Not been a good week health wise for more than one of us. Bob was at Dr on Monday for steroids but cannot get antibiotics unless he is hospitalised due to the other medicines he takes and the issues he has, but so far he seems to be holding his own.  DD1 has been bad again with tonsillitis and her ears. Been a crappy week for me as well with my blocked and sore sinus back, no voice to speak all week and peak flow dropping once again.

A day off work from my own shift so stayed in and had a lazy day and did some knitting and watched crap on the tv. One of the girls at work suggested some twin clothes for the hospital, so made two matching sets and going to make two butterfly blankets in the same colour.
In for a 4-7 shift, had agreed to both days this weekend before I knew I was off so did not want to cancel both of them.

DD2 is down for a few days before going across to her in laws and then away for a few days down south to meet up with Uni friends. Have to admire her going so far away from home with a newish baby, for me going out for the day with two kids was hard enough.
All Roo seems to do is eat. DD2 is still combination feeding, gives her approx 45 mins breast fed then gives her a 5 oz bottle which takes approx another 45 mins to drink and then starts again. At least here I can give her the bottles.
She is getting very smiley and chatty now.
We wandered down to DD1's to tire out Ziggy as she had slept in the car. She let me do her bedtime routine and went to bed happily. Have to say Ziggy was very jealous of me playing "raspberries and kisses" with Dinky as that is a game I play with her. She decided to snuggle in with Bob - something she never does.


Playing away quite happily at tea parties.

I was out in the morning. Hubby suggested a five mile walk when we were done, I said no thanks and went home and fell asleep instead.  DD2 spent the day down at DD1's and was then picking up DD3 from work and going to her house for tea so I saw little of them before 8pm. I made a bottle for Roo and took Ziggy up and did bedtime routine with her. I then fed Roo her bottle.

I popped into Greggs on the way home and pick up pies and cakes for lunch and a gingerbread man for Ziggy. DD2 had bought me the Christopher Robin film for Mother's Day and was wanting to watch it but Ziggy was not taken with it and chatted through it and over it so she did not get to watch it in peace, another time probably when Ziggy is in bed.
Sat and had cuddles with both the girls. Ziggy is very good with Roo and likes to talk to her and tries to play with her not realising that Roo can not play but not be long now till she will try and hold toys etc.


Here she is on her blanket

Made a GP appointment as back to this blocked nose, sinus pain, sore ears and lowered peak flow again. Three times in three months is getting annoyingly silly. So more antibiotics, steroids and a nasal spray. Have been using steam with menthol and my Neilsmed salt washes all week and is helping to clear gunk out. .
Beginning to wonder if it is either allergy related or if it is just not clearing up totally and is coming back again.Have been told if I do not feel it is totally cleared to phone and get a second week of antibiotics.
Took a wander along the flat cycle path with the dog and hubby and did some shopping while out any way.
Had friends round for tea.

DD1 went to her GP yesterday who told her nothing was wrong despite her throat being swollen and filled with pus and refused to give her anything telling her it was viral. This again is third time in three months for her. So tonight her hubby took her to out of hours doctor who did not understand why her GP had done nothing. I went and babysat, not hard as three wee ones were in bed and Bob played a computer game and I sat and knitted.

DD3 and I had planned about three weeks ago to take the three wee ones out somewhere for the day. Decided this was not a feasible idea today.
So they came up here and we sat and played board games and we had a indoor picnic before they went back down the road. SIL1 was starting work at 5pm so DD3 was staying to do tea, bath and bedtime with them to help out.

This is the first time they have played Tumbling Monkeys, this game was Bob's but he has well outgrown it.

I am now bored, nothing much happening, not a lot of sleep being got, little concentration and can't be bothered doing anything.

So sat at home playing with knitting. Finished off a set for Ziggy's doll that she asked for. Watched Christopher Robin from the start.

When she brings her doll back in May I will crochet some straps for the pinafore but need to know the correct length for them. Made a jumper to go under the pinafore dress and a cardi for on top as well as a hat. 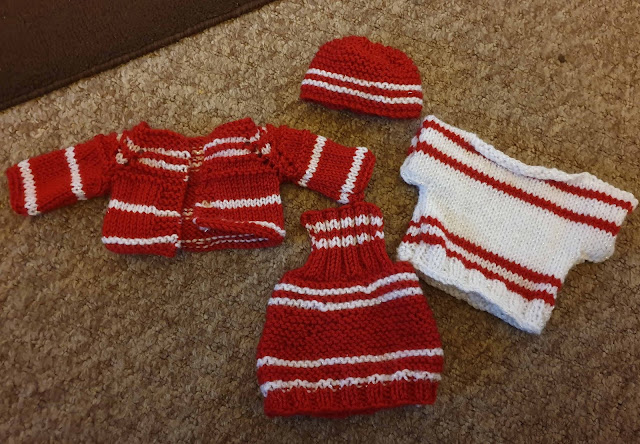 Despite a few bad weeks this year my mileage is sitting at 445 miles, nearly half way there.