Trying to be a bit more positive this week. The fact I have actually manage to sleep the last four nights is helping with that. Up to and including Monday night was just hideous, when it takes 15 to 20 minutes of rubbing at your arm and hand to stop the pins and needles and you are getting that every forty five minutes or so then sleep is impossible. When all you want to do is cry or chop your arms off then it makes for a long night.

Still struggling with basic tasks and still getting hubby to help with hot and heavy things.

Been out for a walk most days and been using the exercise bike in the house just to pass the time. Managed to do some crochet, a few stitches at a time, though the nearly finished item looks nothing like it should and I have no idea why not but it helped pass the time. Suppose to be an owl hat but the hat part is not head shaped in the least so wont be adding the eyes etc to finish it off but never mind.

DD3 suggested jigsaw puzzles so been doing one with hot air balloons on and listening to my audiobooks at the same time.

Lots of lazing around. Got a call from Ziggy. She was having great fun adding silly effects to herself and her little sister. 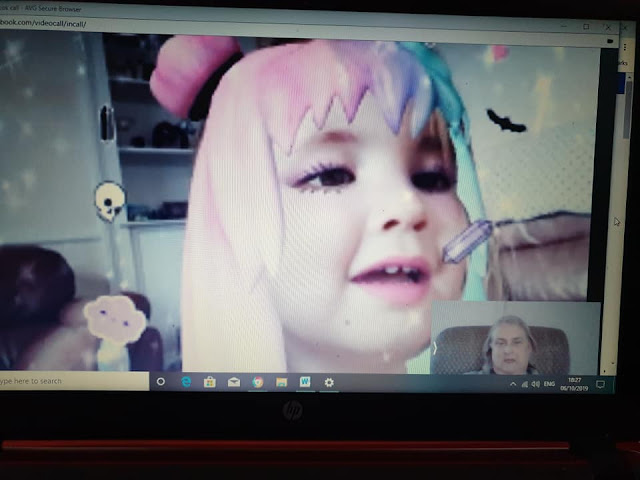 Not really sure what happened today as had no sleep for a number of nights. Don't seem to be any photos taken today.

Here is one from last week when friend was trying to balance treats on the dogs head, she was for none of it. 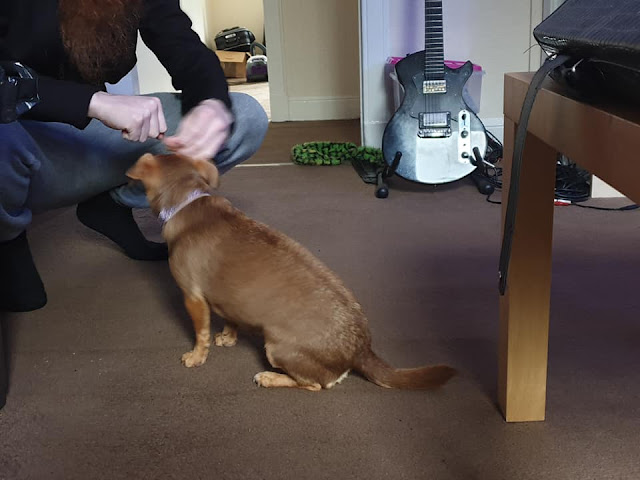 Had a phone call back from the GP and told my inflammatory markers were raised but not by much but my potassium levels were back in the normal range. This disappointed me as I was hoping that with the symptoms I have (six of the eight main ones) that low potassium was going to be the answer and a quick fix. 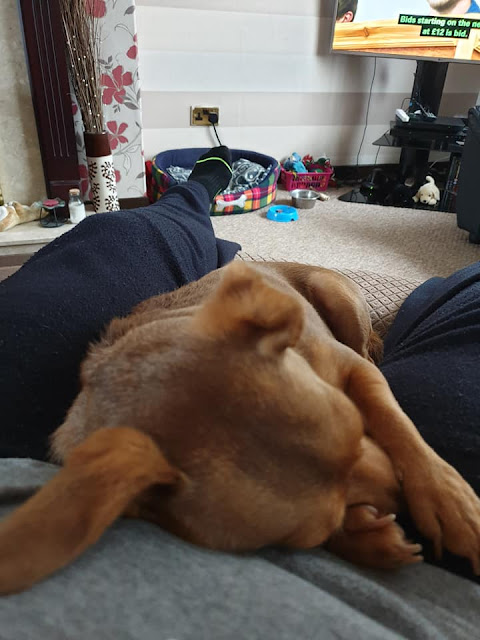 After yesterdays phone results was given an appointment for today to see the GP I have been seeing to see what the next stage is. He is as baffled as me and I felt just playing for time in hoping it will go away. He did ask me what I would like done next.....well sorry I don't know, if I knew that I would be sat in his chair not mine. Having had little sleep in weeks then I am not the most tolerant when tired and in pain. He says he can refer me to neurology but will wait months for an appointment.

He said he would discuss it with the others in the practice and phoned back and said they decided another full batch of blood tests might show something as my lost lot were done a few or so before this kicked off.
Took friend to his physio appointment, the hospital near my GP anyway so hubby played taxi driver between one place and the other and we fitted in a walk with the dog as well.   Friend needed a pile of paperwork scanned and emailed to his mum so I did it for him. 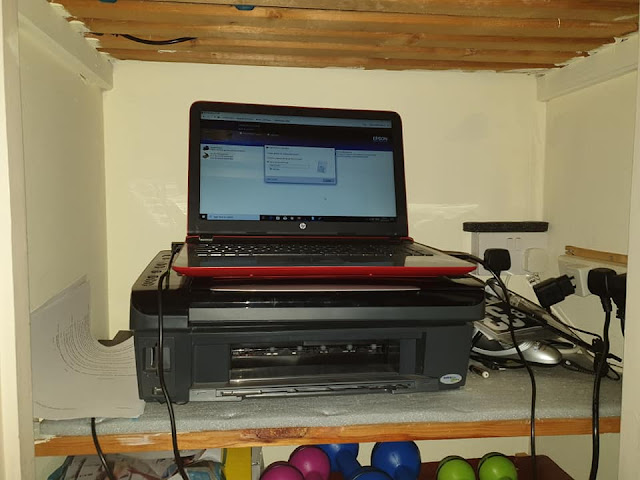 Had an occupational health appointment through work. Had put in for this when things started going wrong as never sure how long you will wait for one. But less than two weeks is not bad. He took a full history, that took a while....plus an idea of the last few weeks.....then did lots of prodding and poking and hammering with moving arms here and there, and he agrees with the GP, seems to be nothing major, for it to be both sides at once rules out trapped nerve, and that water retention and inflammation after three days of diarrhoea can cause the symptoms I have and it should go down in its own time.  Have to say was rather sore later in the day because of it.

Back into town to get more bloods taken later in the day.

While I was going in today anyway I did my helicobacter pylori test and handed it in. Two weeks for the results of this. 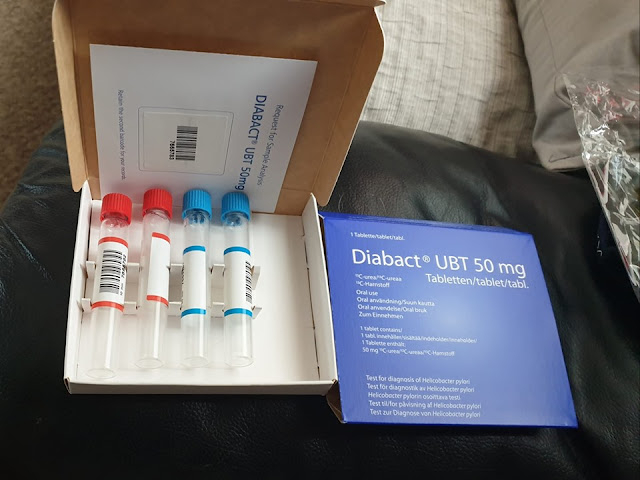 A walk round the park locally with the dog.

Went down to watch the three wee ones while DD1 picks Bob up. Was winding up Minky, sitting him on my knee and giving him kisses and calling him Grandma's baby boy....he was not amused...and kept trying to push me away. When Bob came in he decided he would be Grandma's baby boy instead then and came for cuddles. Quite nice at thirteen he still wants cuddles from Grandma.

Threw a sausage pasta bake in the oven so tea was ready when I came back. Very yummy it was as well.

Spotted these in the shop last week, yum yum. 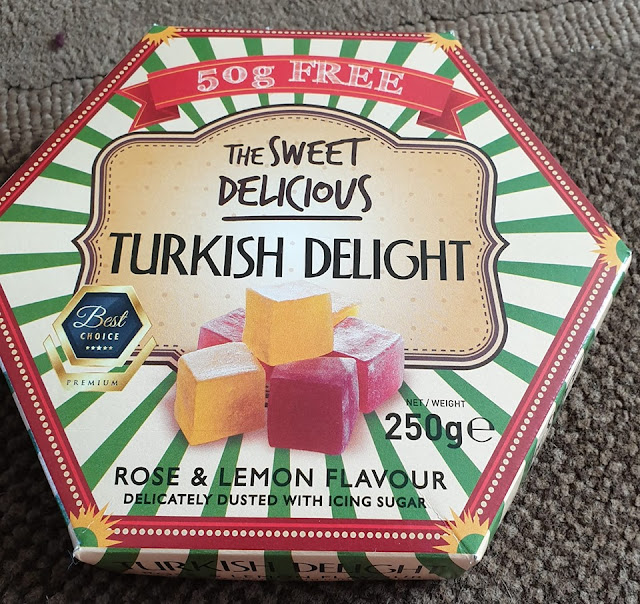 DD3 is away to a wedding today and dropped me off a few jigsaws on the way. Will need to hunt out the jigsaw board as DD2 and the girls are down on Monday for a few days so the table will be needed for them. Just as easy on the board and then slips under the couch for storage.

Always start doing jigsaws with the edges first, got as far as most of the edges and the bits with writing on.
Managed two rows of knitting spread over half an hour, hands think that was enough to be doing. 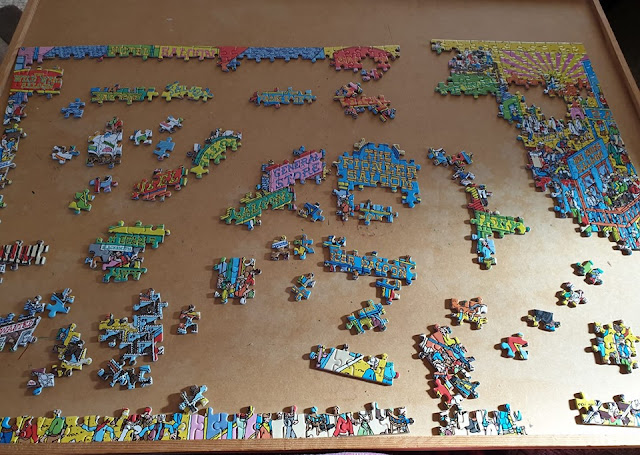 You are invited to the Inlinkz link party!
Click here to enter
Posted by fun as a gran at 19:18