This week has been about trying to get back into a routine and stop being so lazy. Been having late mornings and late night for weeks now as have had nothing much to get up for. Been using the exercise bike on the days I have not been out on an e- bike. Maybe only 5 miles a day but still exercise none the less. Still working on the same jigsaw and yeeeehhhhhh managing to get some knitting done. If I do a short stint and put it down at the first signs of pins and needles then it is not bringing back the pain.
Had a few nights with the pins and needles have been annoying and hands have been stiff more than one morning this week.

A run into town to pick up friend and take him for a walk along the beach with us. The sun might have been out but it was freezing, glad I had popped a hat and gloves in my back pack and had on a fleece jacket and a windproof on top. 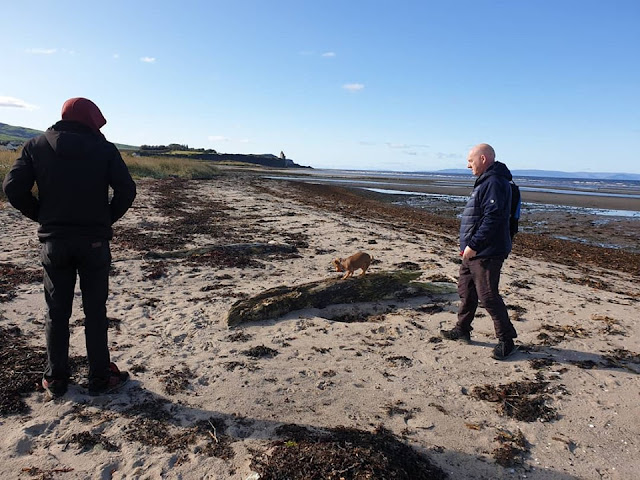 Into the town, dropped Dixie dog and hubby to walk along the river walk and go into visit friend while I went for a cycle ride. A nice fast paced 10.14 miles with a height gain of 273 feet. Sadly only four of us there, two leaders and two of us joining in, seems such a shame there is so small a take up when it is free and available to anybody over sixteen who wants to join in. This was along the beach road and freezing, but was a lovely flat calm mirror finish sea, ended up with my fleece hat under my cycle helmet to keep my ears warm.

This made me chuckle when walking past the school.....says animal feed...wondered with my warped sense of humour if it was next weeks lunches being delivered......but was informed it is bio mass pellets, guess the company has had to diversify. 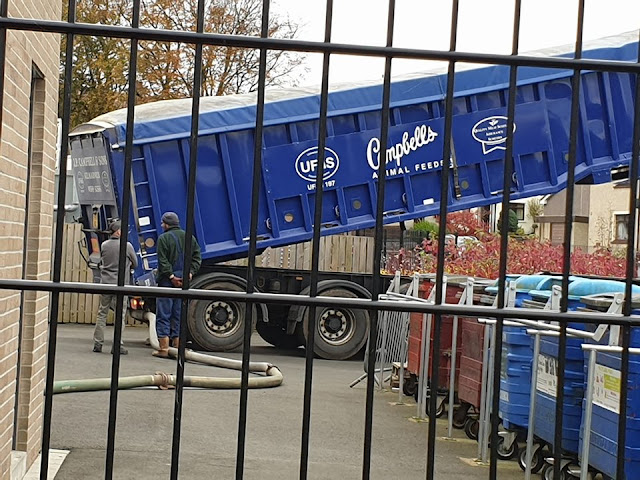 Another trip into town to a few bits and pieces of shopping and again hubby and Dixie walked along the river and pop into visit friend. When I had finished picked them up and hubby and friend finished off the coping stones on top of the wee wall they built last week.

Just needs the coating on all of it now. That will probably wait until next spring.

The pressure washer packed in, just stopped dead, been trying to get an answer out of Vax to see if it has an internal fuse.....asked me a hundred irrelevant questions and not answered the one I wanted answering. 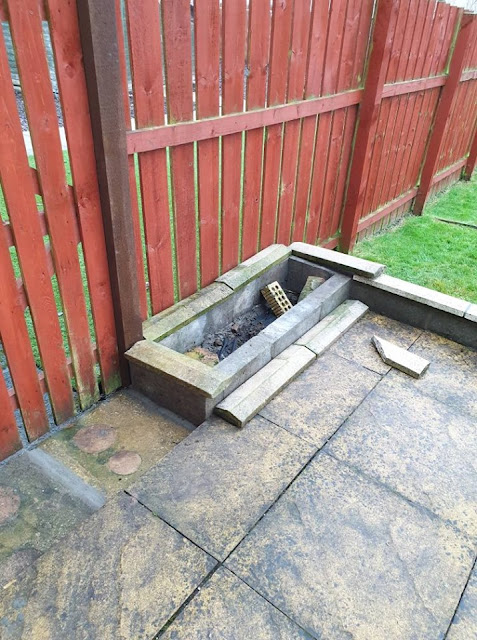 Went to pick up a repeat prescription, I had run out of  quinine last week, but think I had stopped noticing the sore legs with the sore arms but really noticed it on Monday night, probably not helped by the first outdoor cycle ride in weeks, while hubby walk Dixie along the river, the two of them like this walk. Popped in to visit a different friend and then  picked them back up from friends when I had finished. Home for a quick something to eat before I went into Kilmarnock to do my induction with The Active Travel hub and am now an official volunteer, soon as I have my volunteer number I can volunteer with any Sustrans rides any where in the country, and access any training they offer. They are still waiting for my references to come through but they won't be a problem.
Also joined in with a staff and volunteer ride, handy to get to know the cycle paths and have to admit Kilmarnock have much better routes open to them than we have in Ayr. A lot more country roads to use. I knew it would get dark while I was on the ride so put on my water proof/reflective trousers and jacket and was glad I did as it rained quite heavily for the second half of the ride. 11.48 miles with a height gain of 557 feet. Into a wee local cafe afterwards for a treat of coffee and cakes, sadly none dairy free so I just had a diet coke. 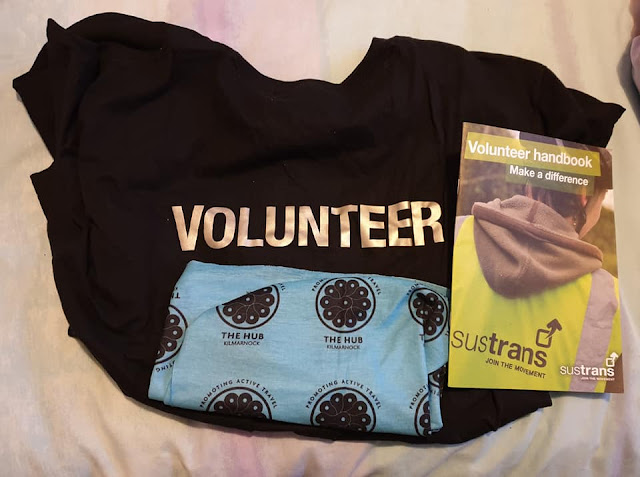 A day in the house. Hubby and I battered into the housework between us as not much been done all week. I then spent time doing my jigsaw while listening to my audio book while hubby was tidying his sheds and the loft.
Made a pot of lentil and veg soup for lunch that will do the weekend as well and froze some for later on. Only annoying thing is my hand blender does not work so had to eat it lumpy. Skint time of the month with it being a five week pay month so using up what in the cupboards.
Made macaroni cheese for tea, thinly sliced some tomatoes on top and pop it in the over to cook them while a few oven chips cooked.
Cleaned all the windows inside and out.This makes the job an awful lot easier. 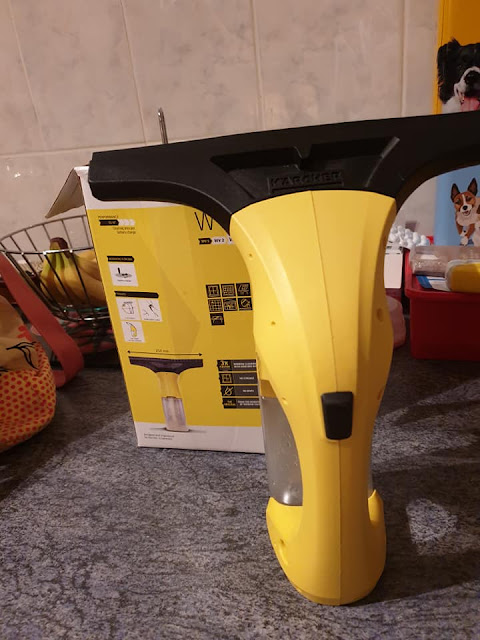 . Walked the dog while posting a letter. Back up the road and finished off the jigsaw puzzle off. Sewed up a jumper I have been working on for weeks and weeks. Knitting still makes my hands uncomfortable so not sure how much more will be done.

Hubby went and picked up friend as he was in a lot of pain and brought him back here and his mum picked him up just after 9pm. 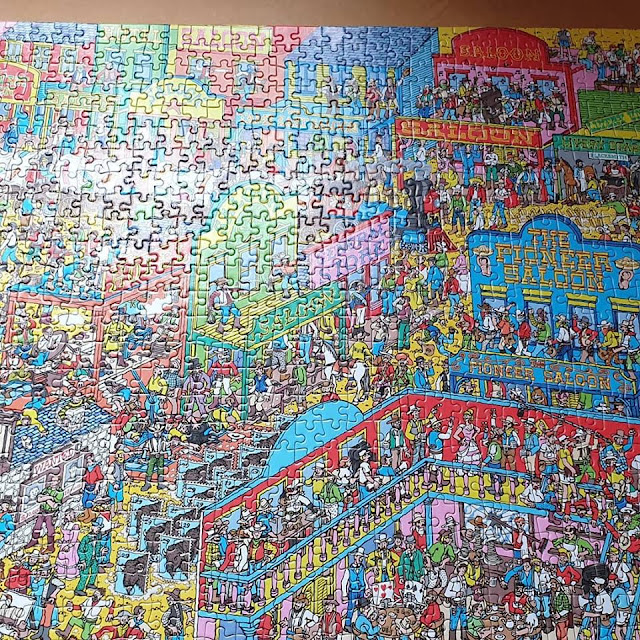 Back to work this morning, thankfully. Did struggle with a few tasks and a few others made my fingers and wrists sore but had somebody with me to help. Tomorrow will tell when on my own but know I have the back up of being able to move if I am struggling.

Spotted these wandering round the grass area when I came out of work, guess this is a case of the grass is greener. 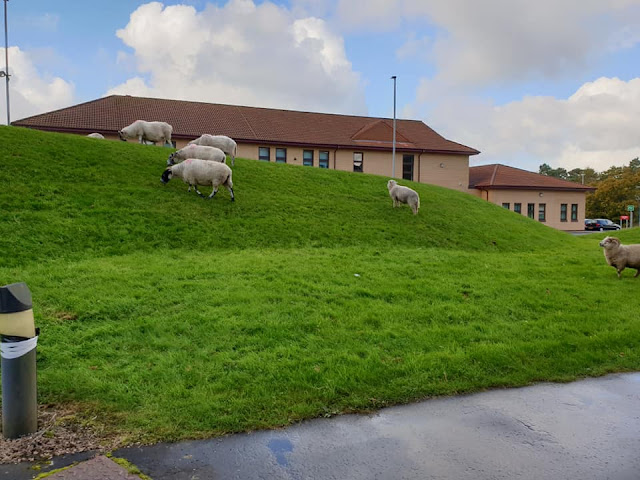