A lazy day doing more of the jigsaw and listening to my audiobook. Currently listening to The woman in the wood by Lesley Pearse. It is entertaining enough. Twins sent to live with the grandmother but one gets kidnapped.

We finished watching Carnival Row tonight, was ok, watchable but nothing to write home about.

Friend was down quite a bit of the weekend . Hubby have been working on trying to build a small wall in front of the repaired gate post, the main reason we wanted it sorted. They also tried some welding but it did not work.

Went to visit a local friend and she was showing me her extension, love the view she has.

DD2 is down this afternoon for a few days with the girls. Took her three hours to drive down, and Ziggy fell asleep in the car so took her for a run round the park to help tire her out.
Hubby went round to friends and I picked him up on the way back out the town.

Hubby went round to friends and I picked him up again on the way back out the town.

In the afternoon we went a  wander down the rather muddy woods, Ziggy wanted to go down to the bridge.Think she had been hoping to go paddling again like we did in the Summer.  So we walked down trying to catch leaves as they blew off the trees, we failed and she went in a huff. But we eventually got down there, and wish we hadn't, time we got back up again. She played on the swings, had some jelly babies, and then we hunted sticks out to play pooh sticks off the bridge with and then wandered back up again. We went down a rather muddy slope so decided to try the other way out, it was even worse, and at one point I ended up sat in the mud having got Ziggy through safely and going back to help with the buggy. We bribed her back up the hill with a jelly baby for every third lamp post we passed.

Hubby went round to friends and I picked him up n the way back out the town and we all took a  walk round a local park and then dropped friend back off again before heading home.

SIL3 came round after his work as hubby and friend had been trying to do some welding at the weekend  and not managed to succeed. SIL3 says the gates are the wrong metal and it will need a stick welder.
The gates will have to wait.


DD3 had been up for the day and took Ziggy down to DD1's. Wee Roo has not be overly well the last few days so DD2 stayed here with her and managed to get her to sleep for a while. By 9pm DD2 was rather worried about Roo as she has not had a wet nappy all day as well as her crying and raised temperature and pulling at her ears. She phoned doctors on call and took her up for 10.30. They ran various tests on her and were happy nothing serious were wrong. They said  she was dehydrated and to take her home and make sure she got plenty of fluids.

She was thankful she was here and not at home as her local hospital would not have dealt with her and would have sent her a ninety mile trip to their "local" children's unit. Not to mention the ninety miles back. That would not have been much fun for either of them.

GP appointment. Blood test results are all normal. GP has no answers to what may have caused this or what it is, going to be another mystery like my black thumb of last year. Helicobacter pylori test also came back clear. Currently the weakness and discomfort is primarily in the wrists and thumbs with the odd mild pins and needles in my finger tips. Hoping to build the strength back up now to get back to a more normal life.

A walk along the beach with the dog while we were out anyway.

DD2 and the girls are away to visit SIL2's family for the weekend.


Started listening to The Lake House by Kate Morton, - a heart stopping suspense and uncovered secrets - a missing child - that flits between 3 time eras. Positively enjoying this one.  Started watching Unbelievable on Amazon Prime. Was not sure I was going to enjoy it with the first episode but watched 5 now and enjoying it.

Got my exercise bike back in that has been in the shed since Monday, and my jigsaw back on the table to work on.

Managed to so some knitting, not pushing my luck but got the back of a jumper finished for Spud that I started weeks ago. Only had ten rows to go. Not wanting to push my luck as I can feel it. Same with carrying a mug, I can do it but not comfortably. Still getting hubby to lift hot heavy things for me. Pain just in wrists and thumbs now.

Hubby and friend went down to visit a relative of hubbys locally.

Had three small spots on my stomach a few weeks back, they seemed to have disappeared. But one flared up and I used an antibiotic cream on it and again it seemed to heal. For some reason it flared  up again on Thursday so bought this hoping if there is something in it it will draw it out. 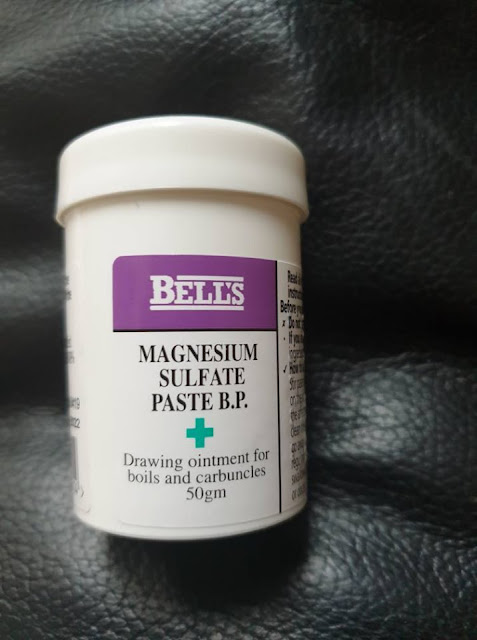 You are invited to the Inlinkz link party!
Click here to enter
Posted by fun as a gran at 19:11