We have started watching Series 5 of Outlander, I watched a 4 part series called The Bad Seed - tells the story of two brothers from a dysfunctional family, tried various others and watched half an hour of this and half an hour of that as I could not get into others I tried. Watched an all right film for a boring day at home -  A Prayer for Mary. Took a notion to watch Watership Down but you need to pay for the film version, I could find a 4 part tv version of it but could not get into that either.
Been enjoying Millionaire but apart from that nothing much different.

Have to say I am quite glad Scotland has kept us locked down a bit longer, will be interesting to see if there is a spike, make Nicolas next decision easier based on the stats in England for us at the end of May.

My usual shift at work. Had decided we were going to have a Chinese as a treat but time I finished work I was not feeling to great, sore throat, itchy mouth and was to sore to consider eating anything. As the evening went on my tongue started to swell and my throat got tighter and the itching in my mouth got worse. Took piriton and ended up sleeping with my epi pens next to the bed in case it got worse over night, thank fully I got away with it but only just.
Never quite sure at this stage when to use them. It is obvious if it is an instant reaction, but always ponder should I use them when it creeps up before it gets very very uncomfortable and then phone an ambulance and take some help and advice,but that seems a waste of resources as not technically an emergency situation. Had this problem more than once. Maybe I should just to ease the reaction quicker? Maybe need to go and have a discussion with the pharmacist.
Have to say really fed up of these allergies having such a massive impact on my life.

Managed to spill my breakfast into my knitting box, overnight oats, fruit and yoghurt -  toast would have made a lot less mess  - this was just some of what I rescued for rinsing off. The stuffing bag got thrown away. 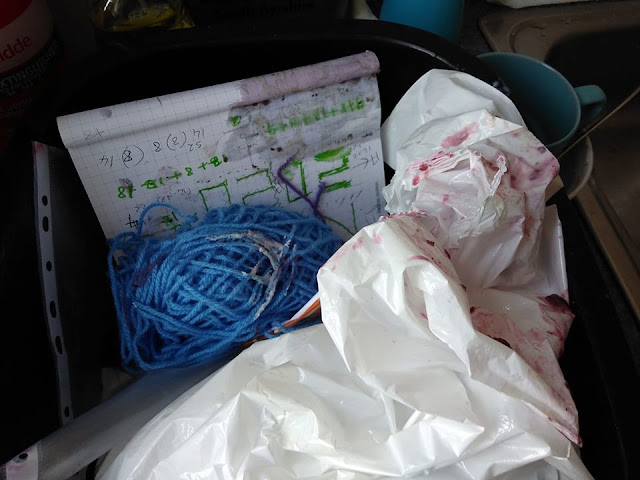 More piriton to keep the reaction down, itching in the mouth was better but throat and tongue still sore. Walked the dog and did some knitting.

Face timed with DD2, Ziggy and Roo. Roo is doing well with her speech. 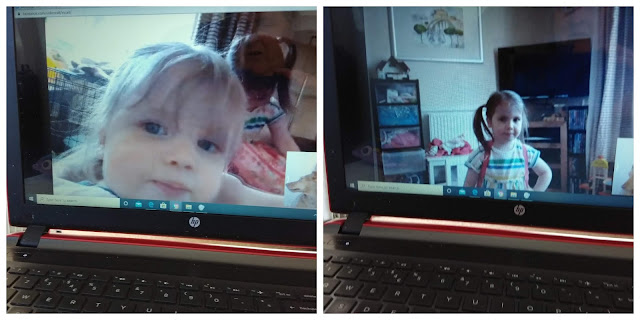 Tongue feeling a lot more comfortable, throat still sore and hoarse. Same old same old today. Found a butterfly while out for a walk. Was trying to get a decent close up but it flew away. Makes for an interesting shadow of it. 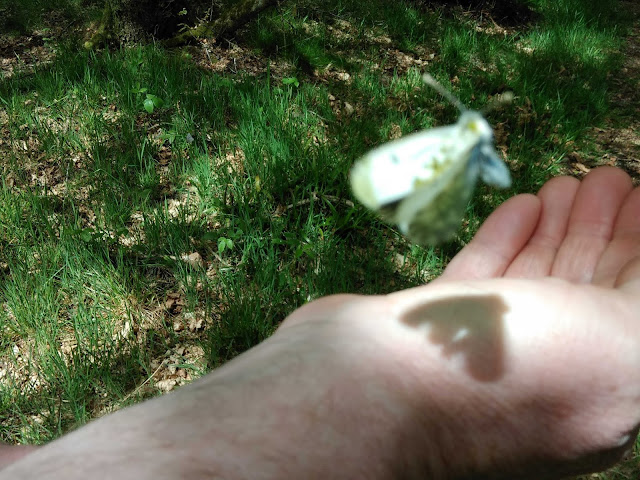 Had put in for a repeat prescription last week. These two are the same tablet, just in different packaging. No wonder people get confused and take the wrong tablets. The white packet is the new one and looks exactly the same packaging as another tablet I take. Have had to write on the strip what they are. Maybe I should leave them in the boxes but cant be bothered opening a packet, taking the required amount out and then popping it back in, I just keep one strip of each in the top drawer to make my life easier, or more lazy!!
A walk with the dog and knitting again. Took some video of walking along the paths through bluebell wood to share the beauty of it at this time of year.

Spoke to Staff Care today about the issue at work at the weekend and she is going to speak to her consultant and get back to me with her suggestions. 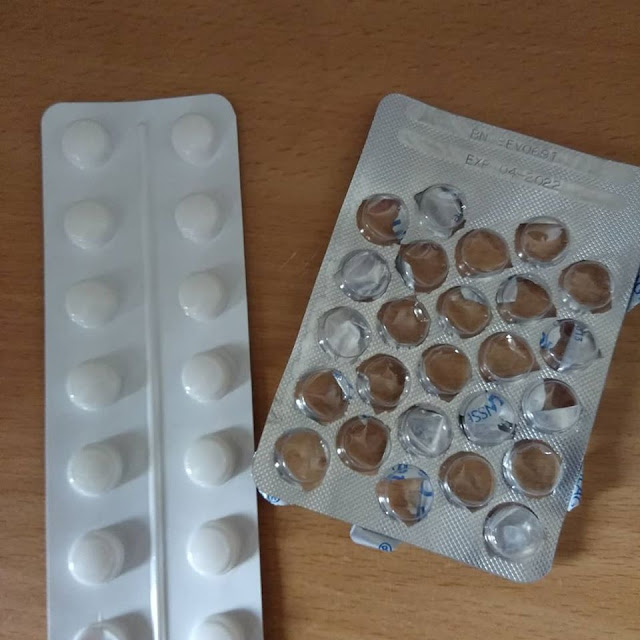 Staff Care phoned back and the consultant agreed with her it is not safe for me to be in at work wearing a mask. So going to speak to my line manager on best way to deal with this. They will arrange for allergy tests at some point to see where the problem lies.
Line manager has put me onto medical exclusion until they decide on how I can work safely.

Yes you guessed it more knitting and a walk with the dog. Got the bigger owl finished, just scaled it up to allow for what will become history in the writing. 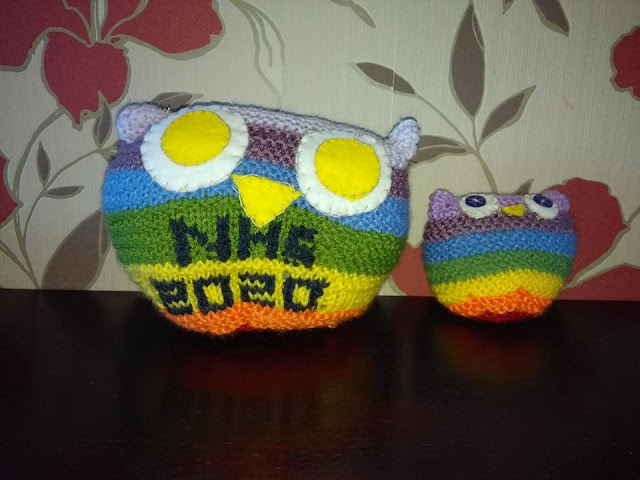 Thankfully now my throat is feeling better, still hoarse at times but fine apart from that.

Hubby had to go for blood tests this morning to see if the new tablets they gave him have helped to lower his blood sugars. Decided while in the town anyway to get a few bits of shopping, nothing desperate right now but to save me a run back in next week.  Drove into three different supermarket car parks but the queues were ridiculously long so just left again.

Walked the dog along the river while we were out as well. Got some video footage of a cormorant fishing, and some tiny fish swimming about it the shallows as well. Not something you see every day.  Will pop them onto a blog post some time this week. Also spotted a heron near the cormorant. 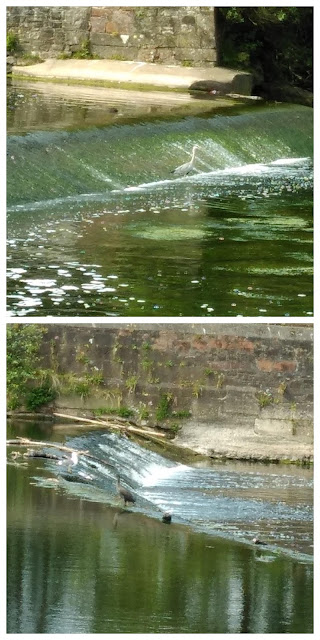 Sat around waiting on the rain that had been predicted and looked like it would be here any time. I was fine I was knitting and watching rubbish on the tv. But still had not rained by 2pm so decided to take the dog a walk. We decided to stay close to home but withing a few minutes of us leaving the sky was blue so we went down the woods again. The river is very low as we have had no rain to speak off for weeks. Went down to the bridge and took a few photos. Dog went right under and along the banking on the other side. We probably could have as well but a lot of bricks have fell off the bridge and it would have involved to much clambering,  maybe another day at the start of the walk. 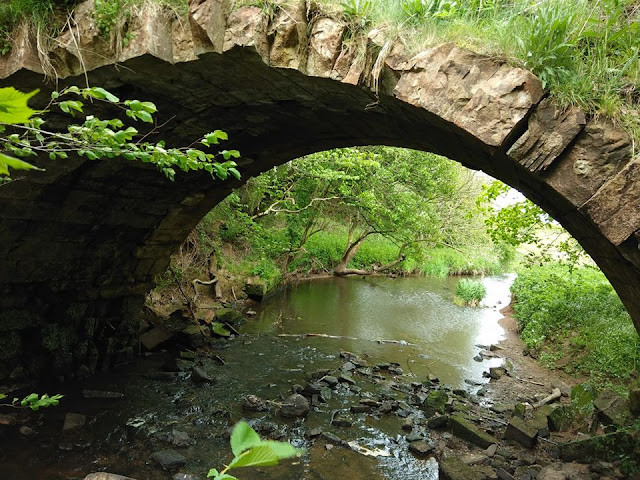 You are invited to the Inlinkz link party!
Click here to enter
Posted by fun as a gran at 10:20