Well in Scotland we have got some more freedom than we had last week but does not mean I am going to be doing anything risky. Just because Nicola says I can visit family does not mean I will be. Three of us work for the NHS, two of us in a hospital and one in a clinic but she has to use public transport to get there. If I go and sit 2m away from the local grandchildren they are going to want me to play or they will want cuddles or to sit on my knee and that is putting them at risk, so it wont be happening any time soon. I also have to consider that the other grandparents will also want to visit, so if I give it to the grandchildren they may well pass it on. Also Bob is still covered by his shielding letter.

Weather has been far to warm this week for a day time walk but time evening comes the woods are full of midges.

A late start at work again today, think this is going to be me until we can either find a suitable mask or there is no need for a mask at work, a late start gives time to do things before work, an early start after work so does not make much difference to me. Just happy to still be working.

This is the only picture I took today, the latest in my Rainbow of hope series, this one is for Fifi as she loves cacti. 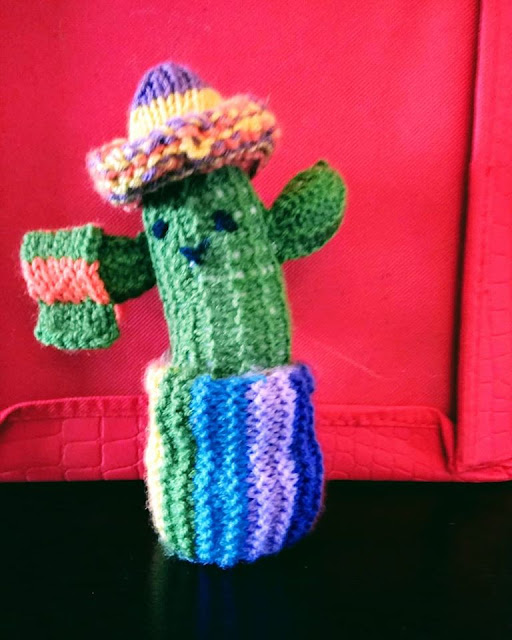 Housework and a walk with the dog and some crocheting.

Changed over the seven tog winter quilt for the four tog summer one, until it gets to warm for that and we just use a quilt cover.

Got the quilt and two other loads of washing done, out and dried.

Also put the oil heater up the stairs and brought down the fan. 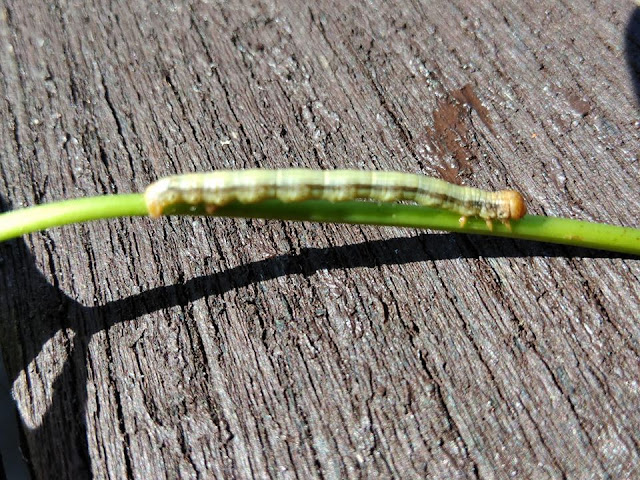 Today a repeat of yesterday.

Trying to find a new series to get into but cant find anything that appeals ten minutes of one thing fifteen of another, again my mood rather than the quality of programme I think.

This lovely little treat came through the post today, a lovely gesture from Fifi. Really brightened my week up.

Got a message I had won a voucher in another "tag your NHS friend" I was nominating by the same person that won for me last week. 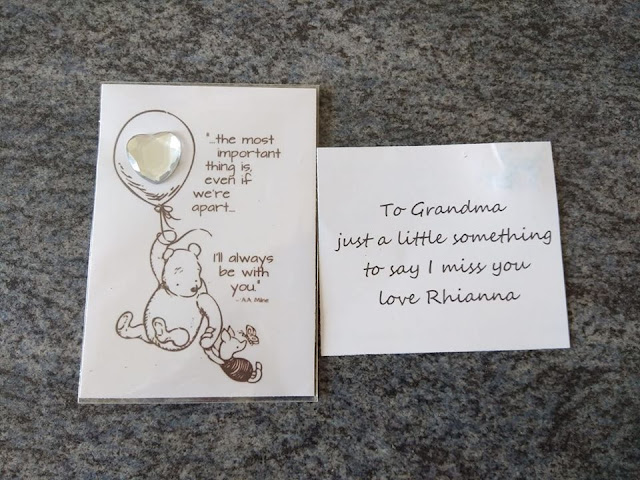 When I turned the tv on this morning all we got was a flickering picture on, off, on, off, a second or so at a time.

I took a video of it and sent it to LG and they suspect a bulb is away, far to expensive to sort so bye bye tv. We won it four years ago so four years of free tv was ok.

By this time we had brought the old one down, and by the time we tried to fit it to the stand and realised it would not fit  it was gone 1pm. This left us with the dilemma of a stand as we bought the up right stand for the tv we won and we gave away the old table type stand we had. We hunted Facebook Market Place and found one localish so we went and picked it up, they had put it in the garden for us.

Went for a walk while we were out, a different part of the river walk to what we normally walk.

Had a phone call from work to see how last weekend went, and to wait on a phone call tomorrow with an update. 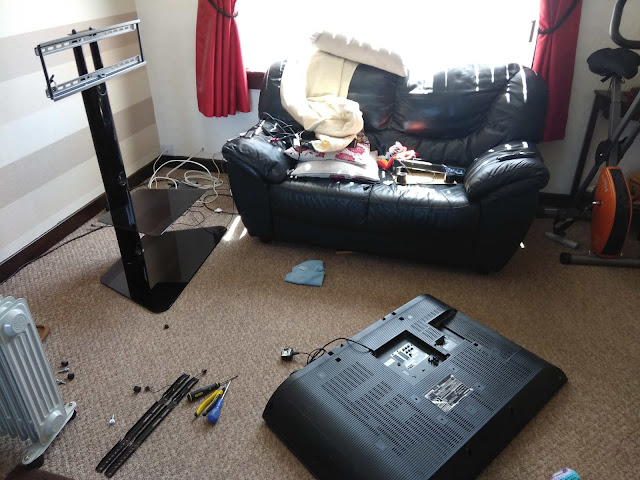 The day just seemed to disappear, no idea where it went or what we did apart from an evening walk down and round one of the fields with the dog.
Phone call back from work saying they have sourced a different type of mask for me to try same as last week.
No crafting in the last two days at all.


I got this today, a nice home made bag from the Facebook friend who keeps wining competitions for me. 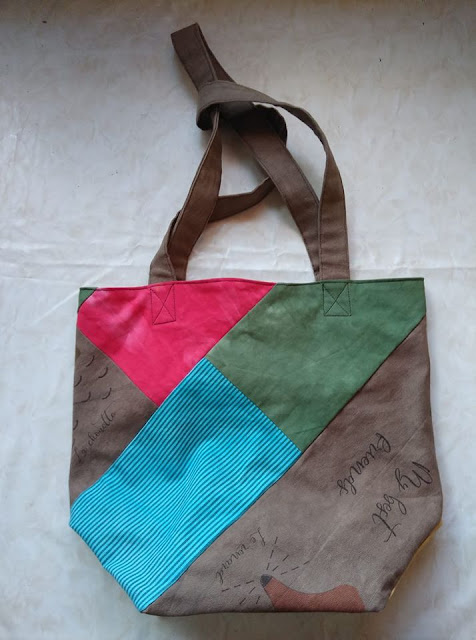 Had a prescription to pick up so combined the day with a walk and some shopping. Sadly the queues were massive, and then even more massive at the first two supermarkets and way to warm to stand out in a queue. So went to the industrial estate where there is a choice of three shops, one of which had no queue so in I went, but hey seemed to have stopped social distancing and the queue was inside, maybe thirty deep at the check out, but was better than being stood out in the sun.Time I got out they had somebody on the door gain with one in one out.

Just picked up the stuff we needed to tide over the weekend, will worry about the rest next week, will probably add it to DD1's delivery.

DD1 had wanted eggs and jam, could not get her eggs, but we have one lovely local woman that keeps chickens and does not eat eggs, so messaged her but she had no egg boxes, I did have so took her my empty boxes, pick up half a dozen eggs, dropped them at DD1 along with the jam and picked up bottles pf sparkling water that came with her shopping for me along with a few tins of beans. Spoke to the three wee ones while I was there. They had been in the paddling pool.

The weir walk we did yesterday, don't think I took any today. 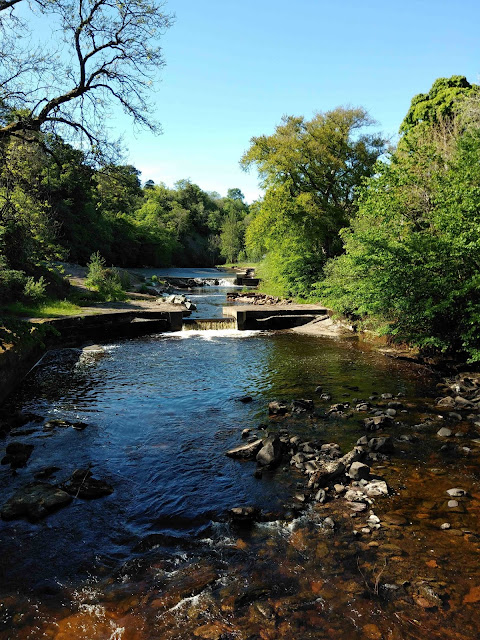 Saturday
Meet Vincent, a rainbow sausage dog, hubby wanted one and he also named him. Will need to try and find a knitting pattern if I do another one. 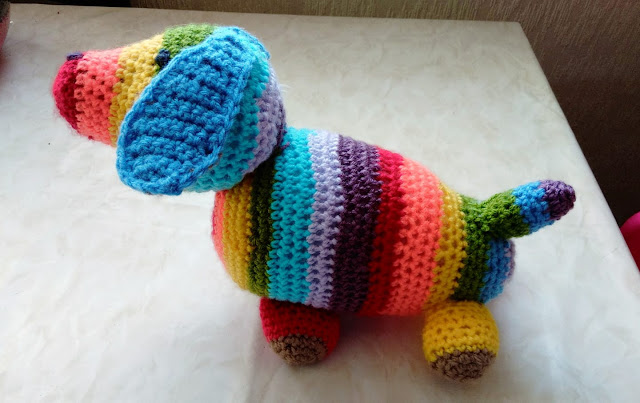 You are invited to the Inlinkz link party!
Click here to enter
Posted by fun as a gran at 07:51