A day off work. Spent it doing the same old things. But did get round to making the cake I was making on Friday.

Got the two dolls finished, they are for Spud and Dinky.

Amazes me how trees manage to grow on the rocky parts but I guess erosion has worn away the ground over the years. 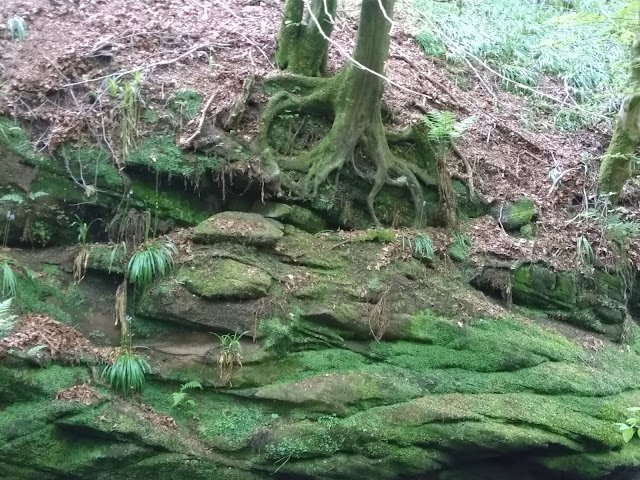 Listening to audio books, the end of Things We Never Said by Nick Alexander, an enjoyable novel based on a series of cassette tapes and photographs the wife leaves to her husband to read and look at after her death from cancer, and doing diamond art painting. Then tried something new with crochet. Time will tell if it works.

Had a laugh at a bit of a memory. We bought our first microwave over thirty years ago. The girls called it Ping, because it pinged when the time was up. Years later when I bought another, smaller better one, my by then ex took it. Well DD1 messaged me to say Ping has finally pinged it's last. RIP Ping.

Had gone down to DD1's to go and post a letter for her and picked up some coloured big hugs that the three wee ones had made for me. Spud had put a monster on the back of hers, but she has hidden it's eyes nose and mouth to protect me, and now it has gone boom into space. 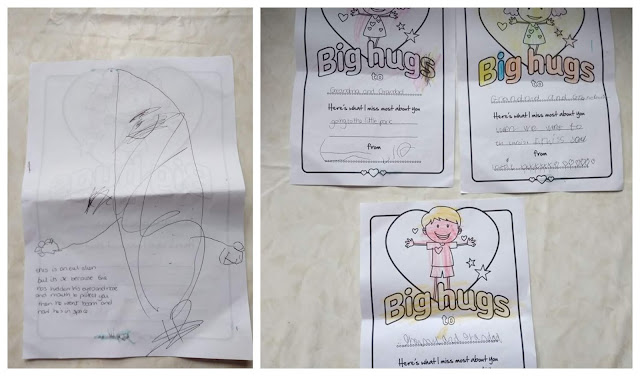 Had a slow morning, was up just before six as for some reason these days I seem to have a lot of weird dreams, nothing scary just really weird, usually involves people I know or family members but the ages never work out with them, seem to mingle the kids and grandkids in combinations that are not possible.

Finished off the diamond art picture while listening to a new audiobook, Good Little Liars by Sarah Clutton, will let you know what I think later on.

Went to Morrisons in Troon to do a few bits of shopping I never got last week, hoping the queues would be shorter and if not hubby could walk the dog on the beach while I was shopping. Forgot that all the beach car parks would be blocked off and hubby did not think to park in the supermarket car park and walk the dog.

So got my shopping and then parked near the cycle path for a walk instead. It was drizzly but did not really rain.

Started watching Dreyfuss on Prime, watchable but not stunning, another one of these "specialists" helping out the police type programmes. 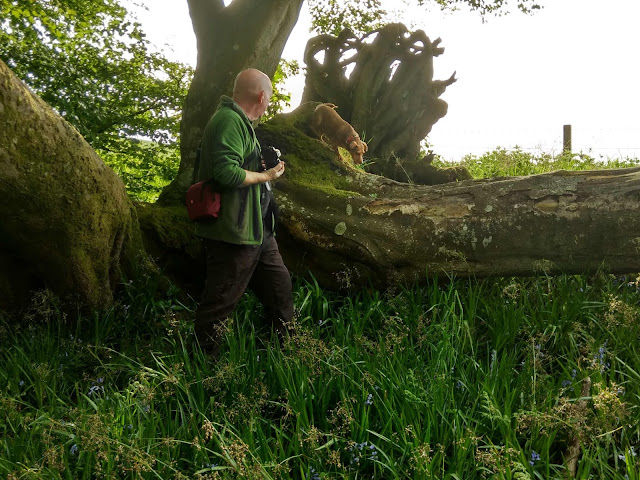 More audio book and diamond painting, got 3 bags of beads done on Bob's one, only another 31 bags to go.

Finished off another rainbow baby and started a NHS worker, have 3 more of these needing done.

Had a zoom chat with the other cycle/walking volunteers. Learning about up coming things they have going on as well as catching up with how the others are fairing.

Walked the dog and found some caterpillars.

Have a chat with neighbours either side and a friend along the road, all at different times of the day.

Won three Facebook competitions today, two of them were nominate NHS workers. First was a £10 amazon voucher, one for me and the colleague who nominated me. Mine went on cable ties that were in the basket waiting on pay day. Second up was a stainless steel tea pot and two mugs, again a nomination and  thirdly was a runner up prize of 50% off on a vape site, no used to me so was used by somebody else. 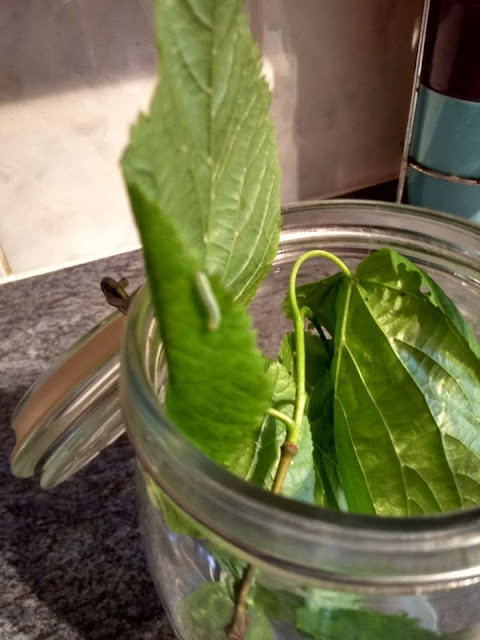 A lovely sunrise just after 4.30 this morning.

Hubby did more gardening, I did more kitting and tv watching/audiobook listening.

Had a chat with next door, their wee one through in our garden, and he loves playing in water, he was very good at finding it all.... found a watering can, a bucket with water lying on the lid, and the dogs water bowl to play in.

A couple of phone calls from Staff Care to see how I was and to update me on the plans for this weekend, they have different types of masks for me to try and see what happens. Fingers crossed.

Popped the dog in the car and drove a few miles to a different piece of woodland to walk in for a change. 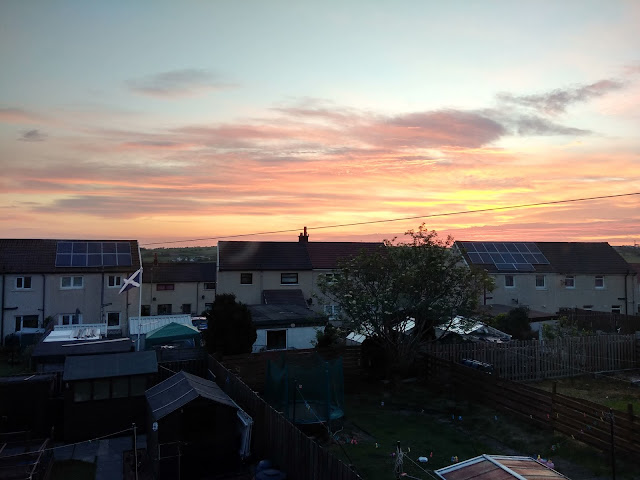 Made an early start, rain was due to come in about 10am, walked the dog and picked up hubby's prescriptions.  Home just after ten and yes it was spitting, to some social media and more knitting and TV.

My tea pot and mugs turned up, well they turned up yesterday originally but we missed the delivery while in the garden.

Rotating between Dreyfuss and Unforgettable on Prime. 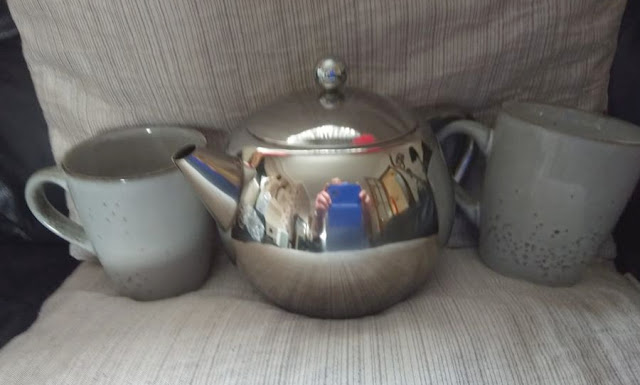 Rather than bore you with all my makes every day, most have which have already been shared then done a collage of them. 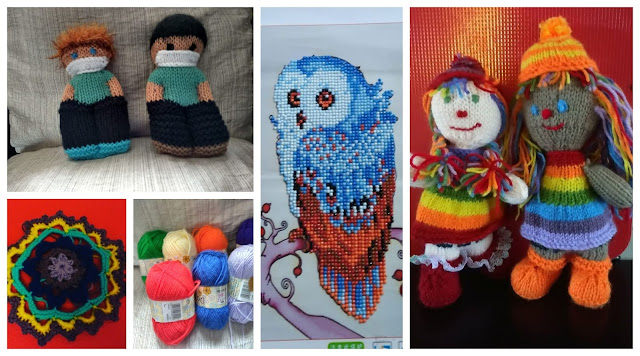 Two of the three NHS dolls, a mandala, the crocheting I tried out on Tuesday, balls of wool in rainbow colours that DDD3 bought, my diamond painting owl, and two rainbow dolls that have NHS 2020 on their bodies, these are for Spud and Dinky, will make a couple for here as well at some point.


You are invited to the Inlinkz link party!
Click here to enter
Posted by fun as a gran at 09:34