Been a rather frustrating week for a few reasons. Have had little or no time to craft and even less time to blog.

Something snapped inside the toilet cistern last night. Toilet will not flush. So there is now a jug in the bathroom with which to put water into the bucket that is also there as the bucket wont fit under the sink tap and we don't have a bath.
As I am now at work with nobody else on the same shift I have been using a staff well being room to take my breaks. A nice relaxing space. 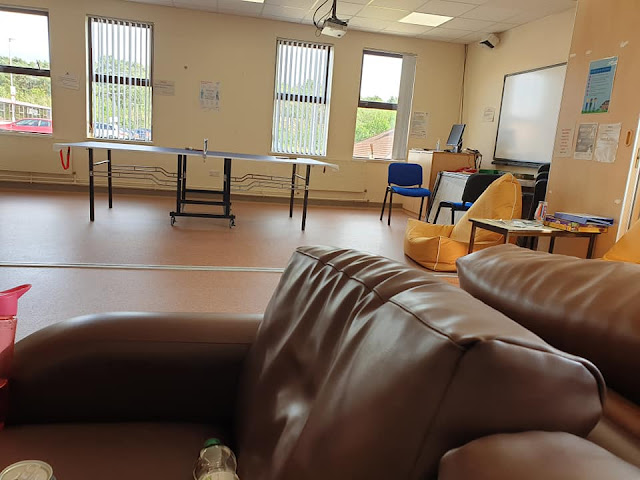 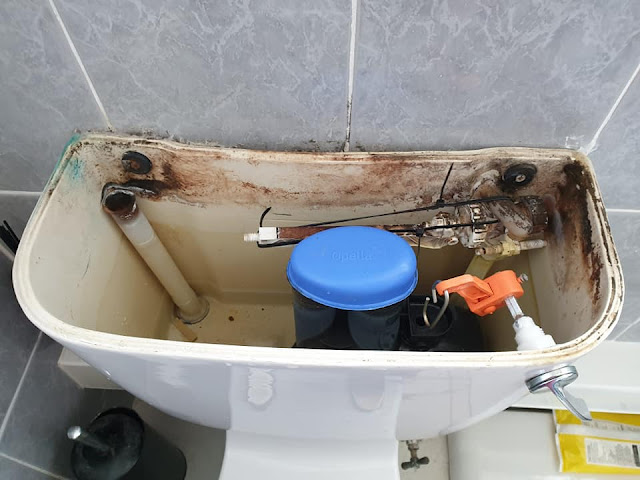 Phoned a second plumber, a relative of a neighbour. After discussion with him about cost etc as ours is an ancient bathroom is going to only cost £10 more to buy and replace with a new toilet than sort the other one, so a new toilet it is.
Ordered it, headed to Irvine to walk the dog and pick it up, cant pay in the shop got to be click and collect, and went to pick it up. Little did we realise that they had closed a road 200 yds before the industrial estate we wanted to get to, so had to follow diversion signs. Appeared to be two different sets of diversion signs and just ended up muddled up going round in circles. Tried google maps on the phone but she just kept trying to send us back the way we could not go. Cue 20 mins in the car with me trying to get us there. google maps telling me one thing, hubby yelling louder and louder and more aggressively  at google maps and at me while I am trying to concentrate on getting us there safely. Totally lost the plot with hubby and swore and yelled at him which is not like me and told him if he did not shut up he was getting thrown out of the car. Eventually stopped and spoke to a DPD driver who gave us the name of a road to head to instead and that got us there. We then needed to pick up something else from a different place on the same industrial estate but it was across a new road they were building and we needed to head back to the centre of the town. Decided that was not happening and it is still not picked up.

Lots of fields of thistles out and looking and smelling amazing.  Spotted this bee working hard. 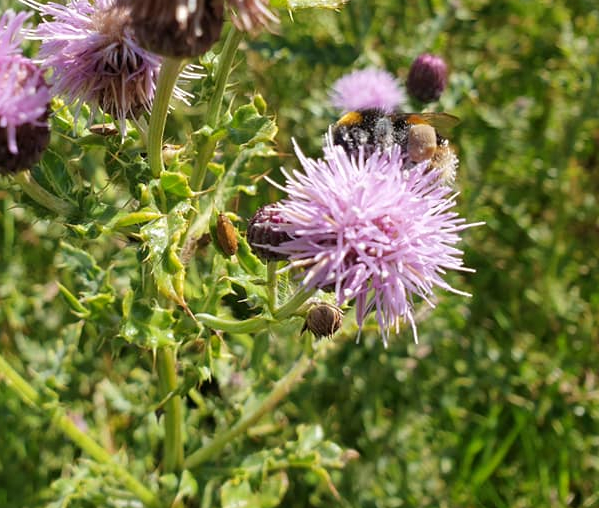 Finished off an Anna I made for Ziggy. It went wrong on all levels, wrong wool for hair, looks rather scary. Then once I had the arms and heads on the head looks wrong as the neck is only 4 stitches wide so looks wobbly and then when I sewed her skirt up realised the seam was down the front and her head and arms should of been round the other way but hey ho its finished. She is an upside down doll. I have now started a crochet one instead. Will pass her to Ziggy anyway, if she does not play with it fair enough but no point in binning it 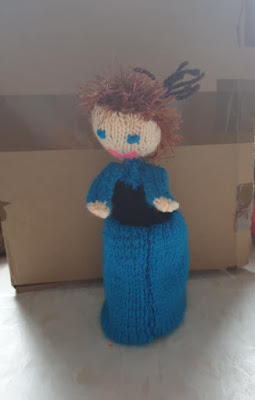 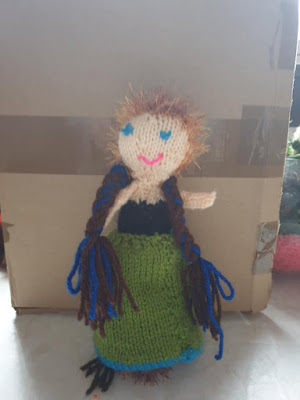 One new toilet fitted. Still need the parts to get our own coloured toilet seat back on. Also got the radiator taken off the wall and new taps put on the sink, they have only been dodgy since we moved in seven years ago and just never got round to it. Going to be fitting a heated towel rail instead.

Managed to get the wall where the old cistern was cleaned before the new one was fitted. New shiny taps on the sink.

I spent the morning working on the assessment I need to put in for The Carbon Literacy course I did. Not sure if I was making to much of it but it took a lot longer than I had thought. 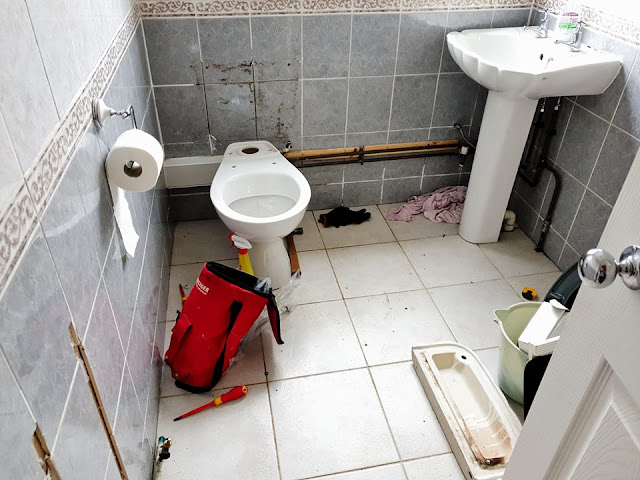 Nipped into town to pick a few bits up later in the day and went to look at tiles for the bathroom floor. Sadly nowhere seems to have much as they have not been getting supplies in. Guess the floor will have to wait another few months.

Up early, just after 6am, to finish off the carbon course.
Nipped into town to pick up a few bits and pieces and walk the dog.
Spent over an hour on the phone to the bank, an hour of my life stuck in 3 queues as they escalate the issue further up the layers of security. Trying to do a few jobs while on hold, was not to sure how well the battery would last on the cordless so I also had the corded phone off the hook so if the cordless one went dead I was still in the queue. Manage to get it sorted so can use my debit card again.

There is a series of these along the river walk. 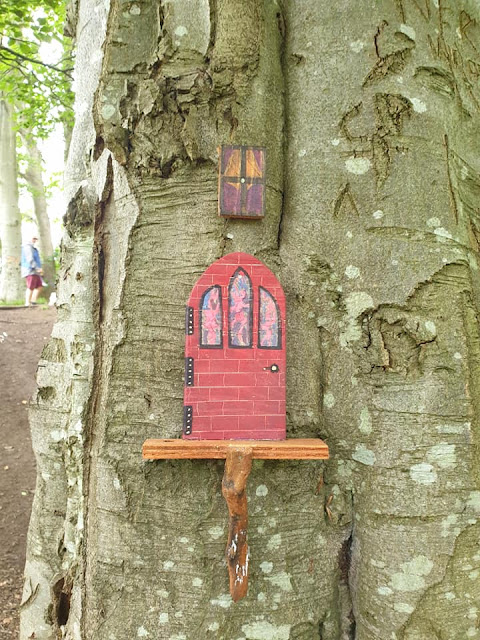 First day back on my normal hours. Ended up learning a new job role which I enjoyed.
Home just before three, showered had a sandwich and took a run to pick something up in Irvine. Walked the dog first, then back home to empty the car and go into Ayr to pick up a shower, home again via the chip shop. We knew the shower base was longer one side than the other but the longer side was on the wrong side and it wont fit behind the bathroom door. So that screws that plan up.

Bought the dog a new bed while we were out yesterday, so here she is lying on our quilt which is folded on the floor when it is to warm to have it on. 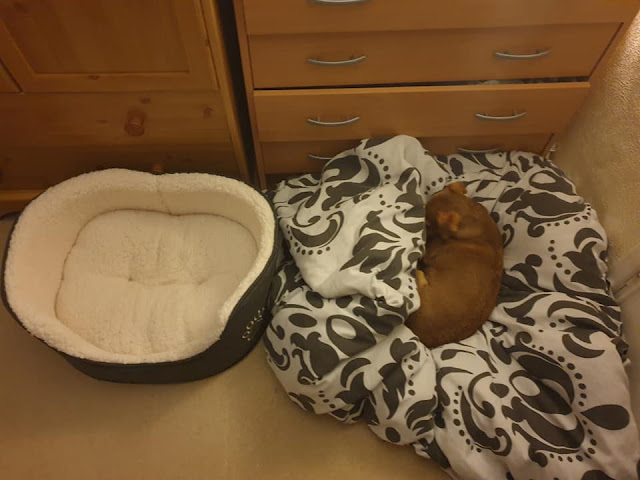 You are invited to the Inlinkz link party!
Click here to enter
Posted by fun as a gran at 18:28