having fun with Christmas themed baking

Was looking for something different to do with Bob as regards to Christmas. Why should he not have something Christmassy like every other child going?

So I made some biscuits, some meringues to make into snowmen and a snowscene to decorate.
The recipes for the biscuits and the meringue can be found over on my sponsoring site Healthy Supplies, and you can also place an order with them to buy the items I used.

I tried two different ways with the meringue to make snowmen. I tried one as a large blob with a smaller blob on top and cooked it like that, and the others I placed into cake cases for the bodies and petit four cases for the heads. These turned out a bit angular but never the less they worked out just fine.

After they decorated the biscuits they finished off the snowmen by painting on faces and buttons with kinnerton chocolate and paint brushes. 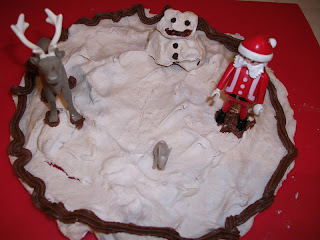 The snow scene was made by spreading meringue into a loose bottomed cake tin. It makes a great centre piece for a table. With hindsight I should have made two of these and put fruit and cream in the middle, but we just served it with fruit and Alpro soya single cream that we had available.

The biscuits I cut out using a Christmas tree shape and a star shape.

First up the children melted chocolate with which the stuck on the snowmens' heads. We used kinnerton chocolate so that they could be eaten by both the children.

I then let Bob decorate his first, Fifi made him some icing and we melted some orange carob, and gave him some cake decorations and let him loose.

Once his was finished Fifi made some more icing for herself and we melted some white cooking chocolate for her to use, the white looking more like snow than the brown Bob has to use.

Here are the finished results, and very nice they looked and tasted as well.

They loved every minute of it and a great time was had by all.

This is a review post but the findings are my own.