This week for us has mostly been about our hobby of geocaching. Only been into the hobby for a few short months now, and must admit we all lovesubject to argue over interest, gets us out and gives us exercise.
it. Gets us out, gives us a shared

But for us this week it has been fabulous because every year the geocaching powers that be put on an annual Mega Event, and this year it was in Ayrshire and Arran.  So how could we not join in with some of the events?

One of the events that is on this week is a Teddy Bears Picnic, with a teddy dressed in Tartan. We planned on taking the older two to this event, and when I came back from work tonight I found this sitting on the stairs waiting for me. 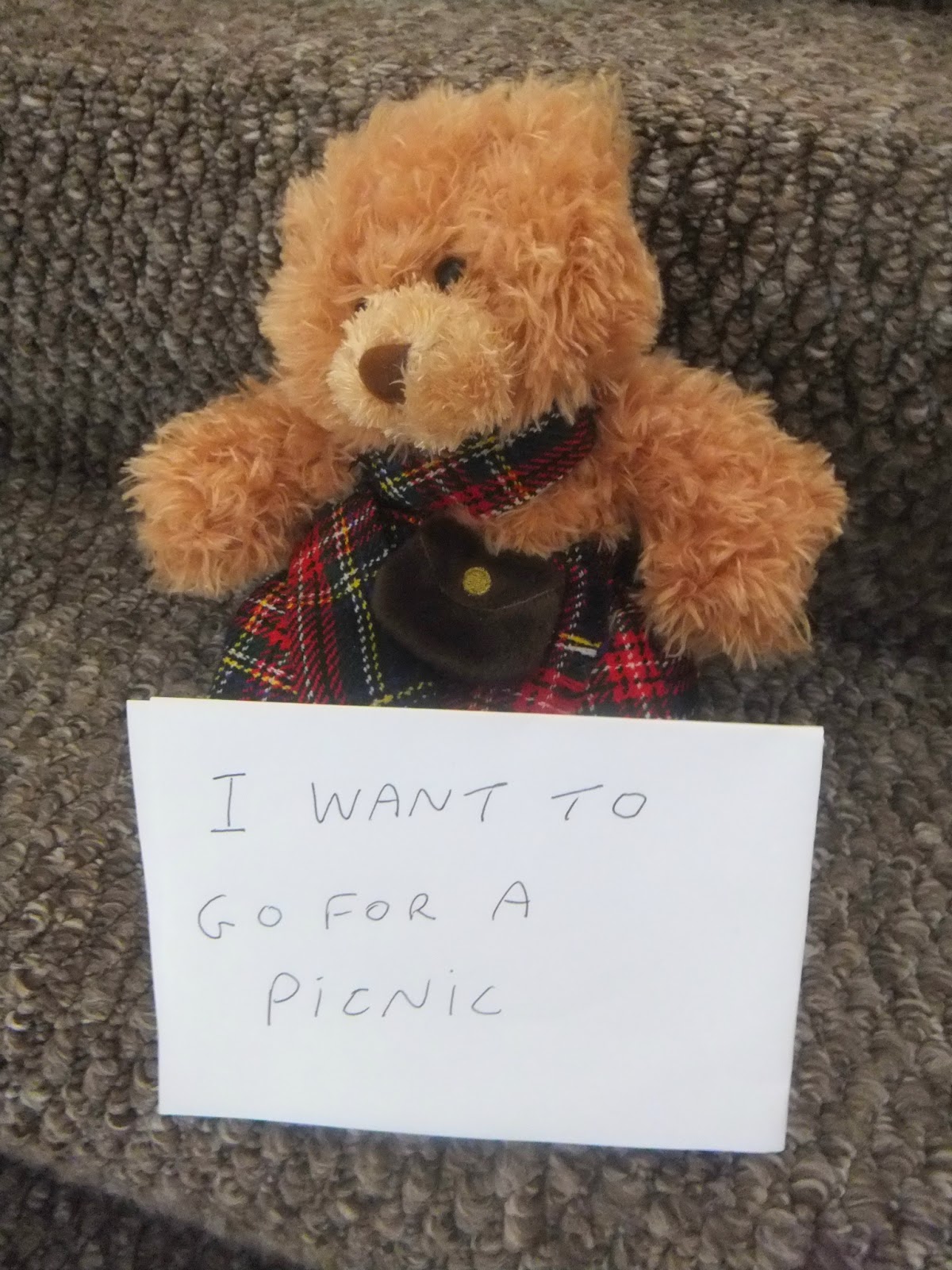 and yes he did get to go. 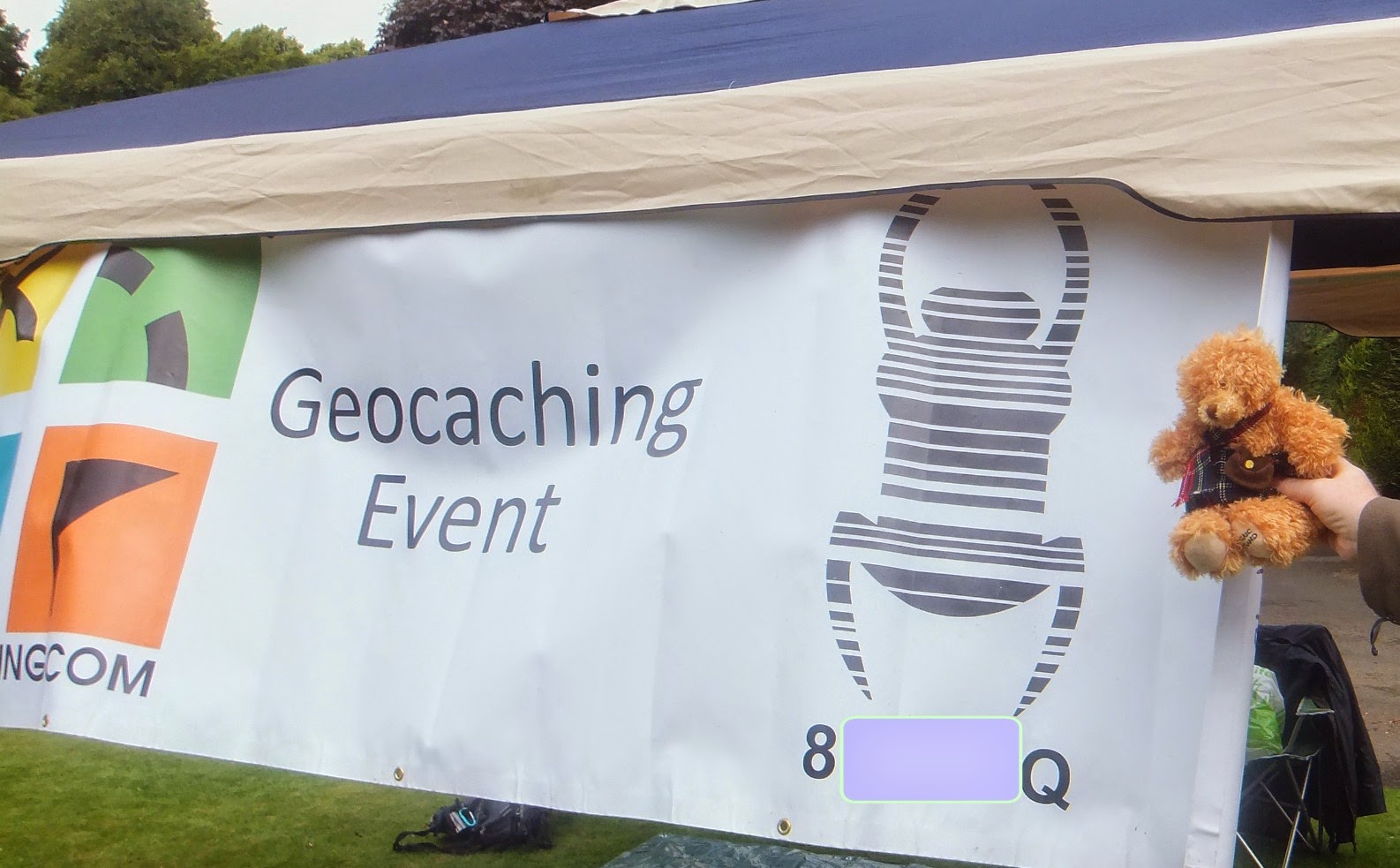 Daughter came round with Bob, Minky and Dinky to while away some time in the garden as it was such a lovely evening. We played magnetic darts with Bob and watered him with the hose as we watered the plants. The twins were getting a tour of what we were growing.

Today we went on a Mega Event. A nice local one, doing a tour round The Rabbie Burns Trail. We have walked round here on our own many a time, but never before done the tour that they offer. So we did the tour and picked up some geocaches on the way, including the one at the mouse that I have been unable to find for a long while now. One of the others in the group found it and we all signed it.

I had decided that I wanted my 200th cache find to be one of the local mega events. So to push us nearer to that 200 we went out caching. We wandered off to do some more at Dundonald as we knew the area and they were all in a straight line so should be easier enough to find.  It was quite funny we had been looking for one for nearly fifteen minutes and were on the verge of giving up, when along came another group of cachers, mum, dad and three kids. One of these children managed to find the cache in less than a minute - talk about embarrassing. But further along the trail we helped them find a couple they were struggling with so great team work. We met this chap while looking for a cache.

The plan for today had been to take Fifi and Bob to the teddy bears picnic. But a phone call from daughter to tell me Minky had Rotovirus. Would explain why he had not been feeling well for a few days. Anyway it ruled out me taking the older two as it would mean I could not work on Saturday.

So we toddled off to the picnic, had some fun and picked up a few caches.

Thursday evening we wanted to go along to the duck race that is also part of the mega. But as we drove into the park it started raining. But we  decided as we were there we would put on our waterproofs, do the caching trail we had intended and attend the duck race. The atmosphere was amazing, the kids were all shouting and cheering,and the adults joined in. Our duck did not win but never mind.

Sorry I am becoming tedious now. But there is one cache locally that I went and looked for. Whilst in the area the other day I decided to pick it up. But there must have been two in the same place - there shouldn't be - and I found the wrong one. So today I went back and found the one that should be there!!

The major event of the Mega was on today. I have ever been to a Mega and not sure I will ever get to another one. So as I have a break from work between two and four I decided I would pop along and see what happens there.
Sadly it rained, and rained a bit more, so time I got there a lot of it was over. But I met with a few people I knew from previous events and met some new faces to.
This chap was wandering round the hall giving everybody a hug, and the lady in the foreground (you can see her arm and her camera)  was taking your photo for their own records. So I got a hug and my picture taken too. 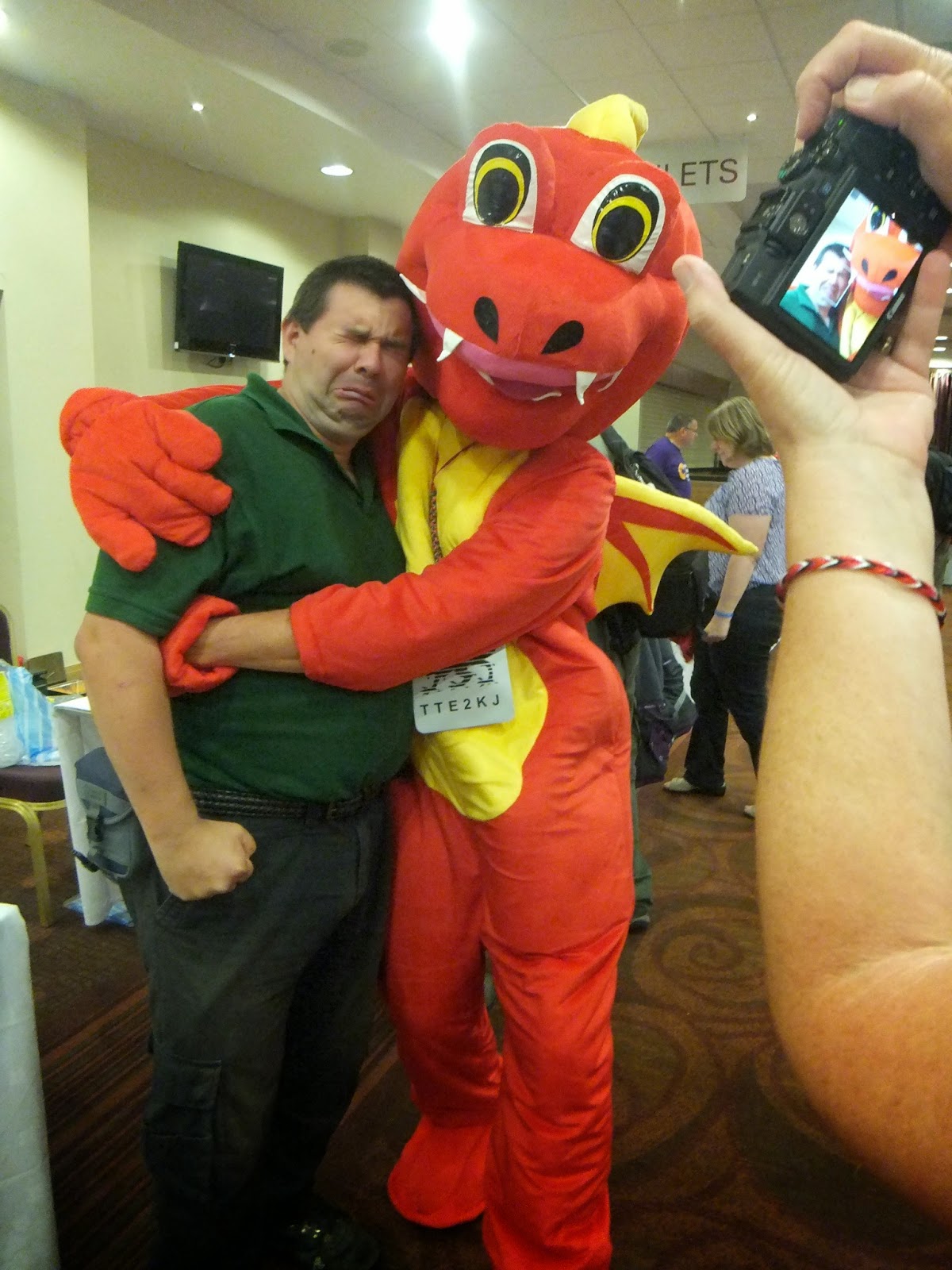